Hello everyone. It's #IMWAYR time again, when readers share what they have been reading and find out what others have been up to in the past week. Kathryn hosts the adult version of this meme at Book Date. Jen at Teach Mentor Texts and Kellee and Ricki at Unleashing Readers host the kidlit rendition. Whatever you are looking forward to in your next great read, these are fabulous places to start your search. 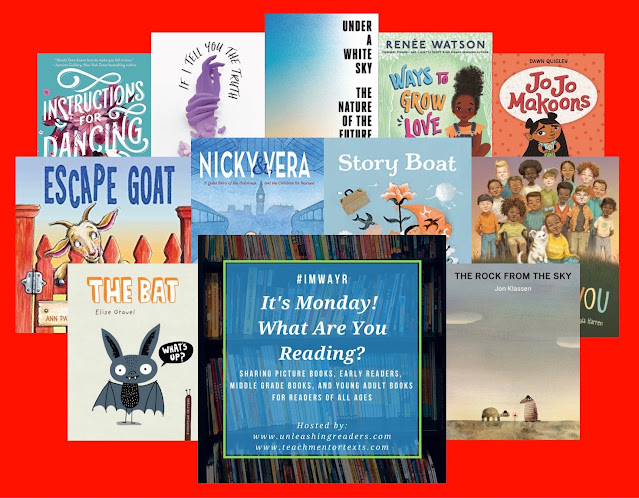 The world is on fire. At least, our part of it is. As of Sunday, we have 1,217 fires burning in our province. One of them is raging across the valley from where I live. So far it has burned 6,871.8 hectares (16,980.6 acres) It's moved from the grassland areas where people live into the treed area above it. On Sunday evening we sat on our front lawns with friends. Looking through our binoculars, we watched trees candling. I wept. 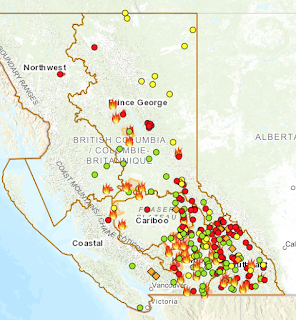 Titles with a 🍁 indicate this is a Canadian or Indigenous Canadian Author and or Illustrator.

PICTURE BOOKS
A Boy Like You by Frank Murphy & Kayla Harren (Illustrator)
This book features a diversity of boys engaged in all kinds of activities. They all focus on positive attributes. The books works to eliminate toxic masculinity from boys and men.
Story Boat by Kyo Maclear & Rashin Kheiriyeh (Illustrations) 🍁

A family of refugees makes their home in different places on a daily basis. It’s the small things: a special cup, blanket, or light, that comfort them.
Rashin Kheiriyeh’s lovely artwork “was created with the coloured pencil and watercolour, oil and acrylic paint and painted paper, with additional natural materials including wood, wall and cut paper.”

When this adorable goat decides it wants to see more of the world, it ends up getting accused of all kinds of things it didn’t do. I loved Robin Preiss Glaser‘s detailed artwork. She used ink and watercolour to create these illustrations. Many thanks to Shaye Miller for turning me onto this book.
The Rock from the Sky by Jon Klassen 🍁

This is dark and weird and screamingly hilarious.
NON FICTION PICTURE BOOKS
The Bat by Elise Gravel 🍁
Elise Gravel creates absolutely delightful nonfiction titles for younger readers. They are so much fun, you hardly know you are learning. She proves that bats are fascinating in this one. I appreciate that she even mentions how we humans are threatening bats with extinction.
Nicky & Vera: A Quiet Hero of the Holocaust and the Children He Rescued by Peter Sís

I knew about the kindertransport, but this similar story is new to me. Nicolas Winton was a young man in 1938 when he arranged for 669 Jewish children to leave Czechoslovakia before the German invasion. Vera is one of the young girls he saved. This beautiful book, that celebrates the good that an ordinary person can do, gave me shivers.
CHAPTER BOOKS
Jo Jo Makoons: The Used-to-Be Best Friend by Dawn Quigley & Tara Audibert (Illustrations) 🍁

Jo Jo is a first grade Ojibwe girl. Her first best friend is a cat. She’s not sure about Fern, her school best friend. At the same time as this book is delightfully funny, it also deals with the important topic of how to be a friend.

There is less cooking in this second Ryan Hart novel, but that's because Ryan has so much going on in her life! Her pregnant mom is on bed rest so she spends more time with her Grandma. She's busy reading books from the library for their summer reading program. There is the excitement of summer camp with her best friends. It isn't until the end of the book that we see this young chef cooking up a storm again.
Ryan learns a lot about caring for all your neighbours, even the ones you don't know. She comes to understand forgiveness. At the end of the book, Ryan discovers the overwhelming love of a baby sister when she arrives.
Instructions for Dancing by Nicola Yoon & Bahni Turpin (Narrator)

Every time I read something by Nicola Yoon, I fall more in love with her writing. If you add Bahni Turpin's narration into the mix, you get about as close to perfection as is possible.

I thought this would be a light fun romance. I needed it after all the intense adult nonfiction I've been reading. It has many of the aspects of a fun filled romcom. It's even got a bit of magic.

Ever since Evie Thomas caught her father kissing another woman, she doesn't believe in romance. Then she developed the ability to read the past and future of kissing couples. None of them have had happy endings. This new ability of hers led her to a dance studio where she ended up partnering with X, a gorgeous young man. The two of them enter a dance contest. Of course they fall in love. It seems perfect until Evie has one of her visions while the two of them are kissing.

What suprised me about this book is how deeply it looks into the nature of love. It's a lot about forgiveness, living for the moment, and embracing the love you get for however long you are lucky enough to have it.

If I Tell You the Truth by Jasmin Kaur 🍁
This book deals with sexual assault.
Kiran Kaur was raped by her brother in law to be, a police officer, when she was still in Punjab. She left to go to Simon Fraser University, and didn't tell her mother about her pregnancy til she had safely arrived in Canada. Her mother doesn't believe her.
Kiran was lucky to make a good friend, Joti, at university. Kiran moved into their house and Joti's family became Kiran and her daughter, Sahaara's family.
Kiran remained in Canada as an undocumented immigrant while Sahaara grew up. When Sahaara was eighteen, Kiran was picked up by border officials. This is when Sahaara learned about her mother's history.
This book tells the stories of Kiran and Sahaara. At first Sahaara wonders about who her father was, and then when she finds out she struggles with hating herself.
This is written in both poetry and prose. It's intense - so intense that I could only read it in bits and pieces. It's an emotionally hard read that speaks authentically about the reality of sexual assault and it's ramification for survivors. It's a story of love, survival, and speaking your truth.
NON FICTION
Under a White Sky: The Nature of the Future by Elizabeth Kolbert & Rebecca Lowman (Narrator)
“This [is] has been a book about people trying to solve problems created by people trying to solve problems.”

We are living in the Anthropocene age. In our meddling with ecosystems, we always end up making things worse. We have destroyed our planet to such an extent, that we have put our species at great risk. A review in the New York Times states, "Leaving the natural world to repair itself isn’t an option anymore — or, at least, it’s not an acceptable one, considering the death and suffering that would inevitably ensue."
Kolbert writes about different mega projects either in the works, or in the research stage, in an effort to mitigate the worst of the damage. All this just so we can save ourselves from ourselves. She shows us an electrified river created to keep the voracious Asian Carp out the the great lakes water system. She talks about the terraforming attempts to return land to the areas around New Orleans. There are attempts to remove carbon from the atmosphere and turn it into rocks, ideas for seeding the atmosphere with diamonds, and projects to genetically modify coral polyps in hopes of saving the Great Barrier Reef. It isn't very hopeful.
As I finish this we have another wildfire burning out of control across the valley from us. It's the fourth fire in our vicinity this year. We haven't even reached the traditional fire season yet. While Kolbert didn't talk about fires in her book, I can’t help but make the connection between the constant roar of the helicopters and airplanes in the air here trying to keep us safe and what it's costing us to cope with this aspect of the climate crisis.
CURRENTLY
Code Name Hélène by Ariel Lawhon with Barrie Kreinik & Peter Ganim (Narrators)
The Disability Experience: Working Toward Belonging by Hannalora Leavitt
History Is Delicious by Joshua Lurie
UP NEXT
The Fabulous Zed Watson! by Kevin Sylvester & Basil Sylvester
Bruised by Tanya Boteju
I'll continue to work at getting the picture book pile under control.
BLOG POSTS PLANNED FOR NEXT WEEK
A Kid Is a Kid Is a Kid by Sara O'Leary
History Is Delicious by Joshua Lurie
PROGRESS ON MY READING GOALS