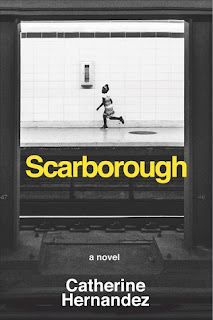 Upon finishing this novel I was reminded of this line by Sherman Alexie, "If it's fiction it must be true."

Scarborough is a diverse cultural community within Toronto, Ontario, a major city in Canada. This novel is about a low income community who live in or near a shelter in the neighbourhood. It centres around a group of families and children who live in the shelter and attend a literacy/breakfast program run by a Muslim woman, Miss Hina.

Hina and three children, Laura, Sylvie and Bernard, the primary characters, are introduced to us first.

Laura's mother packs up Laura and her things and drops her off at a bowling alley for her father, Cory, to pick her up. Cory is a poor, white, alcoholic, aging skinhead. He loves his daughter, but has no idea how to be a parent.

Sylvie, an indigenous child, and her mother, Marie, are rushing home to the shelter from a doctor's appointment where Maria was trying to get help for her three year old, Johnny, who she knows has something wrong with him.

Bing, a gifted Filipino boy, waits for his mother, Edna, in the nail salon where she works, and remembers the day they fled from his crazed father.

Hina is hired for the position of Program Facilitator at the Rouge Hill Public School location of the Ontario Reads Literacy Program.

Their stories unfold through multiple perspectives. Not only do we see the world through the lenses of these primary characters, we see it through the eyes of their parent’s and other front line workers. This patchwork of voices enables the reader to more fully comprehend the inhabitants, how they function individually and as a collective. It reads like a series of connected vignettes that grabbed me by the throat and forced me to bear witness to these many different lives as they experience racism, despair, tragedy, friendship, and success. As a teacher I understand that parents, except in very rare circumstances, always do the best they can for their children. Despite the hardships, this is abundantly clear here.

I cried. I laughed. I rejoiced.

For some of these children, their lives only get better when they die. This line near the end, continues to haunts me.
"It feels so good to hug someone who will never hit you."

Hernandez' writing is brilliant. In an interview with Susan G. Cole from Now, she stated, "If I’m not shit-disturbing, what’s the fucking point in writing?” I hope she continues doing both for a very long time. 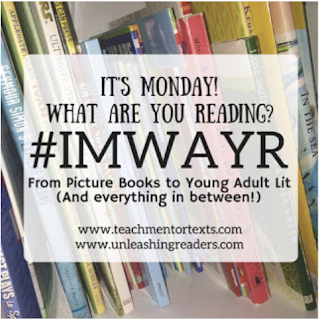 It was an intense reading week for me. The adult novels left me reeling. I abandoned Last Night I Sang to the Monster because even though it was an ebook, I couldn't make the font larger. This probably isn't a problem when you are young, but even with my reading glasses on, small print is a serious challenge for me. It won't be long and I won't even add books to my want to read list unless it is available in either audio or large print format.

The Fan brother's illustrations are just jaw droppingly beautiful in this book. It's a deeply philosophical narrative about a wolf and other animals who head off on a ship in search of the perfect island. While I liked it well enough, I'm not sure this will work with younger students. However, it would be interesting to share with intermediate age students to see what they make of it.

This is a beautiful book that reminds us to live in the moment and enjoy and love what we are doing now to its fullest.

This humorous book presents is with a cat who thinks it is much better than a dog. Eventually, after living with a dog for a while, it changes its mind. The simple bright coloured cartoons are lots of fun.

When a young dragon, Zigoo, ends up with a cold, his grandmother sends him off to see a human doctor. The doctor, worried about what the dragon might do to his office, refers him to another specialist. This continues until the dragon’s cold starts to go away on its own. In the end, Zigoo manages to get his fire back in a way that makes the humans start to appreciate him.

If You Ever Want to Bring a Circus to the Library, Don't! by Elise Parsley

Libraries may not be the quiet places many people think they are, but a circus in a library is still too much for all kinds of reasons. This funny book lets readers know what they are. This is from the author of If You Ever Want to Bring an Alligator to School, Don't! If you liked that one, you will enjoy this.

My Friend Lucky by David Milgrim

I would snap this book up in a heartbeat if I were still in the library. It is a delightful book about a boy and his dog. Each page has two words on it starting with Lucky. Each two page spread presents opposites. This makes it perfect for emerging readers who can engage with the text meaningfully. The humour and love in the pages will make it a favourite so they will happily reread it!

I am madly in love with these two fictional boys. How I wish that this book had been around when my own two sons were younger. Charlie and Mouse are two brothers who live in a loving family. The four little stories are just charming in their simplicity.
Emily Hughes' illustrations are the icing on the cake. She captures an innocence in childhood and shows us a diverse cultural community living together in harmony.

The Authentics by Abdi Nazemian

I enjoyed this book about an Iranian girl growing up in LA.Her parents are financially well off and Daria seems to live a charmed life with her group of diverse friends who call themselves The Authentics. When their class is asked to do a genealogy report for high school, the group decides to get genetic testing to add to their reports. Daria's results come as a shock and leave her wondering who she really is.
I appreciate the diverse group of characters included in this book. I like the backdrops of Iranian and Mexican culture. I especially appreciate that by the end of the novel all the characters have transformed in some way or another.

I read this book after finishing Jesmyn Ward's novel. (See below) It was the perfect sequel. Sure it made me cry, but this is ultimately a story of hope. It is the tale of a young white girl and her family who return to her parent's home town to look after her grandmother, who has Alzheimers. Alice connects with their elderly black neighbour, Miss Millie, who helps her make friends and cope with her feelings about the move and her absent father.

This is a powerful novel about families living in a low income neighbourhood in Toronto. I've got a full review just about ready to post.

I had no idea there was even such a thing as Southern Gothic until I read this book. If that means anything to you, then you will know something about what to expect. I'm hoping to have a more in depth review for this up next week.
Nothing I can write will ever do justice to it.

Saving Marty By Paul Griffin is the audiobook that is next on my list. The First Rule of Punk by Celia C. Perez is on top of my to read with my eyes pile.