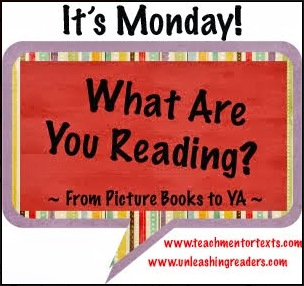 Today is Monday; time for #IMWAYR. It's when bloggers write about the books they have been reading in the past week. Beware that reading these posts can become addictive and expensive. Jen from Teach Mentor Texts and Kellee and Rickie from Unleashing Readers host this weekly event. Check out their blogs for links to the many participants.


It was a successful reading week for me. I managed to:
I will purchase three of the following picture books  for our school library when I have funds again.

Froodle by Antoinette Portis
What happens when one creature defies the rules they are to abide by? In this case, when a little brown bird decides that peep is no longer the only song it wants to sing, it foments a revolution. Making change is never easy. Feathers will get rustled. Unfortunately, even though the other birds start to have fun creating their own new songs, Crow is not happy with this.


Portis' illustration are amazing. Note the threat portrayed in the power imbalance in this standoff between the crow and the little brown bird.

There is a powerful idea seeded through this book, but it is counterbalanced and seasoned with lots of hilarity.
You will have to read the book yourself to find out how the situation is resolved.


The Case For Loving by Selina Alko Illustrated by Sean Qualls and Seling Alko
This is such an important book. It celebrates diversity as it presents a history lesson on marriage rights in the USA. It tells the story of Richard Loving and Mildred Jeter, a mixed race couple who took their case all the way to the supreme court so that they could live wherever they wanted, and other couples like them, could get married.
The illustrations reflect the intensity of the situation - being light and filled with hearts and flowers when Richard and MIldred's life is going well, and then dark when outside forces try to harm them.
Reading the author's notes at the end is worthwhile. It reveals that the book was created by another interracial couple who were able to marry "with great ease" in 2003, thanks to the earlier struggles of Mildred and Richard.

The Farmer and the Clown by Marla Frazee
I'm sure glad that so many people have blogged and carried on about this book because to be honest, I wouldn't have picked it up alone. The front cover turned me off for some reason. Of course, now that I've read the book, I have come to appreciate it. I concur that this is a poignant sweet book. At first it didn't really ring true for me. I thought, who in their right mind would lose a baby and not go immediately back to search for it? Then when I reread it I realized that the circus returns within 24 hours. Whew! I have a copy on order for when I get some money. I look forward to sharing it with children.

As an Oak Grows by G. Brian Karas
I wonder if I am not so impressed with this book because earlier readers, like Elizabeth Ellington, have pointed out how superficially Native Peoples history is recorded.  I suspect that Pete Seeger, who the book is dedicated to, might be disheartened. The book takes us through 200 years in an oak tree's life. As the tree grows, the world around it changes. Although I enjoyed the details in the images, I prefer how Virginia Lee Burton's The Little House, reveals the impact of change over time.

Finding good beginning chapter books is one the most critical thing I do as a librarian. One of these days I will have to blog about my favourites. (although I'm sure it has already been done somewhere.)

Dora Fantasmagory by Abby Hanlon
Dory, our narrator, is an amazing character. She is the youngest of three children. I have to admit that as much as I admire her creativity, I'm kind of thankful that I am neither her sibling nor her parent. Dora is the kind of brilliantly imaginative child who will drive parents and teachers slightly wacko. She wants to be included in everything and is full of questions. She fluctuates between the worlds of fantasy and reality. I suspect that fans of Calvin and Hobbs will love Dory.

The Terrible Two by
I've tried to get into this book a couple of times, but so far, it just hasn't really worked for me. I'm going to pass it on to one of our male teachers of grade 2/3/4 and get his feedback. The truth is, even as the mother of two boys, almost 40 years of marriage to the same man, and reaching the ripe old age of almost 62, I still really don't understand boys and their humour.

Skim by Mariko & Jillian Tamaki
I am so thankful I purchased Skim at Serendipity this year after Mariko Tamaki spoke about it. It is a powerful graphic novel. Kimberly Keiko Cameron, (Skim) the protagonist, goes to an all girls religious high-school. The novel begins with the suicide of one of the girl's ex-boyfriends. The Tamaki cousins brilliantly reveal how this event echoes across the actions of everyone in the school for the next year. At the same time, they take a hard look at racism, body image, sexual identity, first love and the secrets people keep. Skim examines how we make assumptions about people because of the way they look. This book is beautiful and dark and oh so very much real. I'm thinking it might just be the book I give away to my teenage great nieces next year.

Skink by Carl Hiaasen
While I always enjoy a Carl Hiaasen read, parts of this one didn't ring true for me. Honestly, I can't believe that anyone in this day and age isn't more internet savvy than Malley, Richard's cousin is made out to be. It's such a contradiction as she is also portrayed as an independent, smart girl. In this respect her character and the situation she ended up in, just didn't make sense. I wondered what readers at my school might think about it so I asked some of our grade seven girls if they knew anything about chat rooms. They told me they were some old fashioned way people used to talk to each other on the internet. Enough said.
In spite of this, there is a lot to like about this book. It's got adventure, suspense, action, and Skink, as ever, is a mythical character. But, because of my aforementioned concerns, the rest of the novel didn't work as well as an Hiassen novel would ordinarily do for me.

Right Now I'm listening to The Search for the Red Dragon by James A Owen. It's ok, but won't pass the bechdel test. Reading with my eyes, I'm in the middle of the most beautiful heartbreaking book, This Journal Belongs to Ratchett by Nancy J Cavanaugh. 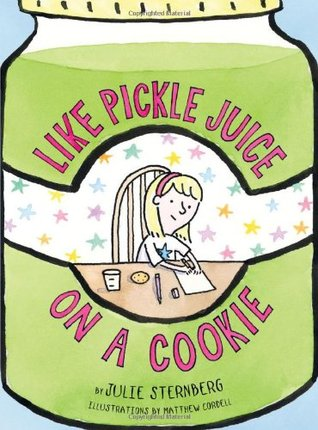 I really loved this sweet little chapter book. I loved the characters. I loved that it dealt with a serious issue that many children will be able to connect to. I loved that our narrator, 8 year old Eleanor Abigail Kane (Ellie) is surrounded by loving sensitive adults.

Eleanor's first babysitter, Bibi, has to move away to take care of her sick father. This is a very bad thing to happen. The story takes us through Ellie's grieving for Bibi, and into the realization that there are many ways and people to love.

I can't wait to read more in this series.

At a reading level of grade 2.5, this book is ideal for readers just transitioning into chapter books. Because it deals with real issues, if I can find it in paperback, I'll purchase a literature circle set for those younger readers.
Posted by Cheriee Weichel No comments: