Last week I worked at Dickens and introduced two different groups of children to writing Haynuku poems. The first group were grade 3 & 4 and the second group was grade 1 & 2. I was impressed by all their work.

For Today's post I am sharing some of these poems.

First I showed them a few examples I had written. Then we wrote a few together. Finally they went off to write individually or in pairs.

A few of my examples:

showers
power the
earth with flowers

The primary class had been studying shadows and light so while their student teacher was teaching, I wrote a few on that topic

shadow
in front
light behind me

I wrote this one on the spot for one of the little ones who came in looking like a good wash was in order.

dirt
on face
proof of fun

He went on to write his own and put in soccer is fun.

When we started writing together, at first I picked the first word. Together we brainstormed ideas about the word and while at first I put them in order, after a few, the group came up with ideas for what to put in.

Some poems we wrote together:

blue
is rain
falling inside me

september
is back
to school time

Some of the students began by copying the poems we wrote together and then went on to writing their own. Here are some they finished that I managed to take pictures of. Unfortunately I didn't take photos of the older students poems and haven't been back to the school since. 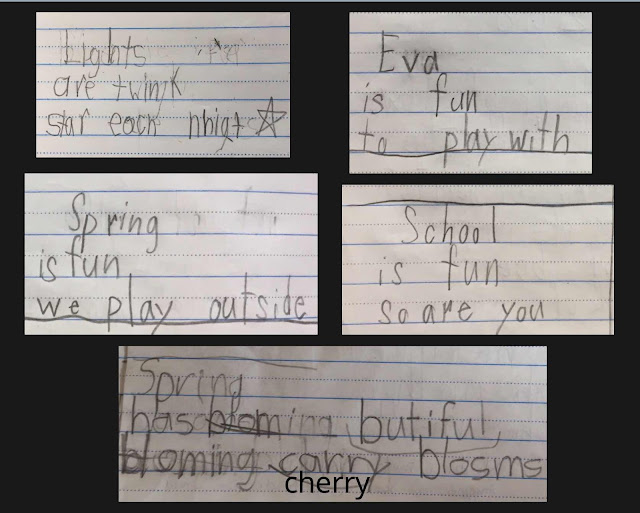 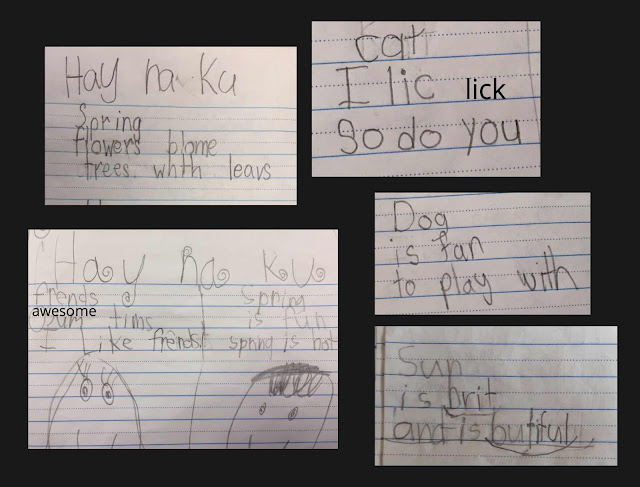 I was fascinated to watch one of the primary students who seemed unable to stop writing poems. When the rest of the class had finished and were busily engaged in outputs activities, she moved to a quiet spot to continue writing. At one point she stared, unseeing, out the window before returning to her notebook and scribbling down another poem.

These are some of her poems.


According to Robert Lee Brewer at Writer's digest"


"Hay(na)ku is a very simple poetic form, and it’s also one of the newest. It was apparently created in 2003 by poet Eileen Tabios.

Hay(na)ku is a 3-line poem with one word in the first line, two words in the second, and three in the third. There are no restrictions beyond this.

There are already some variations of this new poetic form. For instance, a reverse hay(na)ku has lines of three, two, and one word(s) for lines one, two, and three respectively. Also, multiple hay(na)ku can be chained together to form longer poems."