The Graveyard Hounds written by Vi Hughes and illustrated by Christina Leist is a spooky mystery. This easy to read novel begins, as all truly scary novels should, with a violent lightning storm.  Afterwards strange things start happening at Annie and Mike's school. Then dogs start losing their bark.

I found Malice by Chris Wooding to be painfully terrifying. This is a novel best read by students in grades 6 and up who are not faint of heart. It's the story of teenagers tempting fate and getting trapped inside an horrific comic world where they are forced to fight for their lives. 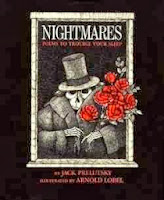 The first time I read Nightmares: Poems to Trouble your Sleep by Jack Prelutsky, (published in 1976) I fell in love with it. It remains my favourite Halloween poetry book to this day. It contains descriptive poetry about witches, werewolves, zombies, vampires and more. One of the most terrifying is The Ghoul. 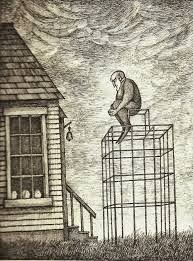 "The gruesome ghoul, the grisly ghoul,
without the slightest noise
waits patiently beside the school
to feast on girls and boys

He lunges fiercely though the air
as they come out to play,
and grabs a couple by the hair
and drags them far away.

He cracks their bones and snaps their backs
and squeezes out their lungs,
he chews their thumbs like candy snacks
and pulls apart their tongues....."

My favourite time of year is approaching. There is something magical about Halloween. Maybe it's the playing around with what's real and what's not. Perhaps it's about the potential for safely exploring the darker side of the cosmos. Whatever it is, it is pure fun!

Here are some seasonal books that I adore.

Our newest addition to the collection is Halloween Hustle by Charlotte Gunnufson. The rhythm and rhyming make this book a pleasure to read out loud. Will skeleton make it to the Halloween party in time? 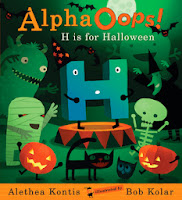 AlphaOops written by Alethea Kontis and illustrated by Bob Kolar is another of my new favourites. It is a delightful alphabet book with a twist.  The letters, dressed up for Halloween, are in a play, but do not come in the usual order.
Kontis has some fun activities that accompany the text here. 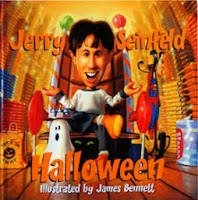 Halloween by Jerry Seinfeld is a hilarious picture book that is enjoyed by older students and adults alike. Seinfeld reminisces on his younger self partaking of the festivities of the season. Guaranteed to make you laugh out loud. 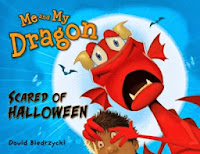 Me and My Dragon: Scared of Halloween by David Biedryzycki is another new title in our collection. In this charming tale, a boy helps his dragon overcome his fears of Halloween.


My old time favourites are the series of Old Witch books written in the1960's and 1970's by Ida Delage. These charming tales about an old witch and her neighbours reveal the best and worst in human nature. At the same time, you can't help but laugh at her antics and cheer her on.

Last summer I became addicted to Nancy Springer's Enola Holmes series. I just finished the entire collection. It was the perfect light summer reading. To be honest, it took me a bit to get into the first book, but by the end I was hooked. It wasn't difficult really since I am a fan of mysteries of all kinds so long as they are not too scary.


Enola Holmes is Sherlock Holmes' younger sister. Their mother left to live with the Gypsies when Enola was 14 years old. When Sherlock and their older brother, Mycroft, intended to send her off to boarding school to become 'a proper lady', she was forced to run away. Enola moved to London where she set up a detective agency of her own (under a pseudonym) that focused on finding missing people. At times she was in direct competition with Sherlock. At all times she must be wary of being tricked and dragged back home and off to school by her brothers.

I love this 'what if' take on the Sherlock Holmes classic. It has a great character in Enola Holmes who is a spunky, smart, and independent. She is an excellent role model for girls in our times. I love that she has a social conscience and tries to help out the many poor and disadvantaged in 19th century London. I am impressed by how she uses disguises to fit into the different parts of London in order to solve her cases and save the day. What I especially enjoyed is that while Enola is seen by herself and others as rather homely, she is capable of using great artifice to make herself so beautiful that her brothers do not recognize her. This is a delightful dig at 19th century as well as more modern conceptions of beauty.

On top of all this the stories have great plots filled with all kinds  fabulous secondary characters.

I was heartbroken when I finished the series. It felt like saying goodbye to a new friend.
Posted by Cheriee Weichel No comments:
Email ThisBlogThis!Share to TwitterShare to FacebookShare to Pinterest
Newer Posts Older Posts Home
Subscribe to: Posts (Atom)