The Hunchback Assignments by Arthur Slade 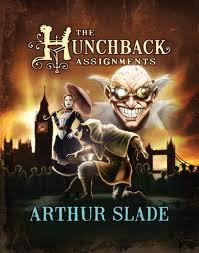 This book has been in the library for some time, but the cover turned me off. I should have known better since I loved Dust, one of Arthur Slade’s earlier works. It‘s my increasing fascination for steam punk that made me decide to give this book a try.
I was not disappointed.
Rumors of an extraordinary creature sent Mr. Socrates to a Gypsy freak show where he discovered a malformed, grotesque infant inside a cage. Disappointed, he was turning to leave when the child managed to shape shift his features to make himself look less hideous.
Mr. Socrates purchased the child and brought him to England were he was raised to be a secret agent. Two caretakers, his nanny, Mrs. Finchley, and Tharpa, his martial arts instructor, accepted him as he is. By the age of 14 Modo, can transform his body and facial features for periods of time.
He is tested by being dropped of in the center of London with nothing but the clothes on his back. It is the first time Modo has been out of his house, never mind such a large city, yet he survived and created employment for himself as a finder.
Then a young woman asks him to find out what her brother is up to when he goes out at night. Modo follows the young man to a house but in his attempt to infiltrate the group, is exposed. Following a brief encounter with strange steam powered super men and the evil Miss Hakkandottir and her robotic hand, he is chained to a wall and left to die in a burning building.
He barely escapes and manages to make it back to his room. When he tracks down the young woman who sent him on the quest it turns out that she is also one of Mr. Socrates secret agents.
Octvia and Modo are caught up in the middle of a struggle between Mr. Socrates and his Permanent Association, and The Clockwork Guild run by Mrs. Hakkandottir and an evil genius scientist, Dr Hyde.
Children all over London have gone missing - kidnapped by Dr. Hyde to be used as experiments for his nefarious purposes.
Then Mr. Socrates and Tharper go missing and it is left for the two children to save the day.

I was drawn into the book from the first  because of the air of mystery. What I ended up really enjoying was how well Modo and Octavia are developed as characters. I also loved the adventure, the suspense, and of course the hint of romance.

Can’t wait to get my hands on The Dark Deep, the next one in the series.

If you want to find out more, check out the website where you can read and or listen to parts of the book and or watch videos.

Thanks to Maryanne for sending me the link to this video.

We won't be doing this at Dickens' library any  time soon!

Icefall by Matthew J KirbyI didn’t love it, but I liked it a lot. It was indeed a fine read. It is about betrayal. It is about telling stories. It is about becoming who you are meant to be. It is about looking below the surface to find people as they really are. It is a suspenseful mystery. There, that sounds good doesn’t it? It is beautifully written. Viking history and sense of place in time are elegantly portrayed. “The fjord is freezing over. I watch it from the cliff near our hall, and each day the ice claims more of the narrow winding of ocean. It squeezes out the waves and the blue-black water, while it squeezes us in. Just as Father intended it to. Winter is here to wall us up, to bury us in snow and keep us safe. Today, there is a cold wind that bears no other smell but the ghostly scent of frost. I feel it through my furs and woolen dress, down to my skin… All of the sky looks like a burnt log in the morning hearth, cold, spent, ashen.” Those snippets are just from the first few pages! Solveig and her two siblings, Asa and Harald, have been sent by their father, the king, to a remote fjord for their own safety. As winter encroaches and their food dwindles, they wait for a summons home. When a ship finally arrives, it carries a small contingent of berserkers who have been sent to keep them safe throughout the winter. Alric, the skald, (story teller) has accompanied them. Solveig is the middle child and a girl. Asa, her older sister, is valued for her beauty, and Harald, her younger brother, because he is the heir. Plain Solveig is seen by herself and her father as having no value. Then Alric takes her on as an apprentice skald and Solveig starts to come into her own power and confidence. As winter advances Solveig’s ominous dream appears to be coming true. Terror seizes them as they face poison, sabotage and treachery. The royal family have no idea who they can trust. There are stories within stories inside this book. I loved the seamless integration of Norse Myth into the main body of the tale. I loved the adventure. I loved the characters. I liked that even the villains were complex characters. I loved the ruminations on the truth of stories. “A story is not a thing. A story is an act. It only exists in the brief moment of its telling… I begin to let myself believe my own story, that my words can summon shield-maidens. That my stories can shape the world…”
I wanted to like this book more than I did. The reviews were great - I was prepared to be wowed. Perhaps that was the problem. Nothing really lives up to such high expectations. In spite of all this, I might even reread this one.
Posted by Cheriee Weichel No comments: