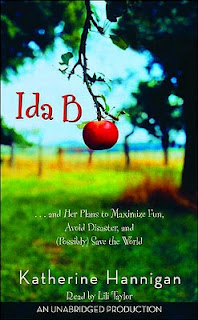 Ida B . . . and Her Plans to Maximize Fun, Avoid Disaster, and (Possibly) Save the World by Katherine Hannigan

If Ida B is any indicator, Katherine Hannigan is a writer to keep track of. You will want to read anything she writes once you have finished this one.

I confess that if a book can make me cry, I consider it a great book. In this regard, Ida B is a great read.

Ida B Applewood is a character you soon learn to love. She believes there is never enough time for fun. She has spunk, determination, and imagination. She’s smart in some ways and not so smart in others. I was completely caught up in her thoughts and emotions.

After a disastrous few weeks in kindergarten, Ida B has been home schooled. Her life on the land with her father and mother is idyllic. She talks to the trees and creek and they seem to talk back to her.

One day they tell her that a storm is brewing and there will be trouble ahead. Unfortunately the weekend storm is only the beginning of her problems. Her mother is diagnosed with cancer and they have to sell off part of their land to pay for the medical bills and Ida B has to start going to public school.

Upon hearing this, Ida B’s heart was transformed. It became a “sharp, black stone that was small enough to fit into the palm of (her) hand. It was so hard nobody could break it and so sharp it would hurt anybody who touched it.” In her anger and pain she is determined to hate everything but most especially school and her parents. In the end, she ends up doing something that she regrets.

Her teacher, Mrs. Washington, is the kind of teacher we all wish we could be. She perseveres until Ida B eventually talks to her and along with the love of her parents, begins to heal.

I would give this book to anyone who is a fan of Kate Dicamillo, Phoebe Stone, or Deborah Wiles.
Posted by Cheriee Weichel No comments:
Email ThisBlogThis!Share to TwitterShare to FacebookShare to Pinterest

Like my last review, this is another Red Cedar nominated book.

After reading this one, I desperately wanted to believe in faeries.

A community of them lives in the Oakenwyld, an ancient oak tree in the yard next to a human house. The Oakenwyld is in serious trouble. Life is harsh. Ages ago the faeries lost their magic and are being struck down by a disease called the silence. Faeries must bargain with each other for what they need. Friendship, caring and love seem to be unheard of. How this sundering came to be, or if there is anyway to undo it is a mystery.

Knife, the heroine, is a strong resourceful character. She isn’t afraid to take risks, get into trouble, and is smart enough figure out how to save herself. She is determined to discover what caused the loss of magic and find a way to change things. To do this she must peel away the layers of secrecy shrouding the community. Knife has no idea who to trust, but has supporters she is unaware of. She is used to breaking all kinds of faery rules, but not even she can imagine the consequences when she forms a friendship with a human male.

It is beautifully written. Anderson drew me completely into the world of the wyld and it’s inhabitants. Perhaps because I grew up in a home with someone who used a wheel chair, I felt deep empathy for Paul (the human) and his family, but I think it was as much because of the way Anderson crafted the story and demonstrated the tensions in the relationships.

I also liked it because while it is the first in the faery rebel series, it is completely satisfying all by itself.

There is an element of love story in this book, but it is also a book full of adventure, suspense and mystery. I don’t know who wouldn’t enjoy it.
Posted by Cheriee Weichel No comments:
Email ThisBlogThis!Share to TwitterShare to FacebookShare to Pinterest

The Prince Of Neither Here Nor There (Red Cedar Book) 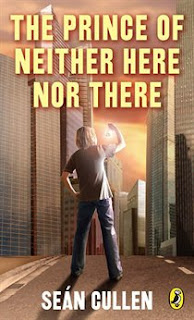 The Prince Of Neither Here Nor There
By Seán Cullen

This is the first book in the The Chronicles of the Misplaced Prince. Fans of the Hamish X series will be happy to find that the same narrator is recounting this tale of an exceptionally nerdy 14 year old boy at a school for nerds.

Brendan is a clumsy teenager who hangs around with his geeky friends and a much cooler girl named Kim. He thinks he is just a normal a kid whose worst problem is dealing with the school bully.

Then strange things start to happen.

First, Kim and the new substitute teacher seem to be more than they appear to be. At a concert, he gets so mesmerized by the music that his father and Kim have to remove before he jumps on the stage to start dancing. He has what he thinks are strange dreams and the next day begins to hear voices and ends up talking to animals. Of course he suspects he is going crazy.

Eventually he discovers that he is a Faerie who was disguised as a human at birth and hidden from the Faerie world. I did not spell that wrong. As the narrator explains, “This is a story about Faeries. Not Fairies. There’s a big difference and it isn’t just that one is spelled with an “e.” Fairies are ineffectual little things that flit about in children’s stories....” Brendan soon discovers that while these Faeries are magical, they are also dangerous and deadly. It doesn't take long before Brendan is caught up in a battle between good and evil that involves chases, battles, and all kinds of strange creatures.

Readers who love humor, fantasy and action packed adventure will enjoy this book. I can’t wait to get my hands on Book Two: The Prince of Two Tribes.

Deep Down Popular & The Romeo And Juliet Code

Phoebe Stone can write. I mean really write. Sometimes I have to shut the book, close my eyes, and savor a line or two. I loved Deep Down Popular and finally managed to find time reread it, as well as The Romeo and Juliet Code this summer.


DEEP DOWN POPULAR by Phoebe Stone 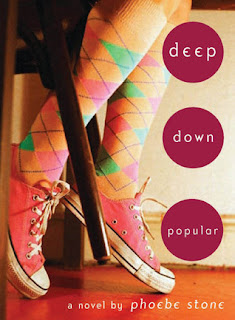 I just finished rereading this one. It feels as powerful and true as it did the last time. It is a book about friendship, first love, and ultimately, about coming to terms with who you are.

It is the story of friendship between Jessie Lou Ferguson, Conrad Parker Smith, who she has adored since primary school, and Quentin Duster, a fourth grader.

I loved Jessie Lou. She is in grade 6, a tomboy who is anxious about fitting in and having friends, feels like an odd ball, and is not sure she likes herself.

Of course, just like Jessie Lou, I loved Conrad! He is smart, kind, and wise beyond his years. In Jessie's words, “In his heart he knows first isn’t touching a door knob, or getting to sit in the front row seat by the window, or making it up to the road before everybody else. First is something deep down inside you that you know and feel and nobody can take away from you” p 121.

Quentin Duster can be a bit of a pest, but the thing about him is that he grows on you (in spite of having some seriously overdue library books!)

Jessie and her older sister, Melinda, seem to be very different, but then Melinda fails to win a beauty pageant. In the end it doesn't really matter that they “were only there to make the winner feel more important.” p 181. After this Jessie Lou realizes that she and Melinda have much more in common than she thought and they begin to connect with each other.

By the end of the book I cared deeply about all the characters and much as I wonder what will happen to them as they grow up, I know in my heart that Quentin, Conrad, and Jessie Lou will remain deep down friends forever. 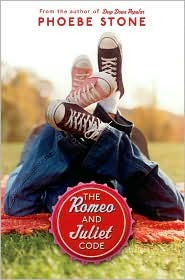 THE ROMEO AND JULIET CODE by Phoebe Stone

Set at the beginning of the Second World War, Felicity, age 11 travels with her parents, Winnie and Danny, from England to a village on the coast of Maine. After a tense and awkward interlude, Felicity is left with family she didn’t know existed, while her parents return to England.

At first the house and its inhabitants seem shrouded in secrets and intrigue. Felicity warily negotiates her interactions with this new family; The Gram, Uncle Gideon, Aunt Miami, and the mysterious Captain Derek.

Over time Flissy (as she is nicknamed) comes to settle into her new life in America. She is a gift to them and helps them recover from their past hurts and insecurities.

Letters arrive from Danny addressed to Uncle Gideon. After much sleuthing, she and Derek crack the secret code and unravel the mystery surrounding them.

As the family secrets are revealed, Felicity finds that she finally has a home and place where she belongs.

I expected this book to be more like Deep Down Popular and there are some common themes – friendship, family, and first love are integral. Once I got over that it was different, I found that I enjoyed learning about history as I read this book. In it’s own way, it is another great read!