The Year the Swallows Came Early by Kathryn Fitzmaurice 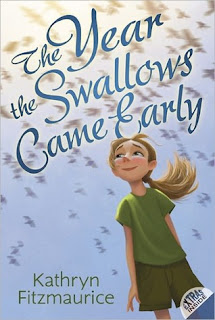 There is absolutely nothing sweeter than a simple tale, well told. The Year the Swallows Came Early by Kathryn Fitzmaurice is one of them.
Groovy (Eleanor) Robinson has big dreams. She loves to cook and plans to go to school to become a famous professional chef. At age 11, she is already on her way.
In the mean time she lives with her mother and her father “in a perfect stucco house, just off the sparkly pacific” in San Juan Capistrano where the swallows migrate to every year. One Saturday morning while she and her daddy are out walking, the local policeman stops them and takes him off to jail.
Groovy is beside herself with disbelief and certain that this has been a terrible mistake. To add to her confusion and distress, her mother confesses to having called the police herself. It turns out that her father has indeed done a terrible thing. His actions have robbed her of her dreams.

When the reality of it finally takes hold:

“The feelings started real slow, like tiny raindrops that can’t make up their minds if they’re going to pour from the clouds, or pass through with the breeze.
But then the more I looked at his handwriting in the bank book----the zero scratched in black pen---the faster those drops fell, until it felt like I was sitting in a big, blowing thunderstorm. And just like those storms that can be so sneaky, I didn’t see it coming. And before I knew it, I felt soaking wet, with nowhere to go. So I sat there for a long time, until I shivered from all the cold swirling around me.
And then it happened. It started coming up into my toes, staying there for a minute, waiting to see if I would push it away.
But I didn’t.
So it crept up past my knees, and then into my stomach, finally finding its way to my heart. Where it stopped and settled in deep.
And here’s what I thought: I wished I’d never found what was in that box because feeling mad at Daddy was a million times worse than feeling sad.”(pp 167-168)

Groovy changes her name to Eleanor, and sinks deeply into paralyzing feelings of grief, anger and emptiness.
Frankie, her best friend, has his own cross to bear. Two years ago his mother left him with his stepbrother to go away for a week. She hasn’t returned. Frankie won’t read her letters or postcards. He is filled with such anguish that he is making himself ill.

This is a beautiful book – I picked it up and couldn’t put it down till I finished it. It is a treasure. Tiny gold and silver nuggets of words you find yourself rereading just to savor them. There is beauty in the descriptions. Kathryn Fitzmaurice, takes the reader into a hypersensitive awareness of atmosphere - physical, emotional, and spiritual. Enthralled by her writing we live vicariously through her very real characters as they experience loss and sadness, anger and despair, and just maybe, joy and peace.
Each spring the swallows return to nest bringing awe and wonder with them. This book brings its own kind of awe and wonder as it wends it way into our hearts with its story of friendship, family, and forgiveness.

I would recommend this book to fans of the Lucky books by Susan Patron, Katherine Hannigan’s Ida B, Deborah Wiles Each Little Bird That Sings or Love, Ruby Lavender, and Phoebe Stone’s, Deep Down Popular.