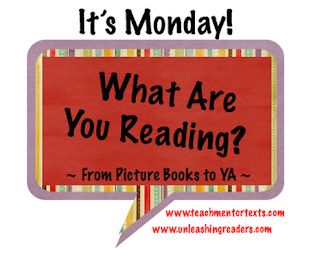 It's Monday again, my favourite day of the week. Time to check in with hosts Jen From Mentor Texts and Kellee andRickie from Unleashing Readers, to find out what bloggers around the world are reading this week.

I missed posting last week because my life is kind of out of control occupied. My son is getting married on the labour day weekend in the Southern Okanagan Valley here in BC. Since he and his sweetheart are living and working in Korea this summer, I have been left to deal with the details of pulling it together. It's a heck of a lot of work! On top of all this we are in the middle of renovations of our house there. Since we are doing much of it ourselves, it means we have been crazy busy. I was hoping to get a star wedding ring quilt done for them, but since I've barely gotten the paper pieces cut out, I've conceded it might be done by their first anniversary. On top of all this, I took my mother on a road trip for four days so she could meet up with friends and family. If it wasn't for audiobooks, I wouldn't have gotten any reading in at all!

I did managed to scrape out time to put together a digital list of books students at our school think you should read over the summer. I blogged about The Red Bicycle by Jude Isabella. I've also been working on transforming a huge paper poster illustrating our school philosophy into digital format. I'm spending hours steeped in the world of Photoshop.

Here is what I have accomplished in my reading life in these past two weeks.

The Red Bicycle by Jude Isabella and Simone Shin (illustrator)
I enjoyed this story that reveals the different incarnations of a red bicycle. It makes a difference in the lives of all its owners from Leo in America, who first purchased it, to Alisetta in Burkina Faso who used it to improve her family's standard of living. Then it was transformed into an ambulance and used to help many different citizens in that country.


Unfortunately I had to return this book to the library when I was about 2/3 done as I was unable to renew it. I loved reading the letters from the writer's older selves to their younger ones. Like the goodreads write up says, I learned things about some of my favourite authors I never expected, and I also learned about myself. I'm left thinking how wonderful it would be to get our students to write a letter to their older selves.

I'm not generally a fan of violent books and I don't often read an entire series, but I'm just hooked on Derek Landy's Skulduggery Pleasant collection. They are fast paced with plenty of action and fascinating characters that mature and evolve as the series progresses.

Dark Days (Skulduggery Pleasant 4) by Derek Landy
At the end of the last book, Skulduggery was sucked through a portal into the land of the faceless ones. In this book Valkyrie sets out to save him. It means fraternizing with vampires and zombies and delving into the magic of the necromancers. An old enemy of Skulduggery is released from prison and sets out to destroy him and the Irish Sanctuary, the ruling center for magic in Ireland.

Mortal Coil (Skulduggery Pleasant 5) by Derek Landy
In Dark Days, Valkyrie learned that her true name is Darquesse, a women who is foretold to bring about the end of human life on earth. The leader of the necromancers causes the release of Remnants, psychopathic spirits who possess humans. These spirits think that Valkrie, as Darquesse, will become their leader. What I liked most about these last two books is that Valkyrie is growing up and becoming more independent of Skulduggery.

Unfortunately, our library has no more of this series available as audiobooks.

The Martian by Andy Weir
If someone told me how much science there was in this book, I might have doubted it could be so scintillating. But it grabbed me by the throat and kept me coming back for more. It's the story of an astronaut who gets left behind on a mission to Mars when his companions are led to believe that he died in a freak accident. He manages to survive through his ingenuity and determination. I listened to it while painting the basement of our house. It made this boring job enjoyable. Unfortunately, this is a book for older readers. I won't be getting it for our library, but I definitely encourage others to read it.

The Railway Children by E Nesbit narrated by Renee Raudman
My mother and I listened to this book on our road trip. We were both enchanted by this classic tale of a family with three children whose life changes drastically when the father mysteriously goes away. It is a charming story with delightful characters. It's a bit dated, but still wonderful.

Masterminds by Gordon Korman
This is the first print book I've read in ages, well in over a week anyway. I sat down with it and finished it in one setting. I loved it! I'm accustomed to Korman grabbing my attention through plot based stories. What I enjoyed about this one is the development of the different characters as well as the story line. It's the story of a group of children who live in an ideal town. They discover that who they are, and what the town is really up to, are not at all what they have been taught. I can't wait to get a copy for our library. This is the first in a new series. I might even read more of them!

Currently I'm listening to The Unwanteds by Lisa McMann. It is the first in a series that many of my readers are infatuated with. I'm not crazy about it, but it is entertaining me. I'm in the middle of Cynthia Lord's A Handful Of Stars and expect to be finished with it by tomorrow.

Up next I've got a couple of library books: The Great Good Summer and More Happy Than Not that I need to get finished so I can return them before we head out of the city for a week long camping trip and more renovations on our house in Oliver. I've started Shadow Scale by Rachel Harman, but I'm saving it to read when I am in the magical wilderness.