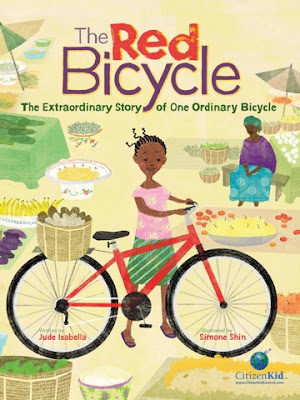 This is the story of a bike with many lives. 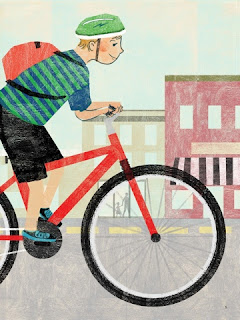 Leo, it's first owner, worked hard for two years to save up enough money to purchase Big Red. He loved his bike and rode it back and forth to school and everywhere he went. Eventually though, as is the way of things, he grew too big for it. He wanted Big Red to go to someone who would love the bike as much as he did, so he decided to donate it to an organization that sends bikes to a country that needs them. After sprucing Big Red up, Leo rode it to the shipping container where he helped pack up the bikes to ready them for travel. 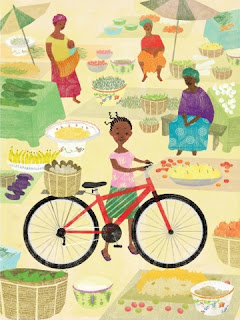 Big Red traveled across the Atlantic Ocean to Ghana. There the container it was in was loaded onto a truck and continued its journey to the city of Koudougou in the country of Burkina Faso. Big Red and his next owners, Alisetta and her grandmother, Awa Sawagogo, traveled in a bush taxi to their village. After Alisetta learned to ride the bike, she used it to chase the birds away from their sorghum crop. Because of Big Red, the family harvested more sorghum. Alisetta used the bike to take products to village markets to sell. This led to a better quality of life for all of them. Soon they had enough money to send Alisetta's two younger siblings to school. Eventually they saved enough cash to purchase another bike, but while Alisetta was away, an out of control pig  damaged Big Red. 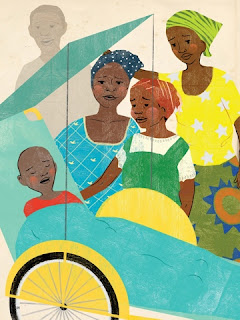 As there was no money to repair it, Big Red went to the local medical clinic. Boukary, their mechanic, fixed it and attached a small trailer that held a stretcher. Big Red was transformed into an ambulance and ready to go to work again. Haridata, its next rider rode it to smaller villages to collect patients and deliver them to the local hospital. She traveled a half hour to collect her first patient, a young boy with a broken leg, but at other times she journeyed much farther. Big Red became famous and was known as Le Grand Rouge by the children in the surrounding areas.

This is a picture book for older readers, as there is a lot of text on the pages, but each page also has a sentence in larger font for younger readers. I just wish this text was easier to read as in my Netgalley copy, it blends into the background.

As you can see from the above images, Simone Shin's illustrations are works of art. They bring an immediacy to the story, helping readers connect more deeply with the individuals and their situations. She also makes us love Big Red, who is perhaps, the most important character in the book.

This is one of those books that makes me wish I was teaching in a classroom again. It has so much potential. The section at the back gives readers more information about organizations that donate used bikes. There are even notes for teachers with advice for how to use the book. We have a few teachers at our school who focus on social justice issues. I know they will love this book!