Hi Everyone, and welcome to Poetry Friday. I'm excited and nervous to be hosting today for my first time! Leave your links below and enjoy a special day celebrating poetry. 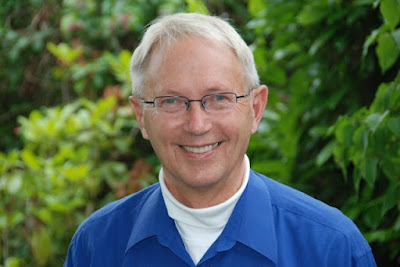 Now that I'm finished sharing first drafts of my memoir, I’m hoping to highlight Vancouver children's poets on my blog. I want to brag! We have a lot of talent here north of the 49th parallel. I’m beginning with Robert (Bob) Heidbreder. Not only is he one of my favourite local authors, he’s also one of my favourite children’s poets. Reading anything by Bob saturates me with sunshine. His language is all hippity hoppity bibity bopity. It fills my body with rhythm and makes me want to dance.

Bob is kind, generous, gracious, funny and smart. He came by for lunch the other day and I interviewed him about his life and work. I wish I was smarter and had recorded our time together so I could quote him accurately. I also forgot to get my husband to take a picture. Next time I interview someone, I’m recording it and adding, get a photograph, to the list. I had a lot of questions. I should add that Bob is very patient.

Bob Heidbreder was born in 1947 in Quincy, Illinois. He didn’t take to reading till he was in grade six, but adored the “bounce of poetry.” His earliest poetic influences were memorizable poetry like street rhymes, Mother Goose, skipping and playground poems like Eenie Meenie Miny Moe. He nearly drove his sister crazy by reciting 'Fuzzy wuzzy was a bear' until she screamed. Bob's first book, Don’t Eat Spiders is based on these kinds of poems. Eenie Meenie Manitoba is another.

He began writing early and had poetry published in his school newspapers. In high school he discovered W.B. Yeats and Robert Service. Present day favourite poets include: Yeats, Wallace Stevens, and Elizabeth Bishop, especially this poem,


One Art
by Elizabeth Bishop

The art of losing isn’t hard to master;
so many things seem filled with the intent

to be lost that their loss is no disaster.

Lose something every day. Accept the fluster
of lost door keys, the hour badly spent.
The art of losing isn’t hard to master.

In secondary school Bob embraced the Latin language and then went on to study Greek and Latin at Grinnell College in Grinnell Iowa. In 1970 he immigrated to Vancouver, Canada to do graduate work in the classics department at the University of BC. A search for a Latin Dictionary introduced him to Jane. They fell in love, got married, and lucky for us, Bob never left Vancouver.

Given his classical background, I couldn’t help but ask how he came to teaching Grade One.
His response: I was tired of academia.

Bob spent thirty years with little ones before retirement. These youngsters brought him back to the rollicking poetry he loved in his youth. At first he only wrote poems that entertained, engaged and educated his students. Then Jane encouraged him to try to get his work published, and the rest is history. He’s been a beloved Canadian poet ever since.

He has won all kinds of accolades, awards, and honours; including The Prime Minister’s Award for Teaching Excellence 2002-2003. His classroom work is highlighted in Mr. H and his Unruly Puppets, a documentary directed and produced by our mutual friend, Annie O'Donoghue. (My husband was the cinematographer.)
In Mr H's classroom, learning was challenging and fun. "A cast of over 50 puppets, led by the wise wizard Alphaterwa and the unruly Stanley C. Crow, transformed the Grade One curriculum into a year-long interactive drama.” You can watch that video below. I discovered it online recently and will have to report it to the creators. It might not be available for long. I encourage you to take 30 minutes to watch it and be inspired.

Here are some of his writing habits:
For him, the easiest thing about writing is “Getting ideas.” The most difficult thing is “Working through ideas to the end.” He has a 'sleeping drawer' where he puts manuscripts that are not coming together. They might languish there for years before he gets back to them.

The best advice he's ever gotten is to "Keep at it. Don’t give up." His advice to new writers includes the same advice, with the addition of, "Avoid adjectives. Discover your own voice. Write for yourself." As an afterward, Bob claimed that before you are published, you write for yourself. Afterwards you tend to write to get published.

On Publishing in Canada:

Bob enjoys the stimulation of working with all his editors. A favourite was Sheila Barry, a superhero in Canadian Children’s Literature who is much loved and missed in the Canadian publishing community. He figures it's good that writers don’t get much interaction with illustrators. He wouldn’t expect an illustrator to ask him to change a few words, so doesn’t expect to have a say in how illustrators interpret his books. Only once did he assert that he didn’t think an illustration was in the best interest of a book. Luckily the editor agreed.

In the last few decades we have lost many independent Canadian publishers in general and of children’s books in particular. Kid’s Can Press, originally a local publisher of children’s literature, has now become a multinational corporation. More and more often, Canadian authors are asked to remove aspects of their work that contain Canadian references because they don’t sell in America.

To date Bob has published eighteen books. Some have been rhyming picture books and others are collections of poetry. His books have been shortlisted for, and won, numerous awards here in Canada! 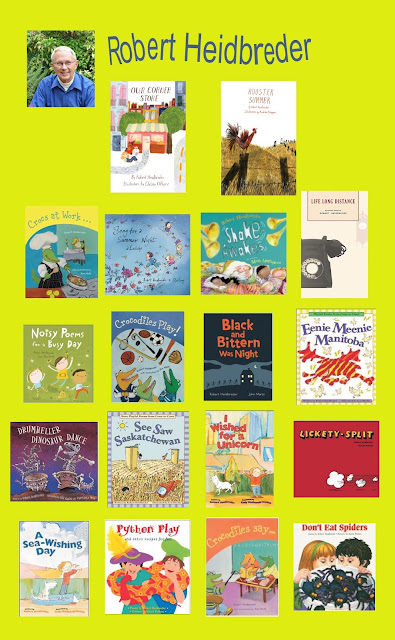 My favourite is Drumheller Dinosaur Dance. This is one of my go to books when I am substitute teaching in primary grades. Students unfailingly love it. Told in rhyming, rollicking poetry full of onomatopoeia, it shares the shenanigans of dinosaurs late at night in a special spot near Drumheller Alberta. The typography dances and sings all over the page in unison with Bill Slavin's and Esperanca Melo's raucous artwork! Every student I've introduced this too has loved to shout out the chorus of, BOOMITY-BOOM RATTELY-CLACK THUMPITY-THUMP WICKETY-WACK. Here it is in the following video.

I also adore Song for a Summer Night: A Lullaby. Qin Leng's illustrations are the perfect match to Bob's lyrical poetry.

Here are the first three stanzas of the poem:

Day’s left the sage.
Night’s in the wings
The summer air sings
What a summer night brings.

Draw back the curtains.
The still park’s below.
The children at windows
All wait for the show.

Rooster Summer, his most recent book, is a memoir in verse about his summer holidays with his grandparents on their farm. It's full of magic - the kind that can only be experienced by children in a place full of wonderful animals and doting adults. There's Rexter, the talking rooster; Seed-Sack, the mule who thinks he's a horse; Ginger Tea, the dog; and Tuftin, the cat. Many of Robert's descriptions, like this one, "inside is a bundle of purrs" make me want to swoon. Rooster Summer is a book that will make you nostalgic for a time and summer the likes of which you might never have experienced. Madeline Kloepper's vintage style art is the perfect accompaniment to the poems in the book.

Bob is very busy! Our Corner Store, a companion memoir in verse, is in production with Groundwood. The release date is set for April 1, 2020.
He's got a couple of projects in the writing stage and three other books in production:

I leave you with a few other questions and answers.

Favourite color: “Yellow. It gives me a bright feeling, like wearing a piece of the sun.”

Favourite vacation spot: Gabriola Island where he and his wife have a cabin and chunk of land

Favourite book: “The Good Soldier because of the unreliable narrator”

Favourite word: growing up, it was Mississippi, but while he was teaching, it was supercalifragilisticexpialidocious.

Favourite music: Jazz. These days Bob’s taking a course, What Makes it Jazz: at the downtown campus of Simon Fraser University.

If you could be someone else, who would you be?
"I'm happy being myself," but wouldn’t mind being a high powered stage actor for a day.

If you had all the world’s children in one room, what would you tell them?
"Let’s see what we can laugh at. Laughter gives us power."

Before we parted, Bob reflected upon the idea that a moment is a poem. Narrative is the accumulation of these moments put together. He also left me with his three R’s of writing poetry:
I decided to play with that and here's what I ended up with:

Today my lunch ate me
I was surprised as I can be
Inside it's tummy I tickled away
Till it spit me out shouting, Go Away!

What can you come up with?


I would like to give a special shoutout to Michelle Barnes who has been an unwitting mentor and inspiration to me for the brilliant questions she asks authors!


This is my first time with a linkz. If it doesn't work, please just add your link in the comments section and I will post them here during the day.


You are invited to the Inlinkz link party!
Click here to enter