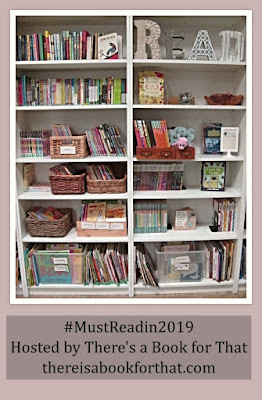 Carrie Gelson at There's a Book for That, hosts #MustRead. I have been joining in for the past couple of years. If you have a "want to read" list on Goodreads (or somewhere else) that goes on forever, then you might be interested in joining. All you have to do is choose any number of specific books on that list, and do your best to read them all.
A few times a year Carrie reminds us that it's time to be accountable and post an update of how we are doing. It's a good thing for me since knowing these times are coming up reminds me to focus regularly on reading from my lists. You can see the list of participants on Carrie's Blog here.

This year I created a number of different reading goals from my never ending and always expanding want to read list on Goodreads. My goals were to read at least a specific number of books from different lists including some general fiction, some nonfiction, some from Canadian Indigenous authors, and finally, to read Canadian. You can see my original goals here.

I've done well so far except that I need to read more Indigenous literature. You might also notice that there is some crossover here. I haven't decided yet if it's acceptable.

I have read 9 of the books on my list and have one on the go!

Hearts Unbroken is the kind of YA novel I adore. Louise Wolfe, an urban Muscogee (Creek) girl, is in her last year of high school. She's a journalist on the school newspaper and getting into a serious romantic relationship. Then a group calling themselves Parents Against Revisionist Theater, get their knickers in a knot when black and indigenous students get starring roles in the school production of The Wizard of Oz. The school newspaper covers it all.
Cynthia Leitich Smith brings a lot to our attention here and I appreciate it. But ultimately this is a solid coming of age novel, and that's what I love most about it.

This book tells the stories, in alternating chapters, of the descendants of two African women. One of them married a white man and lived a life of luxury. The other was sold into slavery in the United States. It isn’t an easy read, because some of these stories are brutal and keeping track of all the different characters is challenging. I learned a lot about the history of Ghana at the same time as learning more about the history of slavery and segregation in the United States.

Moon of the Crusted Snow by Waubgeshig Rice

Just at the start of winter, a Northern Anishinaabe village loses cell service, TV, Internet and electricity. It’s not an uncommon occurrence so they figure it will just be a while and everything will be back to normal. When a couple of their 19 year old sons make their way home from college on a snowmobile, they and we soon discover it’s a more global shutdown. It seems that the apocalypse has begun. Then a white man, Justin Scott, arrives after following the teens tracks in the snow. The community leaders let him in, but have serious concerns about him that appear to be well founded when another group of white refugees arrives. Although it is never mentioned in the book, I couldn't help but see Justin Scott as a Windigo.

I loved this book about Else, a precocious, almost eight year old and her obstreperous grandmother. Their relationship plays out within the synthesis of an allegorical fairytale tale world, the Land-of-Almost-Awake, and their practical day to day reality. They live in a house full of flats. When the grandmother dies, Else discovers that the stories of the Land-of-Almost-Awake are connected to the other tenants in the building.

The Poet X by Elizabeth Acevedo

This was intense, but impossible to let go of. The writing is just brilliant.
Writing poetry is what keeps X sane. She shares a room with her male twin brother in a fundamentally religious family. Her mother is extremely strict with her, at the same time as she is lenient with her brother. Their father seems to be almost absent. X is caught up in questioning her faith, falling in love for the first time, fending off unwanted sexual advances by boys and grown men, and writing poetry as if her life depended on it. Maybe it does. Thankfully there are adults in her life who are there for her, including her teacher, Ms. Galiano, and surprisingly enough, their local priest.

This book took me way out of my comfort zone. It's told in two parts. One part is the story of a girl name Sadie, who is searching for her sister's murderer. The other part is the transcription of a radio show about the two girls and what happened to them. It's a dark thriller that brings awareness of child sex abuse and highlights why so many girls go missing.

There There by Tommy Orange

I'm not sure that listening to this book is the best way to go, although I was riveted throughout. Perhaps it was that I took to long to finish it, but there are a lot of characters to keep track of, and I sometimes lost track of who was who. That said, I did love the individual stories. They were what kept me coming back. I was terrified of the end, but when I finally got there, I was mesmerized by the beauty of the writing.

After his older brother's death, Peter Lee's mother sinks into a deep depression. Baseball was something the family celebrated together, so he concocts a plan to play baseball as a way of bringing her back to them. Whether it worked or not we don't find out in this book, but it does heal the schism between Peter and his father that was growing even before the tragedy.

I was infatuated with this book upon reading the first page. It called upon me to remember all I read about fairies long ago. I adored Wicked Nix and his antics. At the end I wanted to crawl back into Lena Coakley's world. Wicked Nix is a fairy who was left behind after the last midsummer eve revelry. With the help of Mr. Green, the spirit of the forest, Nix has managed to survive, but now a people has trespassed into their woods. Nix is certain that the queen won't be happy with this turn of events and tries to scare the intruder away.


I have read 5 of these and have one in progress.

This is one of those books that lifts you up and makes you happy to be alive. It's as beautiful on the inside as the cover shows. That pink especially made my heart sing.

The book is composed of photographs, reproductions, text and even a graphic novel component. It was written to accompany an exhibition at the Art Gallery Ontario. I appreciated learning how societal factors outside his quiet community influenced Colville's work. It was also fascinating to see how his work has influenced other artists from different mediums. Although I already knew how meticulous and even mathematical Colville was, I was surprised at how many studies he completed before finally finishing a painting.
The writing is nearly as stunning as the paintings themselves.

This nonfiction graphic text brought tears to my eyes numerous times. It's a hard read emotionally, but worth it. The book tells many different individual and family stories. All of these people fled Syria fearing for their lives. Their journeys are harrowing and heartbreaking.
The constructed chaos of the book's formatting creates an instability that leaves the reader feeling out of control and not sure what is going to happen next. It all ended up making too much sense to me. It's brilliant. I hope it's as close as I ever get to being a refugee.

Reckless Daughter: A Portrait of Joni Mitchell by David Yaffe

I was excited to see this biography. I enjoyed Xe Sands’ narration and appreciated learning the background that led to the different albums. But sometimes you don’t want to know exactly everything about your idols. You want them to maintain their mythic status. You don’t want to learn about their pettiness and flaws. You don’t want them to be human.
I would lying if I told you I loved this book. I almost abandoned it at one point, but didn’t and am glad I finished it. It turns out that it’s ok to see that people you admire are just human after all. It made me appreciate Mitchell’s gift even more.

There were parts of this book that fascinated me. At other times I questioned Harari's analysis, especially regarding early indigenous migration in the Americas. I enjoyed Derek Perkins narration, although I did read parts of the book.

This book takes us into the joy of spending time with extended family. It's centred around a Grandpa when his granddaughters come for a visit. His farm is full of adventures to be had - from playing house in the root cellar to teasing a poor pig.

Keeper'n Me by Richard Wagamese

This is the story of a young man who was taken from his home and family during the 'sixties scoop.' Garnet Raven was only three when he was taken from his home on an Ojibway Indian reserve. He spent time in numerous foster homes before ending up living on the streets. Eventually he ended up in prison. It was there that his lost family contacted him. Upon his release he returned to the reserve and with the help of an elder, Keeper, began to understand his identity as Anishinabe. The book is poignant, spiritual, and at times, screamingly hilarious.

Speaking Our Truth: A Journey of Reconciliation by Monique Gray Smith

This is an important read for all Canadians, not just the target audience of students. The book will help everyone understand our history and responsibility to ensure that our relationship with indigenous people is one of respect as we go forward. While I thought I knew a lot about residential schools, I was still suprised by information in this book. Check out my blog post here if you want to know more about this book.

This essential read tells the story of two indigenous girls growing up in a city. The two best friends carry huge weights on their shoulders as they navigate their way through an urban world full of danger. The artwork is just spectacular! Check out my blog post here to see samples of it.

Una Huna: What Is This? by Susan Aglukark & Danny Christopher & Amanda Sandland (Illustrators)

Through the perspective of a young girl, Okpik, we become acquainted with a northern community learning about the ways of the white people. Even though the pages are text heavy, young readers will connect with Okpik who has a puppy she is trying to come up with a name for.

I have already read so many books in this category, that all I'm going to do is list them.

Wicked Nix by Lena Coakley
Missing Mike by Shari Green,
Whimsy's Heavy Things by Julie Kraulis,
Claire's Race by Nancy Wilcox Richards,
Grandpa's Girls by Nicola I. Campbell,
Noni Speaks Up by Heather Hartt-Sussman
Colville by Andrew Hunter,
Fake Blood by Whitney Gardner,
What Happens Next by Susan Hughes,
Mine. Yours. by Marsha Diane Arnold
Where Oliver Fits by Cale Atkinson,
I Am Small by Qin Leng,
Escape from Syria by Samya Kullab,
How to Grow a Friend by Sara Gillingham
Una Huna: What Is This? by Susan Aglukark
Sparks! by Ian Boothby
Bloom: A Story of Fashion Designer Elsa Schiaparelli by Kyo Maclear
Moon of the Crusted Snow by Waubgeshig Rice
The Brutal Telling (Chief Inspector Armand Gamache, #5) by Louise Penny
Mary, Who Wrote Frankenstein by Linda Bailey
Sadie by Courtney Summers
Off & Away by Cale Atkinson
Posted by Cheriee Weichel