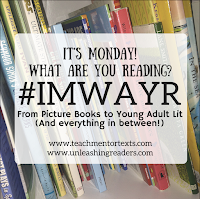 It's Monday and looks to be another one of those crazy end of the school year kind of weeks. I'm happy to be here with all of you sharing and celebrating reading. Thank you so much Jen at Mentor Texts and Kellee and Ricki at Unleashing Readers for hosting #IMWAYR. My reading life is much richer because of you.

I haven't accomplished as much reading in the past week as I usually do. There are all kinds of reasons for this.

Part of it is that I've been grieving. Grieving for my mother and a cousin who just died. Grieving all those aspects of teaching I'm going to miss when I retire at the end of this year. Grieving makes concentrating a challenge.

Part of it is also that I've just been really busy. Busy with a huge book club celebration last Wednesday. Busy with trying to finish up and publish stories written by the six and seven year olds I've been working with this year. It's taken much more time than I anticipated to get those finished. Now I'm having difficulty getting them published to the school website since some of the documents are too large. It's a huge rigmarole as I work to get them connected to my site here.

The Little Gardener by Emily Hughes

I've read this book a couple of times now, and it just gets better with each reread. There is more time to relish the gorgeous illustrations and to get lost in the minute detail. There's more time  savor all the nuances and layers of meaning in the text.

There is a lot I really liked about this book, but there are some things that are unsettling as well. I love McKenzie's illustrations and if it were not for some gendered issues, I might well love it.
Here are my problems with this book.
First, the two girls want nothing to do with a boy whose activities interrupt their play. We don't know the background behind their relationship, but the boy comes across as a bit of an out of control buffoon at first.
Second, when Marmalade the cat gets into trouble, the girls try different things to save her, but it takes the boy to come up with a solution.
Third, when the children finally start to play together, they have all adopted the manner of play of the boy.
I think this book is trying to make a statement about being more accepting towards others who are different, and I appreciate that. It's just that these gender issues distress me.

The Angry Little Puffin by Timothy Young
What a fun way to learn! A lone puffin is very aggravated that people continuously mistake him for a penguin. So he sets out to teach us the difference. I discovered all kinds of things about puffins in this book. Probably my favorite page is the one explaining that they are polar opposites, but there are many others that I adore. While this one is loaded with information, it isn't strictly nonfiction as it is told from the point of view of the puffin. 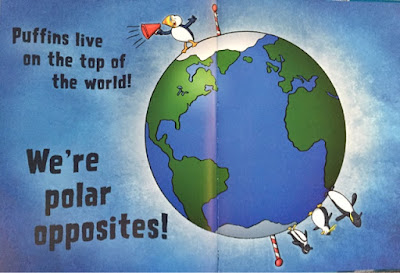 These Shallow Graves by Jennifer Donnelly

I waffled about whether to give this one 3 or 4 stars since I think it is somewhere in the middle. Ultimately though, it's closer to a 4.
I was captivated by Jo Montfort from the start. She is a strong character with big dreams at a time when women of her class were expected to be proper naive young women and marry well. Jo is naive, but she is also headstrong and stubborn. I was completely gripped by the last part of the story as well when her father's murderer is revealed and Jo barely escapes with her life. My problem is that the middle lagged for me in places. I figured out who murdered her father somewhere in the middle and it took too long to get to the final reveal.
Throughout I really appreciated the historical details that combine to create a portrait of New York City and life in America in the 1890s for women.

I'm listening to The Unlikely Hero of Room 13B by Teresa Toten narrated by Johnathon McClain. I'm reading I'll Be There by Holly Goldberg Sloan and a netgalley title, Gertie's Leap to Greatness by Kate Beasley & Jillian Tamaki (Illustrator) I am loving all of them!

I'm hoping to read more of the new picture books that have been arriving. Then I have to get to The Boy Who Knew Everything by Victoria Foster and Feathered by Deborah Kerbel.