The clock is ticking. Three days left with children. One admin day including my last year end breakfast. Then I'm off to the mountains for a week or so before coming back and completing inventory. 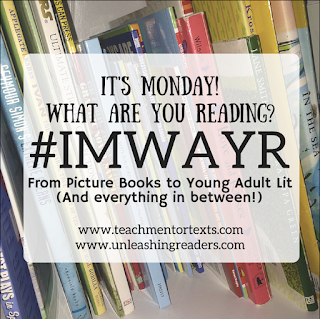 I always remember that June is a hard month, but it isn't until I am in the thick of it that I remember just how exhausting it is. In an ordinary month of the year, one bad night's sleep is doable, but these days, it nearly kills me. My brain already has the consistency of swiss cheese. My short term memory is shot, and my long term one isn't functioning well either. I can't carry a thought from one room to another.

At the end of the day I collapse into my chair in front of the TV and knit until it's time for bed. Mostly, if it were not for audiobooks and nonfiction picture books, my reading life would be a disaster. Actually, I'm impressed that I managed to get in the reading that I did. Just don't ask me about my house ok?


I'm not quite sure about this book. Lawson is screamingly funny. Yet there is a manic quality to some of this that exhausted me. She is also profoundly serious. It is that combination that kept me reading. It worked perfectly for me because I listened to it in smaller chunks as I travelled back and forth to work or ran errands. I'm not sure I could have managed it for a longer period of time. But then, in my present vacant brain state, I'm not sure I could have sustained anything for much longer.

The Boy Who Knew Everything by Victoria Forester

It took me a while to finish this book. I learned from Forester's The Girl Who Could Fly that no matter what was going on, this book was going to be worth the read, and it most certainly was. It picks up where the first book ended. Piper, Conrad and the rest of the children with special abilities are ensconced at the McCloud's farm. Eventually they set off on their own except for Piper and Conrad.
At first it is a slow thoughtful read that focused considerably on Conrad's fractured relationship with his father, who just happens to be President of the United States.
Eventually it filled with action and plenty of plot twists and turns.
Something evil is afoot as disaster after disaster strikes. Conrad's father seems to be in the middle of it. The crew of special children reunite and Conrad trains them to work together to save the world.  Not only do they have to go on numerous rescue missions, they need to find out who and what is behind the trouble before it is too late. In the process, Piper and Conrad end up in Xanthia, a land that is supposed to be a safe place for individuals with special abilities.
The thing is, is it?

This is a good solid story filled with hilarity, adventure and magical creatures. It's the first in the series starring Ben Silverstein, Pearl Petal, and a veterinarian who advertises herself as a worm doctor, but in reality, treats creators from the imaginary, magical world. I listened to this, but will find a hard copy to look at the illustrations. Younger readers will love this series I think.

Sounds of the Wild: Bugs by Maurice Pledger

I have not read this book cover to cover. It was probably a ridiculous purchase for a four-year-old girl. But that four year old girl is crazy about bugs and dinosaurs. When I discovered it in the store I had to get it for her birthday. The illustrations are gorgeous. They are loaded with detail. As each page is turned, the images pop out of the page and are accompanied by the sounds the animals make in that environment. On the following page is a smaller image wherein each creature is numbered. The text on this page pairs up the bug with its name and information about it. This isn't a book I would get for our library, but as a gift, even for a four year old, it turned out to be perfect. She loved it! 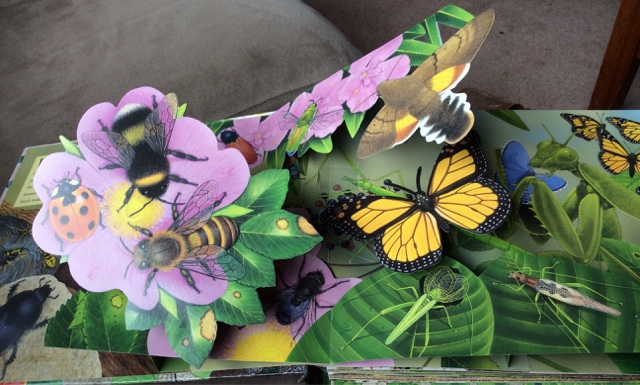 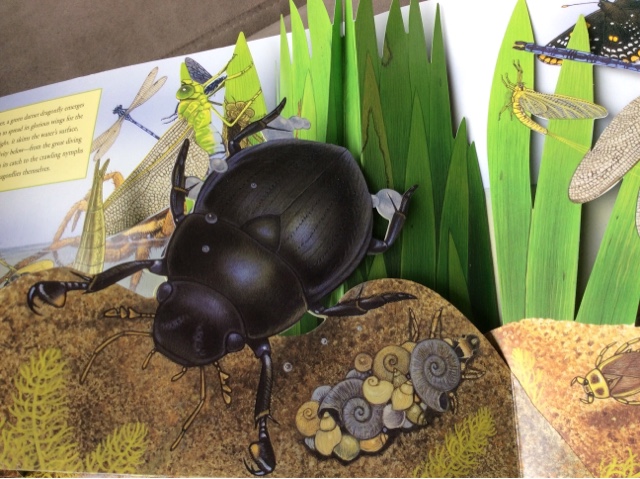 This book is beautiful. The images are absolutely stunning. It flows together across the pages in a larger type pattern poem that becomes the title for each page. For example, A Beetle is Kaleidoscopic shows the colours of beetles in all their glory as well as a brief explanation. This would be a book I would pair up with one that shows photographs since as beautiful as these illustrated images are, they can't compare with the true iridescence of actual images of real beetles.

The Bear and the Piano by David Litchfield

I finally found time to read this book! This exquisitely illustrated story of a bear who finds fame and fortune reminds us what is most important in our lives. Sure there is stuff about perseverance and all that, but there are many very talented people out there who don't get this kind of recognition. Really, the bear was lucky the girl and her father saw him. Ultimately, what is important is our relationships with others.

Currently
I started reading Feathered by Deborah Kerbel but then realized All Rise for the Honorable Perry T. Cook by Leslie Connor has to be returned to the public library by Thursday, so I will abandon Feathered till I get that one done. I'm searching for a just right audiobook to listen to. I've got Bird by Bird by Anne Lamont, but I think I need something more frivolous, so A Hundred Horses by Sarah Lean will be what I start.

Up Next
I have no idea - it's June for heaven's sake!
Posted by Cheriee Weichel