Mind Blowing Series I Read in 2015

I'm not generally a huge fan of series. I often read the first one so that I will be able to communicate with our readers about them. However, there are some series, that while individually each title might not stand out, as a whole they become addictive. Here are a few I happily recommend. 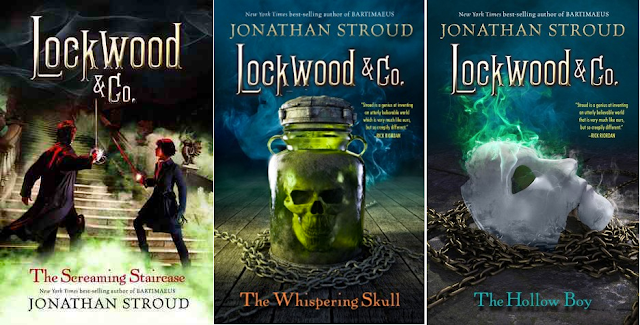 My gosh but this is the best series I've read in ages. A team of three children work to rid London of dangerous ghosts. This series is filled with lots of action, adventure, and brilliant character development. It appeals to every gender and every age. I've given the first two of them 5 stars and just downloaded The Hollow Boy to listen to on our journey home from holidaying. I'm already lusting after the fourth in the series, still untitled.

The Penderwicks by Jeanne Birdsall

I love this family so very much. I look forward to finishing the Penderwicks at Point Mouette and hope Birdsall is writing more about them. This would make a fabulous read aloud, but I do have readers who love this series as much as I do.

This series hasn't taken off as well in our library as I would have liked. On the other hand, a few mothers, who are fans of Carriger's fiction for older readers, are loving it. I wish Carriger had done a better job world building in the first book. It was easy for me to transfer from the world of her other titles to here, but I can see that it would be a problem for my students.


The Lunar Chronicles by Marissa Meyer

I became a compulsive listener of these books. Rebecca Soler's narrations are superb. There are few novellas that I will most certainly make time to go and finish to learn more about some of the characters. Seriously, what's not to love about a science fiction reworking of the basic fairytales?

This series has been a delightful surprise. They are adventurous titles filled with lots of action, suspense, and loads of humour. I started out reading these with my eyes before discovering Rupert Degas narration. I'll take them anyway I can get them now. Skulduggery, the skeleton detective, and his young female apprentice, Valkrie, battle vampires, evil sorcerers, necromancers and just about any other kind of otherworldly undead creatures you can imagine. They also solve mysteries.

To be honest, I've kind of become a fan of Katherine Kellgren's narration. In fact, I will listen to anything she narrates. I'm not sure if I am addicted to this series because it has such endearing characters, plenty of humor and adventure, and a large dollop of sweetness, or if it is just to hear Kellgren's voice again.

I started out reading this series and then discovered it was narrated by Kellgren. The rest is history. When three wild wolf children are discovered in some woods, Miss Penelope Lumley is hired to be their governess. She is admirably up for this challenge, but there are many strange doings afoot, and many stranger puzzles to be figured out.

Email ThisBlogThis!Share to TwitterShare to FacebookShare to Pinterest
Labels: series