We were away last weekend so yesterday we celebrated Thanksgiving again, only this time with immediate family. Cooking up that feast is a huge endeavour! Right now I am really missing a long weekend as I could use an extra day to recover. 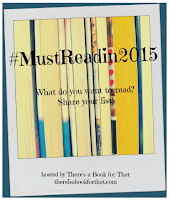 Still, at least tomorrow is Monday, and time for #IMWAYR! Thank you Jen at Mentor text and Kellee and Rickie from Unleasing Readers for hosting this weekly event. If you are looking for something good to read, check out the links on their pages. It is pretty much guaranteed to get you excited about what to read next!

At work it was another week of reading new (to our library) picture books. I carved out some time to listen to a few novels and read one chapter book. Finding really good chapter books that will hook children into becoming lifelong readers is one of my big challenges.

My heart ached a bit for Ben who is grieving the loss of his best friend, Peter, who has moved away. Ben decides to move also. He creates a cave under the table and becomes a caveboy. He stays in there and imagines a world where the two boys are still together. Eventually he is enticed out by the smell of popcorn.
I pretty much loved this book.
I wish it had been around when my son's best friend, (also Peter) moved away.

This Is Sadie by Sara O'Leary & Julie Morstad (Illustrations)

How I love this book. Sadie is a character you can't help but adore. It is another one of those books that as soon as I read it, I ran around showing it to any staff member left in the school. I adore the page that talks about Sadie's perfect day as it is also what my perfect day looks like. I am so looking forward to introducing Sadie to children.

Oh My! Kevin Henke is among the royalty of picture book writers and illustrators. These soft watercolor illustrations convey the perfect mood for waiting.
I love that each character is waiting for something different, or nothing at all.
It is deeply philosophical.

"Once a visitor arrived from far away.
He stayed a while," 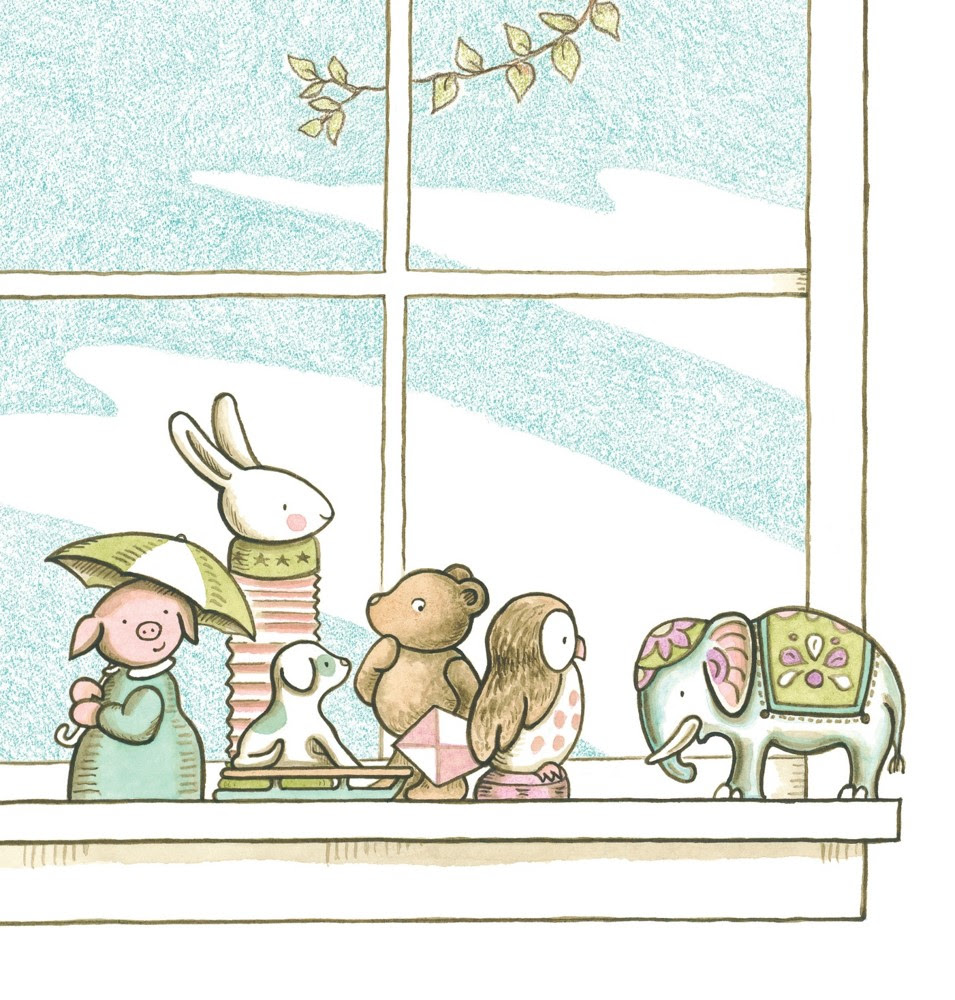 followed by this on the next page,

"then
he
left
and
never
returned."

broke my heart a bit.

Underground: Finding the Light to Freedom by Shane Evans

Stunning illustrations and sparse, powerful text tell the story of a group of African Americans fleeing slavery. The juxtaposition of these simple words against the dark and light images creates complexity and reveals so much about this historical journey.

My Pen by Christopher Myers

I'm continuing my literary love affair with Christopher Myers books. All I can say about this one is sigh.... so perfect!
Last week I talked about Wings by Myers. My Pen is as profound a text in different ways. It's an homage to imagination and creativity.


I absolutely love these illustrations! I think this will be an ideal text for learners who are just becoming readers because of the simple repetitive language on each page. I also like that it has a simple sweet message about friendship. I appreciated the final page where the pinecone makes his second appearance.

This is one of those classic conflicts between the old ways and the new. A young Inuit boy isn’t interested in the stories and skills of his grandparents until they are stranded on the ice. It is a lovely read and the softly realistic illustrations compliment the text.
I’m nervous about this book because I don’t know who the author and illustrator are, and I’m always concerned about who is writing books about First Nation’s people. I’m mindful of Jacqueline Woodson’s comment when she was here in Vancouver last spring. ‘How can I tell my story when your foot is on my throat.’
In the dedications thanks is given to Ataguttaluk Elementary School in Igoolik, Nunavut. (The school name is actually spelled Ataguttaaluk) If it was written in collaboration with these students, I would be more comfortable with it, even if the author and illustrator are not themselves First Nation people.

Jack is one of Billie B. Brown's friends. I think this realistic fiction is a good choice for children transitioning into chapter books. (That said, it has to pass the test of real readers) The text is large and there isn't too much on a page. In this one in the series Jack is forced to work in a math group with Alex, who Jack does not like. As the two boys learn to work together they start to enjoy each other's company. I like that while the boys get carried away by the competition, they also come to realize that winning isn't everything.

Upside Down in the Middle of Nowhere by Julie T. Lamana

This was some ride. At first I was caught up in the humour and love and joy in Armani Curtis' family. I knew what was coming, but I was still laughing out loud. This is what family looks like, people who care for one another and squabble.
The account of Hurricane Katrina held me in terrified thrall. As the black wall of water crashed towards them, I panicked alongside them. There were many moments when I held my breath. I prayed. At one point, I couldn't take it. I had to read the end before I went on. At least I could prepare myself for what was to come. I went back to read, and just when I believed that it couldn't get worse, it got worse.
I started this book one evening and finished it the next day while we were travelling back from the Okanagan. I turned on my iPhone flashlight to read because I just had to complete it.
Just about everyone knows about Katrina, but what this book does is put readers up close and personal with it.
I like that while there are intimations of the horrific acts that went on after dark in the refugee camp setting, it isn't detailed.
I'm looking forward to getting a copy and sharing it with my readers. Both the ones who want a gripping, gritty adventure, and those who fall in love with characters will love this one.

The Selection by Kiera Cass

This is so not my kind of book. (Argh!) I really don't like those novels that show girls or women in competition for a man. I hate books with mean girls and this one has at least one.
I read it to see what my readers find so fascinating. I didn't hate all of it. I enjoyed reading the parts about the young women getting along. I didn't even mind the budding romance between Prince Maxon and America. I actually liked Maxon. What irritated me was America's other love interest, Aspen. Seriously, the guy dumped her and when he arrives back on the scene she falls into his arms the first chance she gets! Good grief! How stupid can a girl be? Ok, she's seventeen, but seriously? Any respect I had for America's character was eroded beyond repair at that point.

(This took me back to memories of my teen years watching couples break up at parties. Suffice to say it involved alcohol, crying and fighting and eventually, making up. Shudder..  I hope I never have to contemplate that again.)

I guess I want my dystopian fantasies to be more proper. I'm not a fan of books with a love triangle either, so I'm not sure why I read it till the end. (Ok, I skipped over bits of it.)
Since I read this book to get a feel for how appropriate it is for my grade five, six and seven readers, who have been checking it out, I've decided, due especially to the heavy breathing make out sessions, that this is going on the grade seven shelf as soon as possible.
Then I'm going to encourage them the read Princess Academy, The Raven Boys, or The Uglies, or Matched instead.

I've been meaning to read this book for a while but just didn't get around to it. I enjoyed this tale of Tree-Ear, a young homeless boy who lives with his friend and guardian, Crane-Man, under a bridge. Tree-Ear becomes fascinated by the work of a perfectionist potter, Min, and eventually goes to work for him.
When the King's Emissary comes to inspect the local potter's work, he admires the new idea of inlaid work created by Kang, one of the local potters, but also appreciates the high quality of work done by Min.
Eventually Tree-Ear sets out on a journey to the court with some of Min's finest pieces of inlaid pottery to gain a commission for his master.
This is a lovely tale with a happy ending.
As an offshoot from reading this book, I became interested in reading a bit about the history of pottery, specifically Celadon and the "Sanggam" inlaid designs. I started out wanting to give it 3.5 stars. Making this historical connection added to my appreciation for the book and so I increased my rating to a 4.

I started this book because I've been desperate for literature that won't leave me feeling wrung out. I also wanted to know if this series, that we have in the library, needs to be read in order. I haven't read the first one, and this one seemed just fine without it. It isn't stellar literature, but it is an enjoyable read about a very smart kid, Theodore Boone, son of two lawyers. In this story, his friend April is missing. The authorities are unable to find her, so Theodore and his friends have to find a way to track her down and save her.

CURRENTLY
I started too many books for me last week. I'm almost down to a reasonable number. I tried starting The Hollow Boy (Lockwood & Co #3) by Jonathan Stroud, but haven't had time to really get into it yet. I know that once I start, I won't be able to stop. I thought I could get into The Story of Diva and Flea by Mo Willems, but I just haven't had time to sit down and read. Maybe tonight I'll find time.

UP NEXT
I really have no idea. I'll see what comes available from the library. I've got The Shepherd's Crown by Terry Pratchett, but I can't bear to start it because I know that when it is done, it really will be the final visit with Tiffany Aching. I still haven't found my missing library books, but I did find Amanda in Alberta: The Writing on the Stone by Darlene Foster, a book that I lost ages ago!