A Few Tales to Trouble Your Sleep

Halloween is my favourite time of year. People get dressed up in all kinds of weird, wacky, and wonderful costumes. Sometimes they are even scary. I love the decorations, the carving of the pumpkin, the making of witch finger cookies. Maybe the best part is that it's permissible to eat as much chocolate as you want!

October is also the time to read a scary book or two. We have many fabulous Halloween Picture Books in our library, but here are a few, new to our library, that are sure to entertain readers of all ages. 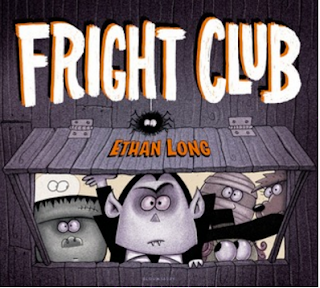 A group of monsters have an elite club where they get together to practice making their best moves, sounds, and gruesome faces in preparation for Operation Kiddie Scare. Then a cute little bunny comes knocking and wants to join. It is refused and the monsters continue with their rehearsal. Then the bunny returns with his lawyer. Soon all the cute critters are protesting outside the club and the monsters inside are terrified.  Operation Kiddie Scare turns out to be more successful than ever.

I read this to a lovely group of K/1/2's this week. There was a gasp of horror when the club members wouldn't let the cute little bunny join. Then at the end of the book, I heard a couple of murmurs, "That isn't a very nice thing to do."

I'm so proud of our kids and their teachers! 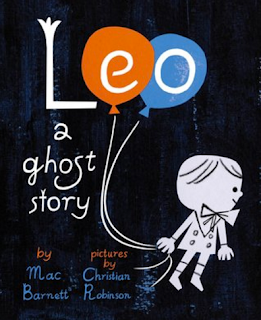 Leo is a ghost. Most people can't see him. (But we the readers can.) When his house is purchased by a family, Leo tries to make them welcome with disastrous results. He leaves his home to the terrified family and sets of to make his way in the world. Luckily he meets up with Jane, a girl with copious amounts of imagination and heart. Soon the two of them are best friends. 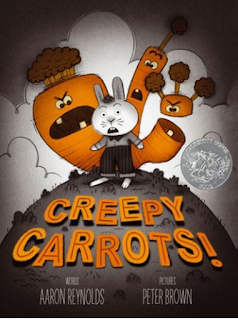 This one isn't exactly new, but it is a recent addition. It's scary in a really fun kind of way as the carrots manage to get back at Jasper Rabbit for eating them all the time. Peter Brown's illustrations are just right with Reynolds text.

I've posted about scary novels to read at this time of year before. The following are a few novels I've read this past year that deserve to be recognized and read. Hopefully the nightmares will be minimal.

These first two books are ones I just couldn't finish. They are too terrifying for me. I think it is a testimony to the stellar writing by Holly Black and Libba Bray. If you are looking for an exceptionally written book that will trouble your sleep, check these out. 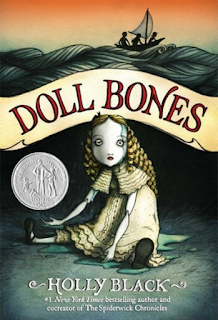 I've tried to finish this book three times. I tried to listen to it as an audiobook, I tried reading it in text form. Then I tried the audiobook again. Each time a manage to get a bit farther in, but it is just way way too creepy for me. Here's the thing, the doll is made from porcelain. The porcelain is made from the ground up bones of the doll maker's daughter. Need I say more? 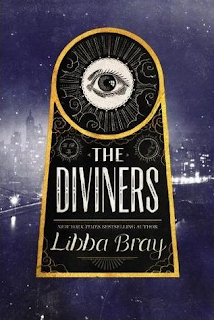 The Diviners by Libba Bray

I only tried to finish this book once. It just freaked me out so much, I'm not prepared to take another stab at it. Maybe when I'm grown up a bit more I'll try it again. It's a 1920's historical novel with a murder mystery and characters with all kinds of strange occultish powers. Evie O'Neill, the heroine, is ecstatic to have been sent off to New York because of some misbehaviour, connected to her paranormal ability.

Here are a few scary novels that I did manage to finish. 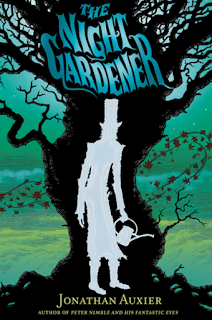 The Night Gardener by Jonathan Auxier

This is one of the best and most terrifying books I finished last year. Even though they are warned away, two orphans end up in a cursed manor house. Something very evil abides there. Their lives, and the lives of the family living there, depend on them destroying it before it destroys them.

Even though it nearly scared the bejeesus out of me, I adored The Screaming Staircase, the first in this series. Imagine a Victorian setting where ghosts have been unleashed upon the world. Imagine that only teens and younger people can see and sense their presence. Lockwood & Co is a trio of young teens who go out hunting these ghosts. It is very dangerous work. The next in the series,  The Whispering Skull, is better than than the first, and this is saying a lot. I've got #3, The Hollow Boy, waiting for me to get started on it. The following videos show Stroud introducing the series and reading from the first chapters. 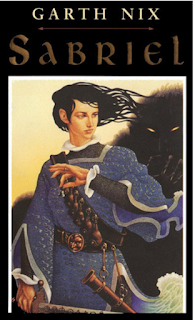 "Sabriel, an 18 year old girl, inhabits a world that is separated into two parallel realities. Ancelstierre, is a more modern place with technology. The Old Kingdom is a place filled with magic. A wall separates these two places, but on occasion, magic spills across the wall into Ancelstierre. When Sabriel is forced to take on her father's mantle as Abhorsen, a magical personage whose role is to put the dead to rest, she heads off into The Old Kingdom to find him and try to bring him back to the living.
On the way, she has to battle numerous evil undead creatures. Ultimately, her task is to find Kerrigor, the most powerful necromancer ever, and defeat him, or at the very least, curtail his power."
This is definitely a dark adventure. 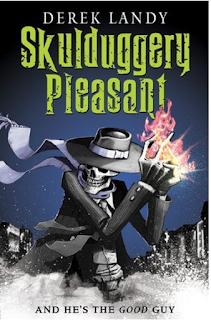 I ended up getting hooked on this series last year and have finished up the first six books. If you like creepy books with massive amounts of action, and a large dollop of humour, this might be for you. Skulduggery himself is a detective who just happens to be a skeleton. Twelve year old, Stephanie Edgley, is his assistant. There is much to love about these novels, but one thing that keeps me coming back for more, is that Stephanie grows up and takes on more responsibility as the saga continues.


Here are a few other terrifying titles you might be interested in reading at this time of year. The first two are easy reads for reluctant readers. Clicking on the captions will take you to more information about them.