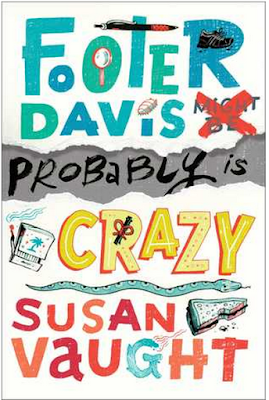 This story takes off like a cannon shot with Footer's mother killing a snake with an elephant gun and injuring herself in the process. It's dramatic, but also bizarrely funny.

From this beginning, and the following excerpt, I anticipated this book to be filled with humour.

"Angel was only eight, but she had a thirty-year-old brain, and she talked like a politician. That's why she had no friends and had to hang out with us. Peavine and I, we looked after Angel, because our parents expected us to, and because she grows on you after a while, kind of like a nasty toenail fungus."
I was wrong and right at the same time.

Footer Davis is a remarkable character who is going to stick with me for awhile. She's got way too much on her plate: a bipolar mother who is in an institution, flashbacks from an event she wasn't supposed to be at, a father who won't believe her, and a cold, brooding fear that she is crazy like her mom. It seems like she's been binge eating while sleepwalking.

Add to all this, the mystery of who killed Mr Abrams, set his place on fire, and what happened to his two grandchildren? Was her mother involved?

On the positive side she's got a remarkable best friend in Peavine, a supportive teacher in Ms Malone, a neighborhood full of supportive adults, and now, because of her fascination for serial killers, a social worker trying to help her.

This is truly well written. I was sucked into the story from the get go and finished it in one sitting. I even shed a tear or two.

However, I do have some concerns about the veracity of the mother's bipolar treatment. I don't think modern medication leaves people so dopey on a regular basis as this book suggests. None of the bipolar people I know have these issues and they live pretty productive lives.
Posted by Cheriee Weichel