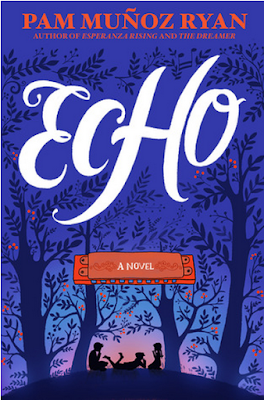 Wow! what an amazing read. If I wasn't already a fan of Pam Muñoz Ryan's work, I sure would be now.
Echo is historical fiction with a dash of magical realism and beautiful music.
The story is told in three main parts as it tracks a magical harmonica across the world. Each section tells the story of a child who comes into possession of the harmonica and how it changes his or her life. As a testimony to the author's writing, I came to care deeply for each one of them.

Germany is the setting for the introduction as a young boy, Otto, gets lost in the forest, meets up with three abandoned sisters, and ends up with the magical harmonica.

Friedrich's story begins decades later against the backdrop of the rise of the Nazis in Germany. He is a gifted musician who hears music inside his head. His life is full of challenges, not only because of his birthmark that results in his being called Monster Boy by his peers. His family is ripped apart by their different perspectives on Hitler's Germany.

The second and third parts are set in different parts of America. Part two is set in Pennsylvania during the Depression era. It tells the story of Mike, another gifted musician, and his younger brother, Frankie. These two orphans are desperate for a real home. Whether or not Frankie will find a place with Mrs. Sturbridge is dependent on Mike winning a contest and joining a Harmonica band.

The second world war is raging as Ivy Lopez's story begins. Ivy dreams of making music. Her family are migrant workers. They have a chance to find a permanent home on a farm owned by a Japanese family who have been forced to live in an internment camp. This new life isn't as positive as they imagined since Ivy is segregated into a second class school because of her Latino heritage.

Each of these sections ends on a cliffhanger. It isn't until after the end of the third part that the culmination of each of these stories is revealed, and we learn what happened to all four of these children.
This is a beautifully written book. There were parts that made me cry. I was terrified at times as I kept making connections from the manipulated racism of that era, to what is going on in Canada today.

Echo is one of the most superb audiobooks I've listened to in a long time.
Each part of the story is narrated by a different person. Mark Bramhall, David de Vries, Andrews MacLeod and Rebecca Soler's voices were perfect in capturing the separate characters. Being able to actually listen to the music referred to in the story made my experience much more profound.
I was conflicted as I read this story. I hated it to end, but I really needed to find out what happened to all these different characters. I can't remember when I was so satisfied with a book. If you haven't read this, make sure you add it to your must read list. If it is on your list, bring it to the top of the pile.