We Are All Made Of Molecules by Susin Nielsen 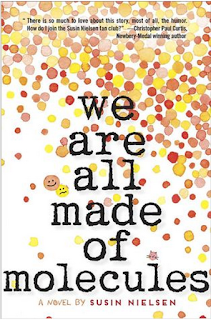 We Are All Made of Molecules is told in two voices.

Ashley is a seriously irritating 14 year old. She is filled with anger since her father announced he was gay, and their family fell apart. She comes across as bitchy, shallow and insecure. I didn't particularly like her at first.

Stewart is a gifted 13 year old who is grieving for his mother who died a few years ago. He is socially awkward, but aware of it. In spite of this, he seems to have a capacity for empathy that Ashley, at least at first, seems to lack.

Stewart's father and Ashley's mother have fallen love and decided to move in together. Ashley is negative right off the bat, whereas Stewart has reservations, but is hoping for positive outcome.

It doesn't help their relationship that Stewart is going to the same school as Ashley, and to top it off, is in some of Ashley's classes. Then it looks like Stewart is going to have trouble with Jordan, a new kid at school, but when Jordan discovers that Stewart is Ashley's stepbrother, he lets up and even arranges for Stewart to become the school mascot. Eventually Stewart is instrumental in helping them pair up. It's all good until Stewart realizes that Jordan has a dark side and is dating Ashley for nefarious purposes. Unfortunately, Ashley is so self absorbed that she wouldn't listen even if he told her.

It takes near disaster before the two step siblings finally reach a truce. Thankfully the crisis forced Ashley to to see the world through clearer lens.

What works for me:
I appreciated the parents in this book. They are mature adults who care about their children. When they have problems, they work them out.
I liked reading about neighbourhoods and shops that I am familiar with. It's an affirmation that who we are matters.
While Ashley's father is gay, it's his keeping a secret for so long that is the problem for Ashley; his being gay is really no big deal.
I am also impressed that even though I didn't like Ashley at first, I still ended up caring for her.
I love that students who Ashley had disdained to have anything to do with at first, were the ones to gather round her when she was down.
Students can have some thoughtful discussions about which of these two are truly socially dysfunctional.

What doesn't work:
Stewart had been seeing a therapist after his mother's death and continued with her when it was an emergency. Given Ashley's parents fairly high economic status, it seemed incongruous that she wasn't sent to one after her parents divorce.
Ashley's nearly overnight metamorphosis from spoiled brat to humanitarian felt unrealistic to me. (But I'm not overly upset about it.)
This book teeters between middle grade and a young adult fare. There is a party with drinking and some predatory sexual behaviour that will make me cautious about who I recommend it to.

I read this through Netgalley, but I am adding it to my shopping cart so it will be here for next September!