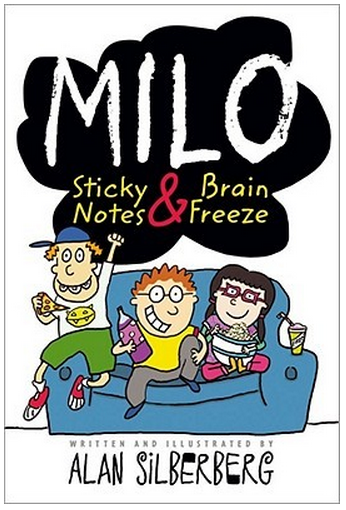 I'm exceptionally thankful this book was on my 2014 to read list. If not for that, I doubt I would have picked it up on my own. I must have read great reviews, added it to my to list, and then forgot about it.

I don't generally like books with dumb boys in them. I've read Diary of a Wimpy Kid, and Captain Underpants and I know they have a place in our library, but I think boys deserve so much more than a diet of just that kind of reading fare.

This book is deceptive. It is so much more than its cover. The comments I read comparing it to Diary of a Wimpy Kid, don't resonate with me, other than that both combine text and drawings.

This is a book with substance and depth. Sure there is humour, but I spent more time wiping my eyes from crying than laughing.

The backstory is that Milo's mother died a few years before and the family has never come to grips with her death.

The tale begins with Milo, his sister and father having moved into their fifth home. He has to start a new school and make new friends all over again. That, in and of itself, is complicated enough without the fog of grief that doesn't dissipate.

Milo's family was fractured by his mother's death. They don't communicate. They are like separate planets orbiting around a sun that isn't there any more. Thankfully, Milo finds people who help him along the way. Across the street, Sylvia, the older widow, helps him find a way to remember his mother and say goodbye. He learns to connect to his new friends, Marshal and Hilary, who accept him as he is and are prepared to listen when he needs to talk.

I defy anyone to read this book and not love these characters, the writing, and the illustrations that add oomph to the storyline.

Here is an example of how Silberberg integrates everything so brilliantly. A couple of books and authors came to mind as I read this book. The first is Walking Backward by Catherine Austen. In it a young boy and his family come to grips with their mother's bizarre accident. Every reader I give it to, loves it. At the same time as it deals with a hard subject, it is filled with dark humour and plenty of information about death.

Another connection I made was to Jordan Sonnenblick, an author who writes stories about real boys, boys who are smart, boys who can be goofy, boys who care, boys who deal with hard stuff. I've got a lit circle set of After Ever After that is almost always checked out. Even Sonnenblick's fiction for younger readers, like his Dodger Series, combine humour and serious issues.

I can't wait to have conversations with readers about this book. I already have a handful of children I want to give it to.