The Dry by Rebecca Nolen 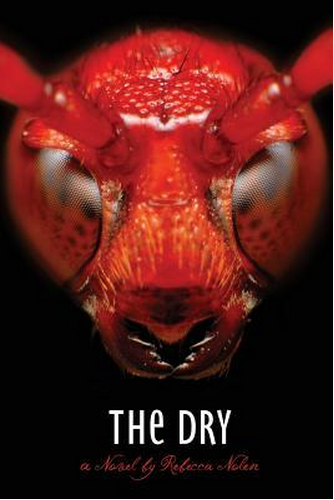 In 1895, the state of Virginia was experiencing a "deathly dry," a drought so intense that "thick clouds of dust hung chest high all day. Open windows let it inside where it coated every surface." In the midst of this, a journalist, Sam Sweeney, left his son with his uncle, and set off to discover why children were going missing from a coal mine. Then he too he disappeared. Three months later, when the search for him was called off, his 12 year old son, Elliot, went to search for him.

Luckily, Elliot met up with Lefty, a young girl, who was searching for a brother who had gone to work in the coal mines but never returned. Soon the two of them ended up racing for their lives from Mr Nogard, a malevolent rat like man.

Their search takes them deep underground into the world of Penumbra: a world long ago fractured into a Dry side and a Water side, a world embroiled in a battle between good and evil. "There's a dragon, there's the insects so big they could chomp off a child's head in one bite, and of course, there's The Wicked Prince of Every Place himself"

It's a world wherein it appears that this evil creature, Prince Levane, a monstrosity composed of insects, and ruler of the Dry, might win. He collects child slaves to work his diamond mines and feed the water devouring moon he has created. If he manages to win, he will destroy all of Penumbra, and the upper world with it.

It's up to Elliot to travel across a fiery sea, climb a living mountain, meet up with Tosia, Queen of the Water, and convince her to help him rescue Lefty, his father, the other child slaves, and the earth itself.

Nolan has manufactured a sinister world here. She is gifted with the ability to craft sentences that set a dark and ominous atmosphere. Elliot has barely left home when tension and suspense is established in a few lines, "The landscape faded as dread darkness crept on spider legs across the fields. Nightfall always left him feeling like there wasn't enough air in the world."

Wasps have an important role in this saga. Hints of their role are revealed through the fascinating wasp facts that precede each new chapter.

This is a story about trust, about foolish misunderstandings, about love and loss and heartache. It's about redemption and new beginnings. It's also very creepy which makes it an ideal horror story for my readers.

It has an intense beginning which is sure to pull readers in. When the initial excitement faded, I had to work a bit to stay engaged. To be honest, I was sick when I started this and maybe nothing would really have grabbed me by the throat and kept me enthralled. Still, I was too often frustrated by the foolish decisions these children made. I also wanted more from Lefty who was relegated to the role of damsel in distress, never mind her plucky beginning.

In spite of my quibbles, I can think of a number of readers off the top of my head, who will love this dark and satisfying read.