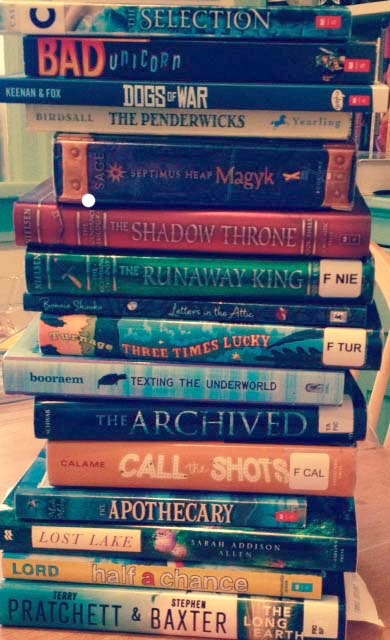 Amidst the fury of the last two days of the Scholastic book fair last week, and in spite of the fact that I already had a pile of my own waiting for me at home, I asked students to come up with a list of book suggestions for me to read over spring break.

Here are their recommendations.
The Penderwicks series by by Jeanne Birdsall - Every book this kid has recommended to me has been superb, so I plan to read at least the first one.
The Dogs of  Winter by Bobbie Pyron - I accidentally grabbed the The Dogs or War graphic novel from the book fair so I'll have to go looking for this one.
The Lightning Thief by Rick Riordan (I know I'm nearly the only person on the planet who hasn't read the series - I did try to read The Red Pyramid but abandoned it.)
The Selection by Kiera Cass
The Titanic Locket - I think this is the first in the The Haunted Museum series. I need to search for this one too.
Go Ask Alice - our copy was out - Ill have to see if I can find one at the VPL
Magyk by Angie Sage - It was suggested I read the entire series, but I'm starting with this one
Bad Unicorn by Platte F. Clark - probably one of the weirdest looking book covers I've ever seen - but I'll give it a try
Three Times Lucky by Sheila Turnage - thankfully this was on my list also
Call the Shots by Don Calame
Flora and Ulysses by Kate DiCamillo (I've already read it twice so I'm calling it done!)
The Apothecary by Maile Meloy (thankfully it was also on my list)

I've also got some Audiobooks waiting for me
The Dream Thieves by Maggie Stiefvater (I loved love loved The Raven Boys)
Legend by Marie Lu
Alanna: the First Adventure by Tamora Pierce

I doubt I will get all of these done. I have a garden to work in and family to spend time with, but I'm gonna try for a book a day!