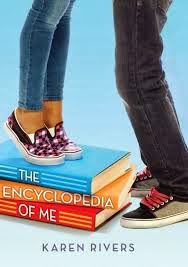 Getting grounded is not how Tink (Isadora) Aaron-Martin planned to start the summer before starting middle school. Bored, she decides to use the time writing her own encyclopedia. She figures it will take a long time - at least a week.

I admit to being enchanted by Tink from the get go.
I like that she is biracial, but that isn't what drives the story. I like that Tink has two older twin brothers, one of whom is autistic, but that doesn't drive the story either. They are a family struggling with the challenges autism brings, but it isn't the vortex.

Isadora's story is told in the form of an encyclopedia. (It reminded me of Totally Joe, an alphabiography, by James Howe) Each new entry invites us further into her life as she struggles with trying to stay connected to her BFF, Freddie Blue, find out what it is that she wants to do, and figure out if she wants a boyfriend. Freddie comes across as shallowly interested in hanging out with mean popular girls even at Tink's expense.

In the mean time, Isadora learns to skateboard, discovers a new friend in Ruth Quayle, and decides a boyfriend is okay if it is her new neighbor, Kai.

At times I was distressed by Isadora's dependence on Freddie Blue, and her readiness to defend her. Yet ultimately, it is also one of the things I like best about her. Isadora is the best kind of friend; strong enough to let go when she needs to, but because she truly understands Freddie better than anyone else, will always be there for her. I hope Freddie realizes this some day.
Posted by Cheriee Weichel