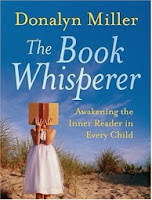 I've been reading The Book Whisperer by Donalyn Miller. She challenges her grade six students to read at least 40 books in a school year. I have been thinking that if 11 year old kids can do it, then so can I. I've taken my goodreads list and transferred it here. This is my official 2014 to read list. There are a lot of novels on it. Some are even books for adults. At least one book on the list, All the Blue Moons at the Wallace Hotel by Phoebe Stone, is going to be a challenge to find. I expect to read more books, but this is my formal list. The stars indicate books I've already finished and rated!

Autistic Brain: Thinking Across the Spectrum, The by Temple Grandin, Richard Panek

Because of Mr. Terupt by Rob Buyea
Beckoners, The by Carrie Mac
Between Shades of Gray by Ruta Sepetys
Boy at the End of the World, The by Greg Van Eekhout ★★★★
Counting by 7s by Holly Goldberg Sloan
Dance of the Reptiles: Selected Columns by Carl Hiaasen, Diane Stevenson
Darius & Twig by Walter Dean Myers  ★★★★
Dead in Their Vaulted Arches, The by Alan Bradley ★★★★★
Earth, My Butt, and Other Big Round Things, The by Carolyn Mackler
Eleanor & Park by Rainbow Rowell (Abandoned For Now)
Escape from Mr. Lemoncello's Library by Chris Grabenstein
Fourth Stall, The by Chris Rylander ★★★★
Guitar Notes by Mary Amato ★★★★
Hattie Ever After by Kirby Larson ★★★★
House You Pass on the Way, The by Jacqueline Woodson
How to Be Bad by E. Lockhart, Sarah Mlynowski, Lauren Myracle
I'll Be Watching by Pamela Porter
Imperfect Spiral by Debbie Levy
In Darkness by Nick Lake ★★★★★
Liesl & Po by Lauren Oliver ★★★
Long Earth (The Long Earth #1) by Terry Pratchett, Stephen Baxter ★★★★
Lost Lake by Sarah Addison Allen ★★★★
Marie Antoinette, Serial Killer by Katie Alender ★★★
Milo: Sticky Notes and Brain Freeze by Alan Silberberg
Moon Over Manifest by Clare Vanderpool
My Life as a Book by Janet Tashjian, Jake Tashjian
Naked Mole-Rat Letters, The by Mary Amato, Heather Saunders (Illustrator)
Okay for Now by Gary D. Schmidt ★★★★
Oryx and Crake by Margaret Atwood
Raven Boys, The by Maggie Stiefvater ★★★★★
Revenge of a Not-So-Pretty Girl by Carolita Blythe
Ring of Fire by Pierdomenico Baccalario ★★★
Rump: The True Story of Rumpelstiltskin by Liesl Shurtliff ★★★★
Sammy Keyes and the Hotel Thief by Wendelin Van Draanen ★★★★
School of Essential Ingredients, The by Erica Bauermeister
Shadow Scale (Seraphina #2) by Rachel Hartman
Spindlers, The by Lauren Oliver ★★★★
Star of Stone by Pierdomenico Baccalario
Summer Days, Starry Nights by Vikki VanSickle ★★★
Super by Matthew Cody
True Blue by Deborah Ellis
Unfinished Angel, The by Sharon Creech
Waking Kate by Sarah Addison Allen
Water Castle, The by Megan Frazer Blakemore
★★★★★
What Happened to Ivy by Kathy Stinson
Whispers From the Ghettos by Kathy Kacer
Windup Girl, The by Paolo Bacigalupi
Wishing Spell, The (The Land of Stories #1) by Chris Colfer, Brandon Dorman (abandoned for now)
Year of Billy Miller, The by Kevin Henkes ★★★★

You can check out other 2014 must read lists here http://thereisabookforthat.com/2014/01/02/mustreadin2014/
Posted by Cheriee Weichel
Email ThisBlogThis!Share to TwitterShare to FacebookShare to Pinterest