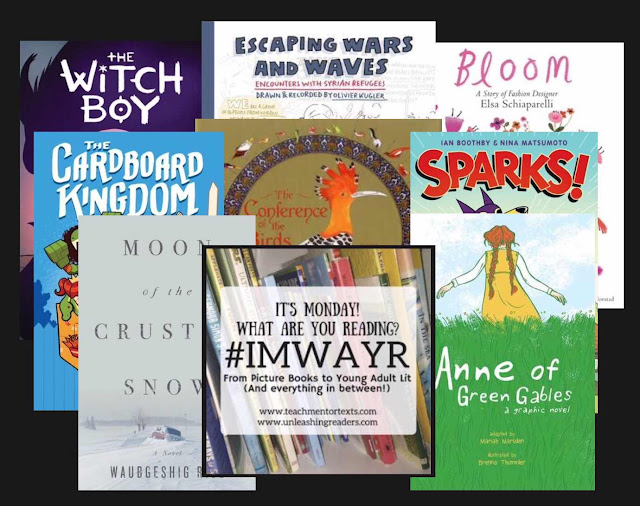 I managed to finish a baby quilt this week. It is the second in my foray into modern quilting. I decided to face this one instead of putting on a binding that would show. I like how it turned out, although I had envisioned larger overlapping circles when I sent it off to be quilted. 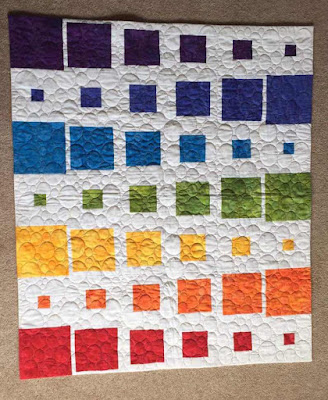 Now I'm working on a completely different project of an applique flower garden that my sister and I started last summer. We created flowers and buds together, and now my job is to create the vines, stalks, and leaves, and the pieced border.  She will hand sew all of it onto the background before it goes to be quilted.

I'm determined to limit my working schedule to three days a week. Not only does work cut seriously into my reading and playing with grandchildren time,  I get too exhausted working more than that!

OMG, this book is absolutely stunning. I recently read Peter Sis' adaptation of this poem and didn't think anything else could possibly compare. I was wrong. Demi's birds are splendidly elegant. The golden borders on each page are lavishly spectacular. The prose is much more accessible and straight forward than Peter Sis' version, although both are beautiful to read. The book trailer below will give you a hint of what's inside.

This is one of those books that lifts you up and makes you happy to be alive. It's as beautiful on the inside as the cover shows. That pink, designed by Elsa Schiaparelli and a chemist, made me giddy with delight. I'm not a particular follower of fashion but I was delighted to learn about this amazing woman who followed her passion and fulfilled her dreams. Both the author and illustrator of this are Canadian!🍁

Moon of the Crusted Snow by Waubgeshig Rice

At the onset of winter, a Northern Anishinaabe village loses cell service, TV, internet and electricity. It’s not an uncommon occurrence so they figure it will just be a while and everything will be back to normal. But when a couple of their 19 year old sons make their way home from college on a snowmobile, they realize it’s a more global shutdown. It seems that the apocalypse has begun.
Evan, the main character, is an honorable man who works for the band, keeping the road open and doing what else needs to be done. He and his partner have two young children they are trying to raise in the traditional way. Throughout the book Evan and the other band leaders try to support the community as best they can.
When a large, weird, white man, Justin Scott, arrives in the village having following the teens' tracks in the snow, the community leaders let him in. Their concerns about him appear to be well founded when another group of white refugees arrives and Scott kills one of them. As the death rate keeps rising, Evan comes to understands more fully the evil Justin Scott brings with him. Their confrontation is inevitable. Although it is never mentioned in the book, I couldn't help but see Justin Scott as a Windigo.
Waubgeshig Rice is an indigenous Canadian. 🍁

The Cardboard Kingdom by Chad Sell & other contributors

I wanted to like this more. The art is gorgeous. It's dynamic and full of colour. The book is essentially a compilation of short stories that are like chapters in a book about a group of children in a neighbourhood. It's a celebration of imagination as they transform cardboard into costumes and unique creations that become part of a unique imaginary world. At the same time, it deals with some important emotional/social realities. It includes a multicultural diverse collection of children getting to know each other better and becoming more aware of their own identities. Some of them struggle more than others, but ultimately, they are all included.

This is just plain adorable. It's perfect for fans of Binky and other graphic novels by Ashley Spires who are ready to move on to slightly more difficult texts. It's loaded with humor, but that evil baby is hilariously perfect. Both the author and illustrator of this are Canadian! 🍁

This is quite beautiful. Right off the bat I was impressed with how Mariah Marsden and Brenna Thummler have captured the essence of Anne Shirley. Her dramatic flair is well represented by the art and text. There is one image in particular, of Anne jumping into a pile of leaves that Gilbert has just raked, that made my heart sing. I love that they have represented Marilla's stoicism as well as her tenderness for Anne. The depiction of Green Gables with its expanses of trees, gardens and different landscapes across time and seasons is almost enough to make me want to uproot my family and move to PEI.
My only quibble with the art is that in places, Anne's green eyes, shown as green circles, creeped me out a bit. So did her nose which appears to be pasted on. At times these two things distracted me and interfered with the continuity of the story.
Like another reviewer on goodreads, I also wonder why L.M. Montgomery isn't given any authorial credit. She was also Canadian. 🍁

The Witch Boy by Molly Ostertag

I love all that this book takes on. It's the story of a Aster, boy who wants to learn the art of magic: something that is traditionally only girls' work. Boys are supposed to be able to shape shift, but so far, Aster can't. The authentic multicultural characters are different colours and ethnicities. Charlie, the one regular human girl, has two dads. I love the connection between her and Aster. While there is a demon of sorts, it turns out that the people themselves, in their rigidness, are responsible for it's creation. The novel has beautiful artwork that is easy to follow. I appreciate the use of white neutral space depicting daytime and black for night. As I neared the end I was so engaged that I was zipping through the pages.

This nonfiction graphic text brought tears to my eyes numerous times. The book was commissioned by MSF (Doctors Without Borders) to portray experiences of Syrian refugees and raise awareness of their situations. It's a hard read emotionally, but worth it. Olivier Kugler explains that all his requests to interview women at the Domiz Refugee camp were turned down. He was able to speak to some women in camps in Europe. The result is that these are primarily narratives of men, but there are a few stories of women.
The book tells many different individual and family stories. All of these people fled Syria fearing for their lives. Their journeys are harrowing and heartbreaking.
There is a kind of chaos to how the book is formatted with what at first glimpse seems to be images and text haphazardly strew across the page. Some of the text is organized with numbers and arrows. On other pages I started at the top left hand corner and worked my through it. It all ended up making too much sense to me. The artwork is crowded and images at times feel fluid and without proper outlines. This format creates a kind of instability that leaves the reader feeling out of control and not sure what is going to happen next. It's brilliant. I hope it's as close as I ever get to being a refugee.

I will be reading many graphic novels as I must have to have all the Cybil nominations read soon!