I'm following the lead of Shaye at The Miller Memo, so if you clink on the title link for each book, it will take you to the GoodReads page for that book. 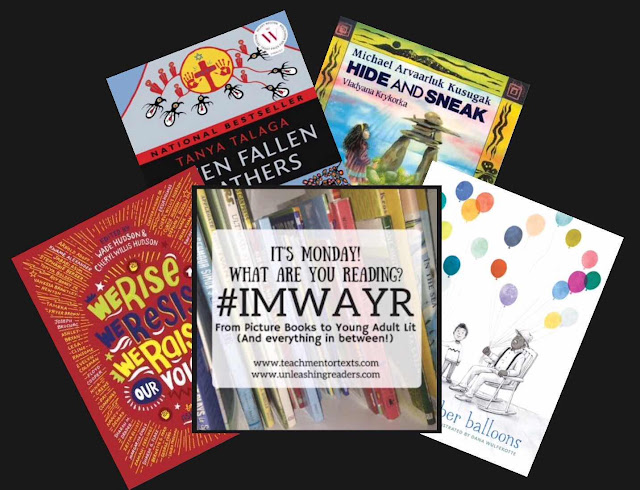 It was an intense reading week. It feels like I didn't finish much, but what I did read will stay with me for a very long time. Aside from that, I finished one pair of gloves for a daughter-in-law's Christmas gift and have started on another pair for the other one. (I swear that with all the pulling out and starting over I have knit at least 2 pairs already!) I have almost completed another baby quilt too! 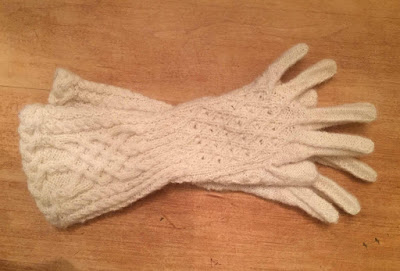 This endearing picture books shows the impact of Alzheimer's Disease on a grandfather, his grandson and their family. The analogy of the balloons as keepers of memory is brilliantly done and will help other young people understand this debilitating illness.

Allashua is not very good at hiding. She loves to play hide and seek, but ends up getting distracted by butterflies, flowers, fish in ponds and all kinds of delights around her in her northern world.
Unfortunately, Ijiraqs are very good hiders. If they help a child hide, the child is never heard from again. Allashua can't believe the stories when she meets a cheerful Ijiraq and finds herself in serious trouble because of this. Luckily, Allashua is very smart and manages to save herself!

Allashua is also featured in A Promise is a Promise, a book this team worked on with Robert Munch.

Vladyana Krykorka's illustrations in this and the other books she works on with Michael Arvaarluk Kusugak are stunningly gorgeous.

Starting this title after finishing up Killers of the Flower Moon was probably not a good idea. It was a jump from historical racism into its modern day counterpart here in Canada. This is intense and not easy to read.

It's going to be the most important book I've read this year.

Tanya Talaga painstakingly takes the reader through a detailed chronicle of how the Canadian government explicitly attempted to destroy indigenous peoples. It begins with with the horrors of the residential school system, the death of Chanie Wenjak in 1966 and on into today with a federal government that still refuses to fund indigenous education at the same rates as the rest of the population.

She leads us through the lives and deaths of seven students from 2000 to 2011: Jethro Anderson, Curran Strang, Paul Panacheese, Robyn Harper, Reggie Bushie, Kyle Morrisseau and Jordan Wabasse. All were forced to leave their homes and cultures and travel to Thunder Bay, Ontario, to get a secondary education. Aside from numerous hate crimes and assaults, there have been at least 6 more suspicious deaths since an inquest into those deaths was held in 2012.

According to Robert Jago, from an article in The Walrus titled, The Deadly Racism of Thunder Bay, "First Nations lives are being lost at an alarming and disproportionate rate in Thunder Bay. While the city accounts for barely 5 percent of the Indigenous population in Ontario, it accounts for roughly 37 percent of the province’s Indigenous murder victims. Thunder Bay has more than three times as many First Nations murder victims than the entire province of Quebec, which has more than twelve times as many Indigenous people. In raw numbers, more Native people are murdered in Thunder Bay than in any Canadian city, save Winnipeg."

There are those who think a serial killer is on the loose. It's not hard to believe after reading the book. It is a damning revelation that highlights the institutionalized racism of the police, all levels of the justice system, as well as the provincial and federal governments. Citizens of the city don't come across very positively either.

We Rise, We Resist, We Raise Our Voices by Wade Hudson, Cheryl Willis Hudson (Editors) & others.


Just WOW! This book, with writing and artwork from many talented creators, written to bring hope and inspiration to their children, ends up bringing it to all readers.
This quote From Drumbeat for Change by Kelly Starling Lyons has stuck with me, "The drumbeat of hope will always drown out howls of hate."

I'm halfway through listening to Transcription by Kate Atkinson. I'm reading nothing with my eyes. I've started and stopped about three different novels this week though I did read more of A Thousand Beginnings and Endings than anything else. I needed light and hopeful to contrast with my nonfiction reading and I don't have anything like that in the house.

I'm planning on starting Lost Soul, Be at Peace by Maggie Thrash. My next nonfiction title will be something completely different from what I have been reading: Shark Lady: The True Story of How Eugenie Clark Became the Ocean's Most Fearless Scientist.

Two of my goals have been reached!