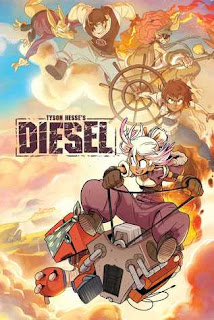 Diandra (Dee) Diesel’s father, Tungston Diesel, disappeared years ago in a raid by the Teppan, a nation of birdmen, who are their archenemies. On her 18th birthday, she will inherit control of Peacetowne, the airship colony she calls home. She looks forward to taking over ownership, but has not learned anything about running it. She is brilliantly lazy with no awareness of her latent superpowers other than that she creates a lot of static electricity.

The day before her birthday Dee finds a machine made by the Teppan. She manages to start it without knowing how. When the birdmen come looking for it, Dee and her robot escape, but Peacetowne is destroyed. She thinks she saw her missing father on the Teppan vessel.

When Dee crash lands in a wasteland on solid ground she is rescued from vicious coyotes by her brother Bull who she has not seen in years. The two of them come up with a plan to destroy the Teppan who have headquarters in Stableburg, Bull’s city. If they survive that they plan to warn the Gass people of the Teppan plans, see if they can find the ruins of Peacetowne, and rescue Tungston Diesel.

There are a number of things I liked about this book.
Gorgeous illustrations loaded with details reveal fabulous worlds. Action scenes are vibrant and powerful. Bright oranges, reds and yellows contrast with dark greys, greens and blues.  Emotion is fully realized on the different individual faces. The witty repartee and humour of the text makes the reading fun. It is populated with mostly multifaceted characters who grow and develop as the story progresses. Irresponsible and selfish, Dee Diesel is not at first a sympathetic character. Thankfully, by the end of the book, she has matured somewhat. I even came to grudgingly admire her.

I appreciated the complexity of the relationships between the different groups. While the Teppan are considered enemies, we learn that they were irreparably damaged by chemical warfare in a previous conflict.

I do have a number of quibbles with this and for me at least, they are not inconsequential. First, the font is so small I had to go and find my reading glasses, (although to be fair, this is a reality for all the graphic novels I am reading these days.) Second, while I appreciate the strength of Dee and Cap, who pilots Peacetowne, I do not like the Barbie doll shaped bodies of these two young women. Finally, the trope of conflict between the only two women in the novel just irritates the heck out of me. 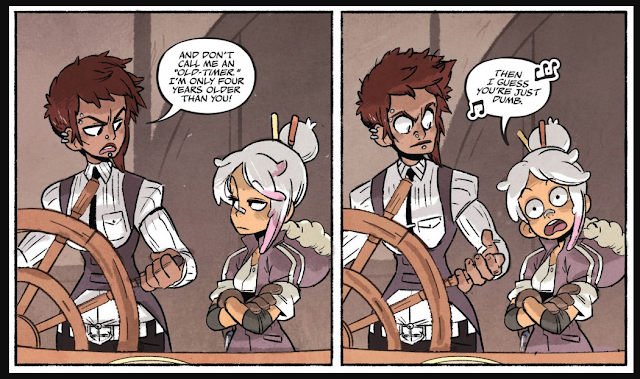 While the novel ends with a satisfying conclusion, there are still plenty of questions to be resolved in sequels. I can’t help but wonder if Tungsten Diesel is working for the Teppan voluntarily or involuntarily. How many of Peacetowne’s residents, if any, survived the crash. I might have to read the sequel to find out.