Suee and the Shadow by Ginger Ly & Molly Park 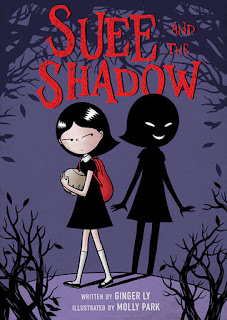 Suee Lee and her father have moved from Bustle Elementary, on Bustle Street in Big City to Outskirts Elementary in Outskirtsville. Moving to a new school is fraught with challenges already. Making friends and navigating bullies are of a higher priority than academic excellence. Suee seems immune to this because she only wants to be friends with people who are her equal. However, on her first day of school she has an accident in the 'Exhibit' room that lands her in the nurses room, although she has no memory of what happened. That night her shadow starts talking to her. 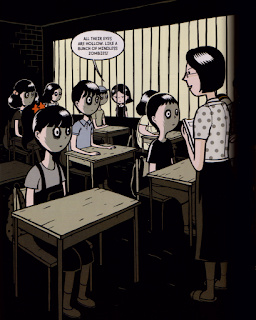 Soon afterwards the vice principal starts up an after school club for students who are considered 'losers' by their peers. To their peers they are like zombies and have no shadow. These so called 'zero' students are acknowledged by other students, but adults notice nothing. It's a harsh hint to adult readers about how much we miss about the reality of childhood and adolescence.

Suee connects with two other students, Haeun and Hyunwoo who start up the Zero Detective Agency. Their goal is to figure out what is going on and how these students ended up like this. However, soon Suee's shadow takes control of her and she discovers that the problem is much closer to home than she could have imagined.

I love so much about this book. I appreciate that the book reveals that Suee's attitude of not caring and claiming that these bullied children are none of her business is comparable to the bullies actions. I'm thankful that it shows that it is ok and even necessary to ask others for help when problems are out of control. I love how her two compatriots show Suee how to be a better person.

The crisp illustrations are primarily black and white and shades of grey with sparing use of other colour; mostly purples reds and orange. This establishes an ominous backdrop for an already creepy story. Once I finished the novel I went back and reread the prologue. Noting the eyes of the young girl in that section helped put the whole narrative into perspective.

The main characters are richly developed although I wish that the popular girl bully, Yejin, had more depth to her. The contrast between her and Hyunwoo, who is popular, smart, and kind is an important distinction.

I handed this over to my Korean daughter in law to read. She informed me that this was a classic Korean style of illustration. She felt that the book resonated Korean culture. I see it as telling a universal kind of story from a Korean perspective. We are both full of questions and wondering. What will happen to the trapped soul? Why would someone want such a pot created in the first place?

I generally hate books that end in cliffhangers, but this book has the kind I can live with. The essential problem in the book is resolved. The ending is more of a hint for what will happen in the sequel. You can bet I want to read it.
Posted by Cheriee Weichel