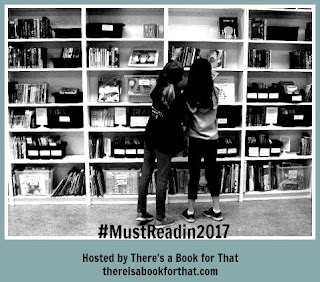 Last January I joined Carrie Gelson at There's a Book for That, and other readers who blog about books, to commit to reading specific books on our ever increasing (at least mine is) Want to Read list on Goodreads. Last January I created two lists, one for fiction, and one for nonfiction. You can see my original lists here. Here is how I am doing so far.

Well, at least I'm not as far behind this time as I was at the Spring MustRead update! In fact, I'm almost caught up. Well I will be caught as soon as I am finished with the pile of books sitting on my shelf waiting for me. At our last update I was far behind, but since then I have read 15 more books, bringing me to 23 of the 36 I put on my list. To be on top of my schedule I should be at 25, but what are two books? Catching up hasn't been a hardship since all of these were absolutely amazing. I can't begin to compare them. They are all of them fabulous reads for different reasons.

That said, there are two that have especially stuck with me.

The Hate U Give by Angie Thomas is going to be, flat out, one of the most important books published this year. If you haven't read this book, it should be on your list.

I've recently finished Indian Horse by Richard Wagamese. This book has been around since 2012. It is a heart wrenching, intimate look at the horror and damage wrought by the residential school system. Load up on tissues before you start.

Some of these authors intimidate me with their brilliant talent.

Lamb: The Gospel According to Biff, Christ's Childhood Pal by Christopher Moore was hilarious and profound all at the same time.

Tim Tingle's storytelling in House of Purple Cedar is just about the finest I've come across in ages. Rose, the narrator relates the events of a time that was filled with evil and racism for the Choctaw people.

I don't think I have to capacity to appreciate the quality of writing in Madeleine Thien's Do Not Say We Have Nothing. It follows a Chinese family across time from the rise of the Communist Party through to the massacre at Tiananmen Square.

The three graphic memoirs on this list were wonderful glimpses into other people's lives.

Persepolis 2 by Marjane Satrapi, is a fascinating look at Iran during and just after the revolution.

Fun Home: A Family Tragicomic by Alison Bechdel is a deeply moving memoir about growing up in a family that's hiding damaging secrets.

Relish by Lucy Knisley is a delightful coming of age memoir that includes some delicious recipes.

The MG novels on this list are peopled with brilliant characters.

Root Beer Candy and Other Miracles by Shari Green is a novel in verse. I adore these beautifully flawed characters.

Counting Thyme by Melanie Conklin shows a family in the middle of intense stress while the youngest of them goes through cancer treatment.

Odin's Ravens by K. L. Armstrong isn't my usual fare, but I still enjoyed this fast paced adventure novel based on characters from Norse mythology.

A Tale Dark and Grimm by Adam Gidwitz is the reason I keep participating in this challenge. This Hansel and Gretel retelling is dark, twisted, and hilariously unputdownable.

The Peculiar Haunting of Thelma Bee by Erin Petti was almost to creepy for me. I am pretty sure this is just the first in a series about a girl who discovers that she is more than she thought she was.

Two of these are perfect for younger readers. 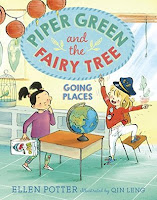 Piper Green from Ellen Potter's Piper Green and the Fairy Tree: Going places, is one of my favourite literary characters for the younger set. Read them with your kids and you will all be happy.

In A Boy Called Bat by by Elana K. Arnold, A young boy on the autism spectrum nurtures a newborn skunk.

I have just started reading The Girl Who Drank the Moon by Kelly Barnhill.

I swear to be on track again by the end of next week.

I planned to read 12 nonfiction titles this year. I'm almost on track here having read seven so far. Plus I have one on the go. I don't think I will finish them all, but we shall see.

These were also fabulous reads. A couple of them broke my heart.

When Breath Becomes Air by Paul Kalanithi was a poignant look into the world of a man dealing with cancer. 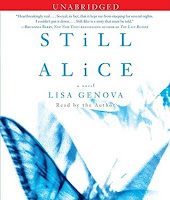 I know that Still Alice by Lisa Genova isn't really non fiction, but it does reveal all kinds of truths about Alzheimer's. Besides, since I have nonfiction on my other shelf, I've left it here. 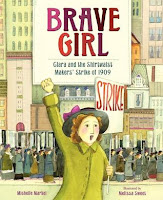 Brave Girl: Clara and the Shirtwaist Makers' Strike of 1909 by Michelle Markel & Melissa Sweet tells the story of union organizer Clara Lemlich. It is a must purchase book for anyone who's raising young activists

I wish I had read The Autistic Brain by Temple Grandin before I was retired. Actually, if you work with other people in any way, you should read this book.

At Home by Bill Bryson looks at how technology and culture have changed and influenced us over time. I have him to thank for the spray bottles of bleach I keep in my kitchen and bathrooms.


I have The Inconvenient Indian by Thomas King on the go right now.

I'm looking forward to reading how the rest of you are doing!
Posted by Cheriee Weichel