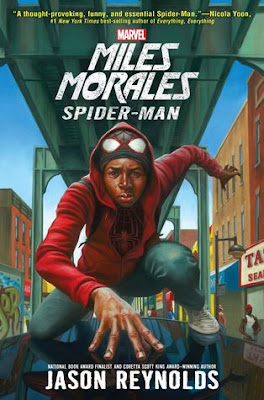 I'm such a fan I would probably pay to read his grocery list.

Thank you Netgalley, for letting me read this book in exchange for an honest review.

Jason Reynolds excels at creating genuine, true to life characters. As you read his words, they come to life seamlessly. You believe they exist beyond the pages of the book. It's this ability that finally allowed me to focus on the story and revel in his writing.

So what the heck was the initial problem? I've been wondering if it had to do with reading on my device. It isn't the first book I've had trouble with there. That light is hard on my aging eyes. And truthfully, I'm easily distracted, so device reading can be deadly. Perhaps I just had too many books on the go. Of course it might be that I had a hard time in the first place because I'm not really a superhero fan.

It was when I finally committed myself and sat down and finished the book that I was blown away. I went back to reread the beginning. After shuffling off my biases and letting myself embrace these characters and the story, I really fell head over tail in love.

At one point I went to Wikipedia to research Spider-Man. (I told you I was easily distracted.) It helped. The last time I paid any attention to superhero comics, was when my sons were reading them. They are now 33 and 36, so that was quite some time ago. I discovered that Miles Morales came onto the scene in 2011. He is an Afro Hispanic teenager with the same abilities as the original Spider-Man. Background knowledge is important.

In this novel, based on that character, Miles, an A student, attends an elite school, Brooklyn Visions Academy, on scholarship. Miles has loving parents who have his back at the same time as they take him to task for any misbehaviour. I appreciate the way Reynolds captures their neighbourhood in an array of beautiful, damaged characters who never really had a chance to fulfill their potential. He shows us that the story of a black skinned Spider-Man can't be told without understanding the context of being black in America.

At school Miles rooms with his Korean American best friend, Ganke. Their relationship is brilliantly, lovingly authentic. Ganke often gets them into some kind of mischief where Miles is forced to use his super powers. Afterwards, his conscience fills him with anxiety and regret. I appreciated Miles' ambivalence and the dilemma he faces over using his special powers. He's conflicted between saving the world and saving himself. He tells Ganke, "to have the time to be a Super Hero, you got to have the rest of your life laid out. You can't be out there saving the world when your neighbourhood ain't even straight. I just got to be real about it."

Miles is lucky to have mostly stellar teachers at school. The one exception is his history teacher, Mr Chamberlain. Mile's spidey-sense is triggered regularly in this class. The racist Mr. Chamberlain is truly creepy. In Ganke's words, "he keeps talking about how the Civil War was like this beautiful, romantic thing.… He was going on about how, depending on how you look at it, slavery was kind of good for the country." There are a lot of important lessons on power relationships, how to engage in activism, resist oppression, and act collectively that emerge from the time spent in that class.

Part of what wowed me in this book was the integration of Sijo poetry. The examples in the book are spectacular, like the one Alicia, Mile's romantic interest, shares in their English class, on the theme of love:

A romantic mountain top view of the world is love for most
Being that close to clouds strips them of form, turns them to fog
Perhaps the real beauty is on the way up, where like it is.

Here's one Miles wrote while thinking about his family.

Miles loved his Uncle Aaron and visited him regularly against his parents' wishes. It was because of Aaron's criminal endeavours that Miles was bitten by the radioactive spider that gave him his powers. Miles' dreams are haunted with the same recurring nightmare: a battle to the death with him. He's terrified that his uncle's taunt, "You're just like me," is true.

At the school's Halloween dance, Miles discovers an insidious conspiracy designed to destroy the lives of black students. He realizes that he is only one of many individuals who have been victimized across time and space. It's up to him, on his own, to stop them.

This is a book I wish I could read out loud to a group of students. I envision many thoughtful conversations about how we use power, about what it means to be a person of colour, about how we can be manipulated by others based on our preconceived assumptions. Writing our own Sijo poems would have to be part of the experience. I expect students will clamour for teachers to read just one more page.

I know of at least a dozen students I would hand this book over to.

The release date for this book is August 1st. You are going to want to preorder a copy and read the book yourself to see how good it is.
Posted by Cheriee Weichel