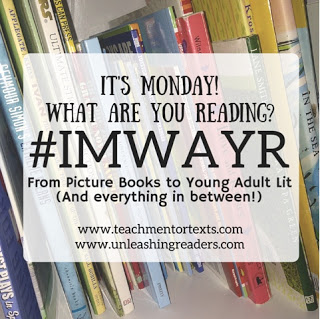 Family from out of town came to visit on Sunday. My partner cooked up a pan of paella. The rest of us created tapas to accompany it. There were pitchers full of sangria. We compared favourite books and solved the problems of the world. Babies were held and passed around. Love abounded.

I'm trying really hard to get back on track with my reading goals for this year. I'm doing pretty good so far with respect to my #MustReadIn 2017 nonfiction titles, but I figure I am at least five or six behind schedule with my #MustReadIn2017 fiction list. I also need to focus on reading Canadian Indigenous authors so I manage to reach my goal of at least 50 titles this year.

But apparently, I don't have enough reading goals in my life and have joined Sue Jackson in the Big Book Challenge. I'll get a post up about this sometime this week.

I planned to read just one book from this series, Amik Loves School. I picked it from Netgalley because of the author. I forgot about it and then it expired from my device. In order to review it, I ended up finding a copy at my library. The next thing I knew, I collected almost all of this series of readers to look at and review. The books feature Anishinaabe children in an urban setting. Each title highlights one of the sacred teachings. If you want to know more, go and read my blog post.

I think I might have enjoyed this second installment in Marjane Satrapi's memoirs more than the first. When my partner worked with an Iranian film maker for a while, we got to know a bit about the Iranian community here in our city, as well as learning a lot about the revolution. It was very interesting to experience that time vicariously through the intimate perspective of a young girl. During the war, Marjane's parents sent her away to school in Austria. When she returned neither she nor Iran were the same. It was fascinating to see the dichotomy between how people acted in the street and what went on behind closed doors.

At Home: A Short History of Private Life by Bill Bryson

When I am asked what kind of gift I want, I often ask for a book that that person loved. My oldest son gave me this last Christmas, so I was eager to read it. I ended up reading some of it with my eyes and listening to other parts.
Bryson takes us through his Victorian parsonage room by room while regaling us with historical details and characters connected to each space. He primarily focuses on British and American reality, although does occasionally wander off into other places. He looks at how technology and culture have changed and influenced us over time. Some parts were more interesting than others. I liked the stories about individual events and people best. One section that stuck with me most profoundly has to do with all the creatures we share our living spaces with. I'm now terrified of flushing the toilet without the lid down. I'm trying to convince my partner that he should do all of his business sitting. I've put bleach in spray bottles in the bathroom and kitchen and spray my toothbrush, my counter tops and dishcloths with it vigilantly. I've replaced pillows. I've turned the mattress. The section on childbirth was pretty horrific too.

This Would Make a Good Story Someday by Dana Alison Levy

After reading Dana Alison Levy's novels about the Family Fletcher, I was excited about this book as soon as I found out about it.
I expected it to be good.
I was right.
A part of me missed that Fletcher crew, but I soon became enamoured with Sara Johnston-Fischer and her family. What a collection of marvelous characters! The story is told through Sarah's journal; postcards written by her youngest sister, Ladybug; notes written by her older sister, Laurel; and ideas penned by one of her mothers, Mimi. This coming of age novel is set on trains travelling across America after Mimi wins a trip for the whole family. The only catch is that she has to write about it, and that, much to Sara's dismay, means she wants them to tell her their thoughts, feelings, and impressions. They travel with another family whose father, another writer, also won a trip.
Levy manages to integrate considerable historical information into this entertaining read. Some of it is revealed in fun facts; others in not so fun facts. It's through the latter that readers are exposed to the darker underbelly of the history.

If you enjoy speculative fiction filled with humour, this might be the book for you. The title pretty much describes the trajectory of the novel. An angel brings Levi, also known as Bif, back to life so that he can write about his time as best friend to Christ, known as Joshua in the novel. Imagine two teen aged boys, one who is the son of God, and the other, his horny best friend, travelling across the far east in search of knowledge as to how to become the messiah. Throw in Demons, Yeti, and plenty of sexual encounters to get a sense of what it is about. I enjoyed it at first, but then some of the humour became redundant, and I wasn't looking forward to the end. I mean, we all know how that story finishes.

I'm listening to Counting Thyme by Melanie Conklin. I really need to get to get back to these two netgalley titles, Zinnia and the Bees by by Danielle Davis and Miles Morales by Jason Reynolds. I keep forgetting about them. I've started reading with my eyes, The Hanging Tree by Ben Aaronovitch, the most recent in the Rivers of London series. I'm having a difficult time because the font is so small and I have old eyes. I need to read with a spotlight on the text.

I will get to Posted by John David Anderson as soon as I have finished The Hanging Tree. I have 4 more audiobooks downloaded and ready to listen to. At least one of them, Do Not Say We Have Nothing is one of my #mustread titles. I just picked up Rose's Run by Dawn Dumont and am not sure how long I can hold out without getting to it. My next nonfiction title will be The Inconvenient Indian: A Curious Account of Native People in North America by Thomas King.