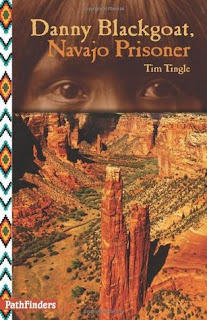 This is not an easy book to read. By the end of chapter two I had to put the book down, not sure if I could continue. Unfortunately, Native American history is all too often dystopian. What Tingle does, is highlight particular aspects of it. In Tingle's How I Became a Ghost, readers are introduced to  the Choctow Trail of Tears. This novel reveals and highlights the brutal treatment of the Navajo at the hands of white people.

In those first two chapters, soldiers arrive at a peaceful community, gather up the people, kill their animals, and burn their hogans, orchards and farms. Then they begin forcing the people to march 300 miles south to Fort Summer.

Danny Blackgoat manages to escape once, but is recaptured. As a consequence, he is tied to the back of a horse and paraded up and down the march as a lesson to the rest of the people. Once they arrived at the Fort, the near dead boy is sent off to work in a prison camp where he is expected to die. Thankfully he makes some friends who protect him from one of the nastier guards.

Based on true details taken from Tingle's research into the Navajo March of 1864, this is not an easy read. Yet ultimately it's a story about the power and determination of one boy and the rest of the Navajo people. It's the kind of book I can see many readers enjoying.