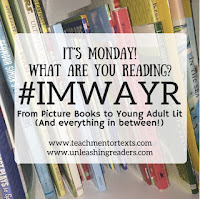 My reading life has been intense. So intense, that I started to feel overwhelmed by the emotional work it required. Then to add to it, I began listening to Barkskins by Annie Proulx. Shortly after starting it, I realized that it was going to take me over the edge so I stopped and dug around in the overdrive section of my local library for something light and fun to balance out my reading life. Hurrah for Sammy Keyes!

This heart wrenching book is very timely. It tells the story of a child separated from her mother due to legal issues. Her mother is in detention because she doesn't have the proper papers to live in America with her husband and child. All the many letters her father writes to officials don't seem to make a difference. Staub's bold illustrations portray the character's emotions both in their faces and in the background details. Danticat's text is filled with beautiful phrases. "Sometimes the stories are as sad as melted ice cream. Other times they are as happy as a whole day at the beach."

A baby is born and spirits of the earth welcome it. Each brings it's own gift for the baby. Right from the start, Kalluk's words are beautiful to read, "Sweetest Kulu, on the day you were born, all of the Arctic Summer was there to greet you. Smiling sun shone so bright and stayed through the night, giving you blankets and ribbons of warm light." The rhyming scheme doesn't continue, but there is a pattern in the language that keeps the text moving along. Neonakis' illustrations have a disney feel to them, but they are rich and beautiful in their symbolic portrayal of these animal spirits. Together these two highlight a culture's intimate relationship to the land. This would make a lovely baby gift.

A while ago I discovered The Wollstonecraft Detective Agency series written by Jordan Stratford, a BC writer. The Goodreads description explains, "Jordan Stratford imagines an alternate 1826, where Ada Lovelace (the world’s first computer programmer) and Mary Shelley (author of Frankenstein) meet as girls and form a secret detective agency!" I already knew a bit about Mary Shelley, but I've wanted to know more about the real Ada Lovelace ever since.

I enjoyed both of the following books for many reasons. Both are filled with details about Ada Lovelace's life. They tell us about her early life at home without her father, Lord Byron. We learn that she was taught mathematics and science from an early age. She combined this knowledge creatively to come up with an idea to create wings that would enable her to fly. At the age of 16 she was introduced to society and began a lifelong friendship with Charles Babbage, a mathematician. Together they designed the Difference Engine and the Analytical Engine. Both are precursors to modern day computers.

Diane Stanley shows us the process of Ada's scientific thinking: first imagining flying, next researching the flight and anatomy of birds, then the creation of wings, finally sharing her work in a book about this project, and how her plans for a steam-powered flying horse emerged from this process. The text is loaded with this kind of explicit information. Jessie Hartland's illustrations are filled with many details that compound the reader's understanding of the text. Additional material about about the industrial revolution is revealed in these images. They capture the contrast between Ada's parents, and the world of society and the world of scientists. I was especially struck by the illustration showing Lovelace's marriage - she doesn't look very happy! Hartland's images reveal how Lovelace understood the implications of Babbage's work more than he did, and show how their work is integrated into our daily lives. I appreciate the extensive notes, the bibliography, and the glossary in the end matter.

Fiona Robinson's three dimensional images are gorgeous. I also love these end papers that show the punch cards Ada created to run her program. They reminded me of those cards I punched while attending university (many years ago) when computers first became available. I appreciated the details of Ada's early life that show her daily schedule and reveal how lonely she was. Readers learn that when she was ill with measles, (something we thankfully have vaccines for today) it took her three years to recover. I appreciated that Robinson explained how the everyday use of the Difference Engine could change people's lives. I was fascinated by her illustration depicting Lovelace's programing of Bernoulli numbers. The end matter includes a bibliography and a note about Bernoulli numbers.

I highly recommend libraries purchase copies of both these books!

Squirrel Girl has just started college and discovers that keeping her identity secret, partnering up with another secret hero, and focusing on her studies is going to be a lot more challenging than she anticipated. This book is loaded with goofiness, but that just makes it more fun to read. I appreciated Erica Henderson's depiction of Squirrel Girl as an almost ordinary shaped young woman. (After all, she's got that tale to deal with)
I've been wondering if I had read the comic books before reading Shannon & Dean Hale's text based prequel to these, would I have looked at them more favourably. The answer is, probably, but I'm not sure.

Gifts is set in an alternate reality where different clans are separated by the different special powers handed down through the generations. "Wondrous gifts: the ability--with a glance, a gesture, a word--to summon animals, bring forth fire, move the land. Fearsome gifts: They can twist a limb, chain a mind, inflict a wasting illness." The different communities fear that another community will unleash their power on them. This novel focuses on two teens who decide to not use their power.

I needed a Sammy Keyes fix this week. If you are not acquainted with her, she is a modern day Nancy Drew. While spending time with friends out in the country, Sammy and her buddies befriend an older woman, Lucinda Huntley, and Penny, her 200 pound pet pig. When a fire burns down an historical monument connected to one of Lucinda's ancestors, Sammy and her friends end up investigating. Van Draanen brings important social issues into each novel. This time she looks at the issue of elder abuse, illegal drug production, and the complicated activities of teenagers at house parties. Tara Sands narration has become the voice of Sammy Keyes for me.

Last week, since my library copy had to be returned, I purchased my own copy of Do Not Say We Have Nothing by Madeleine Thien. It is not a book to rush through. I'm reading it in chunks and savouring each word. I made serious headway with Spin: How Politics Has the Power to Turn Marketing on Its Head, but it is dense and I find myself rereading sections and trying to figure out how what Veroni reveals about the political situation prior to 2014 relates to what is going on now, both in America and here in BC where we are leading up to another provincial election. As a contrast to those two intense books I started reading a netgalley title, The Mesmerist by Ronald L. Smith, and am listening to my second Sammy Keyes novel, Sammy Keyes and the Runaway Elf.

UP NEXT
I'm planning on starting Catching a Storyfish by Janice N. Harrington. I'm especially looking forward to reading the original and new version of Dragonfly Kites, the second in Tomson Highway's trilogy of life in the north.