#IMWAYR is here again. Hurrah! It's time to share what you have been reading in the past week and find out what other readers have been up to. The adult version of this meme is hosted by Kathryn at Book Date. The kidlit rendition is hosted by Jen at Teach Mentor Texts and Kellee and Ricki at Unleashing Readers. Whatever you are looking forward to in your next great read, these are fabulous places to start your search. 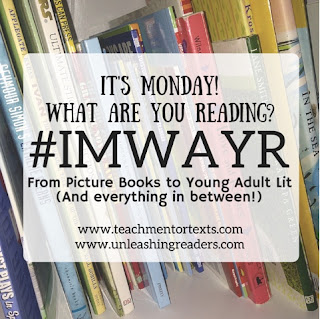 Now that was a glorious reading week. I abandoned housework, sewing, gardening and other inconsequential things to laze around and read. Ok, all those audiobooks reflect that I managed to get in some long walks and do some cooking. We had two birthday celebrations last week so there were cakes to bake. I also scrabbled out a bit of time to do some writing. I need to set up a schedule so I am more consistent about this, but honestly, I am revelling in the fact that I don't have to have a schedule. I'm sure that eventually I will get bored by this, but in the mean time...

Drowning is Inevitable by Shalanda Stanley

Fluffy Strikes Back by Ashley Spires

This is a NetGalley title that expired while I was busy grieving for my mother earlier this year. I found the book in our local library and read it because the idea of it appealed to me so much (and I have to get caught up with all these books) I enjoyed this story of four damaged teens trying to support each other after a tragic incident forces them to flee from their small town and the police. They make some questionable choices, but we can see how these were inevitable. There is just so much authentic love, heartbreak and growth for the characters in this book. I wept buckets.

I have no idea who introduced me to this series, but after just one book, I've fallen hard. I love how smart and witty the writing is. It's reminiscent of American Gods and Skullduggery Pleasant. Peter Grant is a young constable just starting out in the Metropolitan Police Service in London, England. One evening while guarding a murder scene with another new constable, Leslie May, a ghost appears to him to tell him what he saw.  When he returns to the crime scene in hopes of interviewing the ghost again, he meets up with Chief Inspector Nightingale. Instead of ending up trapped in a position doing paperwork so real coppers don't have to, Peter ends up as apprentice wizard to Nightingale. I'm anxious to get to the next book in this series.

I love, love, love this series. That Mlynowski is a Canadian author, just adds to my pleasure. If you haven't read anything by this team of writers you need to remedy this. Last spring I convinced the teacher of a classroom of learners with language processing issues, to read the first in the series, Upside Down Magic. They loved it, and he came asking if there was a sequel. I think I will purchase a copy of this for him. It tells the story of a group of students in a special class for kids who have magic outside the realm of what is normal.

Stars So Sweet by Tara Dairman

I fell in love with Gladys Gatsby, kid chef and restaurant critic in All Four Stars. In this installment, Gladys is trying to balance her cooking life with after school clubs, homework, and friends as well as helping out her favourite aunt. Somehow I missed the second in this series, but it didn't seem to make a difference in my enjoyment and understanding of this one. (Of course, when I discovered that the second was a available at a nearby library, I went for a walk and picked it up.)

Miss Penelope Lumley has her hands full when the family heads off to Brighton so that the pregnant Lady Ashton can get some sea air. Lord Ashton wants her to find someway to erase the curse on him so that the child can grow up normal. The Babushkinov family, with children wilder than the Incorrigible children, are also spending time in Brighton. Nothing good can come of it. I adore this series, but have to admit that this ending devastated me!

Mori, and her friends, Theo, Benji, and Julia, live on Firefly Lane in the utopian community of Old Harmonie. Their lives are pretty much idyllic until a family with a daughter, Ilana, move in. Ilana is oddly perfect, but Mori still connects and befriends her. This creates conflict with Julie who is suspicious of Ilana. Then Mori and Theo uncover some uncomfortable secrets about Ilana's background; secrets that shed light on their own realities. Like all of Blakemore's titles, Firefly Code is a tale that presents her characters and readers with all kinds of ethical dilemmas. It is interesting to see how a community that starts out with the best of intentions can get sidetracked by a corporate agenda. I'm looking forward to the sequel.
PICTURE BOOKS
Ida Always by Caron Levis & Charles Santoso (illustrator) 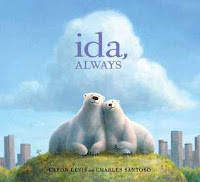 There has been a lot positive buzz about this book, but honestly, I'm conflicted as heck about it. On the one hand I see that it is a beautifully illustrated, powerful book about loss and grief. On the other, I'm distressed that polar bears, who migrate hundreds of kilometres in a yearly migration, are confined to a compound in a zoo, irrespective of how large and comfortable we think it is. Further reading about the real life of these magnificent creatures, Gus and Ida, just depressed me more. (Did you know that Gus was put on prozac for neurotic behaviour because of his environment?) On top of all this, here we are getting mushy about a couple of zoo bears all the while ignoring the fact that we are driving polar bears to the brink of extinction as we contribute to global warming. Sorry. I'll stop ranting now. 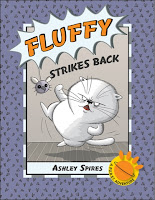 It's Ashley Spires, a local author and illustrator, who is creator of the Binky series and The Most Magnificent Thing as well as many other picture books. She's the person behind those wonderful images in Spare Dog Parts. In this, our hero is Sergeant Fluffy Vandermere, head of P.U.R.S.T (Pets of the Universe Ready for Space Travel) His job is to protect the world from alien domination (bugs.) It's hilarious and clever. If you still need to find out more, check out my full review.

I'm trying to finish Dead Boy by Laurel Gale. (another Netgalley title I didn't get to in time) It's a hard slog. I even went and read the end in hopes of being motivated to read more.  I'm about 1/4 into See How They Run by Ally Carter, but I'm not enjoying that either. There is too much poor pitiful me angst in it. I may end up abandoning both of these. Sigh.

The Seventh Wish by Messner, Kate, Summerlost by Ally Condie, and Every Single Second by Tricia Springstubb are due back to the library in a few days, so I have to get them read soon. I've got Moon Over Soho, the second Peter Grant series by Ben Aaronovitch ready to listen to as soon as I finish or abandon See How they Run.
Posted by Cheriee Weichel