Gertie's Leap To Greatness by Kate Beasley & illustrated by JillianTamaki 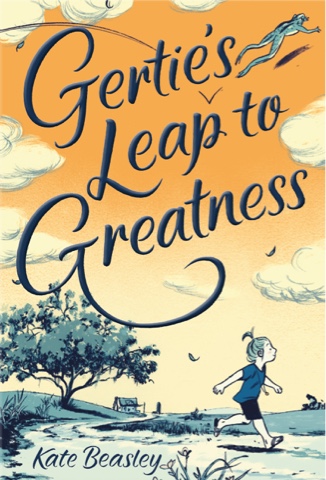 I declare this book is going to become a classic!

Gertie Reece Foy is a fabulous character - one part Junie B Jones, and another part Moses Lebeau of Tupelo Landing. She has determination, grit and stamina. Kate Beasley has done a magnificent job introducing her to us.

"Gertie had brown hair which she wore in a ponytail that stuck straight out of the top of her head, which encouraged blood flow to her brain, which made her have lots of ideas. She also had a big nose and pointy chin. She had freckles on her face and she had elbows halfway down her arms. As always she looked exactly like herself.... Her father liked to say that she was a bulldog with its jaws locked on a car tire."

She lives with her great Aunt Rae and father who works on an oil rig and alternates between being home and being away.

Right off the bat we realize that Gertie is no ordinary kid.

"The bullfrog was only half dead, which was perfect." Gertie resuscitated him by forcing oxygen into its lungs with a turkey baster. This monstrosity of science was created so that Gertie would have something extraordinary to talk about in her speech for the first day of school.

This is because, Gertie wants, more than anything, to show her estranged mother that she, Gertie, is an important person. It's this need that is her tragic flaw and gets her into so much trouble.

Right off the bat, trouble, in the name of Mary Sue Spivey, a new girl, and soon to be Gertie's arch nemesis, gets in the way of Gertie accomplishing this task.

Everything goes from bad to worse, until finally, Gertie figures out what is really important.

This book reminded me a lot of Sheila Turnage's Tupelo Landing series. Fans of that series are sure to love Gertie.
Posted by Cheriee Weichel