Neil Flambé and the Marco Polo Murders by Kevin Sylvester 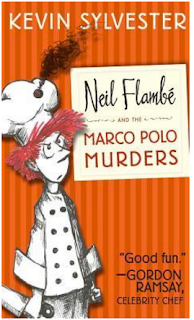 Gourmet cooking, murder, history, humour, and hints of romance come together in this first mystery in a series starring a precocious 14 year old chef, Neil Flambé. He has a super sensitive nose that can detect molecules of odours the rest of us are oblivious to. When renowned Vancouver chefs are being murdered by a serial killer, Neil is called in to help Police Inspector Sean Nakamura figure out what poisoned them. Pretty soon the clues start pointing to Neil himself.

I started this book because I had heard good things about it and found three new copies of the series discounted in a second hand book shop. I figured I better read at least the first so I could encourage my readers to have a go at them.

I continued reading because it is a great story. Neil has many of the qualities of gifted kids I've met over the years. He doesn't have many social skills and his passion for food and cooking, not to mention his over sized ego, prove to be a barrier in his acquiring any. His parents have little to do with him except to fund his restaurant, but luckily he has had a great mentor in semi-retired chef, Angel Jicama, who attempted to teach him cooking at the same time as trying, unsuccessfully, to encourage Neil into a more emotionally healthy attitude. In spite of all his quirkiness, I found myself getting attached to this flawed main character. I also came to admire Larry, Neil's older cousin, who is more charming, sensible and smarter than Neil has figured out. One reason I enjoyed this book is that it is set in my city, Vancouver, BC. There is something special about being able to make a personal connection to places mentioned in a book. In addition to all this, there was enough suspense, action, and shenanigans in the plot to keep me hooked till the end.

You would think this would be enough, but I can't leave without mentioning the illustrations which are a delight to look at all by themselves. See what I mean? 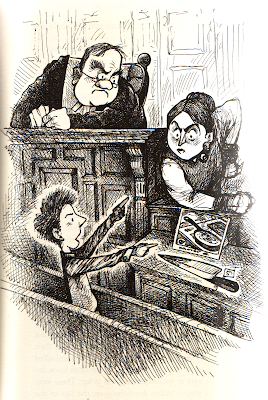 This will be a book to hand over to students who enjoyed All Four Stars by Tara Dairman. Even though there are no recipes included, I'll definitely be reading more of this series.