From Lands of the Night by Tololwa M. Mollel & Darrell McCalla (Illustrator) 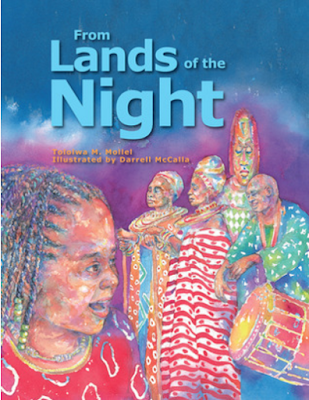 Ra-Eli's baby brother, Samson, was very ill. The family took him from hospital to hospital but he continued to worsen. Eventually they took him to a healer. They were told to hold a joyful ceremony to call their ancestors, as only they could heal the boy.

And so they did. The ceremony included drums, singing, dancing and plenty of food and drink. Their yard was filled with many guests from all over.

When it became dark, strange looking creatures arrived from the land of the night. An angel who claimed to have come from Mola (God) followed them. Her message was that Mola was not happy and wanted the party to stop. The music was too loud and he couldn’t rest or think.

The angel was encouraged to come and partake and, reluctantly at first, acquiesced. Other angels arrived and were pulled into the music and dancing.  Eventually even Mola arrived.

At midnight, the ancestors finally showed up, dressed in ornate clothing and headdresses. Both of the girl's parents addressed them, asking for their help.

What I liked about this book.

Mollel's first line threw me into this story of magical healing. "One day he was well. The next he had grown ill - very ill." Following this, his writing and McCalla's gorgeous illustrations kept me as joyfully captivated by his tale, as guests from other realms were drawn to the celebration itself.

That the family calls on many deities to help them, is both specific to Mollel's Tanzanian heritage, as well as universal, in that when times are dire, we all tend to call upon whatever forces we might believe might be there for us.

I appreciated the author's note at the end where Mollel explains the beliefs in this story more fully, and how these melded mystical beings are integrated into his Tanzanian culture, as well as other African countries and places like Brazil and Haiti. After a bit of research, I discovered at CanLit for Little Canadians, that Darrell McCalla, the illustrator, is from Haiti. His vibrant illustrations enhance the global connections in this story.