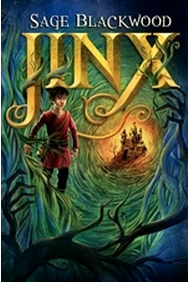 Jinx has been on my must read list for two years. I'm so glad I got around to finishing this beautiful coming of age fairytale.

At the age of five, Jinx's stepfather took him into a forest where he planned to abandon him (in Hansel and Gretel fashion) to the dangers of the Urwald, a forest rife with werewolves, trolls, and numerous other dangerous creatures. Simon Magus, a wizard who may or may not be evil, rescued him and eventually Jinx became his apprentice.

Their relationship is complicated. While Simon cares for him, he doesn't take Jinx seriously. Like many adult child relationships, Simon assumes he knows what is best for Jinx. Unfortunately, Simon seems incapable of understanding who Jinx really is, or accepting that Jinx has his own special kind of magical power. Jinx can listen to the trees in the Urwald, and see auras that help him understand what people are thinking. Then Simon, acting in what he thinks is Jinx's best interests, removes part of Jinx's power.

Feeling betrayed, Jinx set off on his own to get his power back. Along the way he met up with two other travellers, Elfwyn, a girl in a red hooded cape, and Reven, a well bred young man new to the Urwald. Both are burdened with their own curses. The three of them join forces to find a way to free themselves. Elfwyn's grandmother, a powerful witch, sends them off to find an evil sorcerer, the Bonemaster. He captures them and holds them prisoner hoping to lure Simon Magus into a trap while rescuing them. While they wait, the children come up with a plan of their own.

I enjoyed this story of uneasy friendship between these three children who have all been damaged by their families. Still, I admit that there were aspects that didn't quite work for me. For example, I don't understand how the children could have any trust at all that the Bonemaster was unaware of their plotting against him.

Like all good fairytales, Jinx reflects who we are as a people right back at us. The Urwald is one of the most satisfying enchanted forests I've come across in my reading life in a while. It's a beautifully terrifying metaphor for how dangerous the world can be, should we step away from generally agreed upon norms. I'm looking forward to reading more by this author.