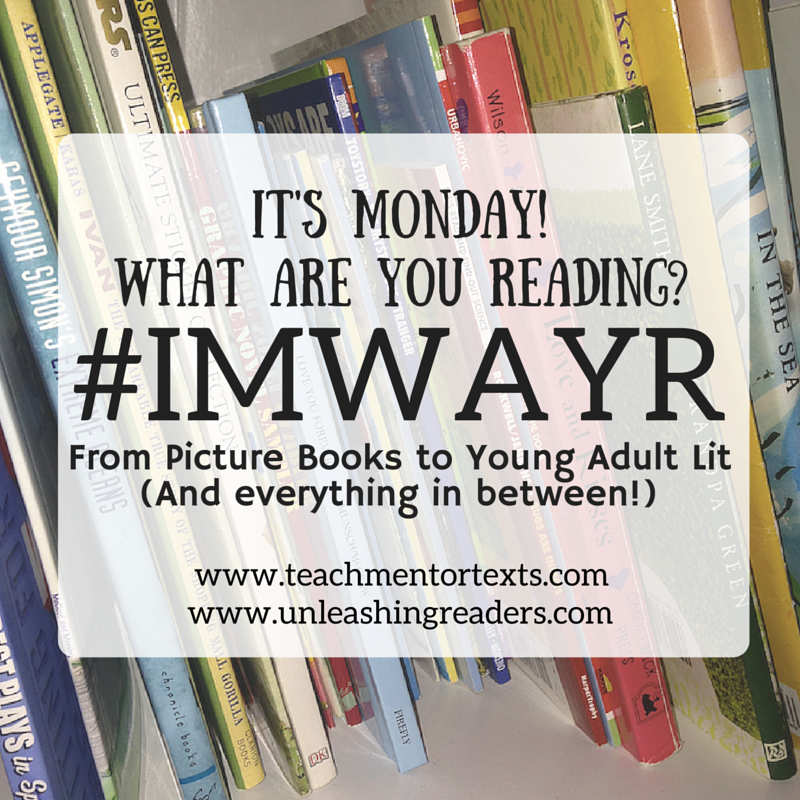 Hurrah it's Monday! I'm looking forward to checking in with dedicated bloggers who are aficionados of children's literature. You can join the fun by checking out Jen at Teach Mentor Texts, and Kellee andRickie from Unleashing Readers, our hosts for this weekly event.

It's been two weeks since my last post. Last weekend we moved. Well, we partly moved. We are living in our new place while we figure out what to do with the 'stuff' we left at our other one. Our new place is crowded with piles of unpacked boxes. Partly it is because we need more cupboards and book shelves. Partly it is because my partner decided to refinish the shelving unit he built when we were much younger than we are now. Thankfully I convinced him that they were not that bad so he is only refinishing the piece he started.

It has been a relief to get away from the mess at home and return to work where boxes full of new books wait for me. I've been limiting my reading of them so I can actually find time to do other work. Still, I have come to the sorry conclusion that I will never get the library under control.

Here is what I have been reading.

This is a beautiful book about a young writer. I enjoyed Rufus' stories and think the illustrations are luscious. Rufus sets up a story stand instead of a lemonade stand. He writes four stories in exchange for 'gifts' from his clients. My favorite stories include Orange is the Best Color and Annie and the Dancing Teapot. I'm looking forward to reading this to children, but think teachers will get more mileage out of it in their classrooms working with young writers.

This is a sweet book that shows how one person can start a movement that makes the world a better place for all of them. I love the gorgeous illustrations and the sparse powerful text.

My Dog Is the Best by Laurie Ann Thompson & Paul Schmid (illustrator)
I am enchanted by this charming little book. If you just read the text, you will see how much this young boy loves his dog. It's in the pairing of Paul Schmid's illustrations with them that makes the reader smile. As the boy tells us about his dog, we discover that his dog isn't exactly as his words would suggest.

As someone with arachnophobia, I liked this book. I still don't love spiders, but I'm coming to some kind of truce with them, so long as they stay out doors. This book is full of information about spiders and it is written in such a humorous voice that I'm certain other readers, whether they love spiders or not, will enjoy this one. This book just arrived in our school library. I'm trying to like spiders, but, as fun as it is, it isn't helping me.

This is a story of a family that, due to financial difficulty, has to move from their house into a small apartment. It is heartbreaking to experience the sale of their possessions through the perspective of Callie, the young girl. Her confusion and sorrow resonated powerfully with me.

This is one of those books that requires a couple of readings I think. On the surface it's the story of a girl who lives in a land where eventually everyone gets their own monster. She waits and worries that she isn't good enough to have a monster. She waits until eventually, gets tired of waiting and heads off in search of her monster.  I really need to read this one again.

The Bear Ate Your Sandwich by Julia Sarcone-Roach

Love this story of the bear that just happened to end up in a city and ended up eating someone's sandwich, or did he? I was delighted by the surprise ending!

I've read this book three times since I took it out of the box on Friday. I read it at work and knew I had to take it home for another read. I read it last night and again today. Each time I take more away from this gorgeously illustrated wordless book. I adore how in the beginning of the book, the black and white illustrations are punctuated with sparks of colour. At first it is primarily the girl's red jacket. Then as as the story progresses there are more splashes of colour in the city and the flowers. As it continues and the girl begins to give the flowers away, the world becomes more and more glorious. The page spread where she stops to put a flower on the dead bird while the father continues ahead talking on his phone, is achingly tender and poignant.

I wanted to like this book. I really did. Ever since I read The Mob by Clem Martini, I've been fascinated by the idea of corvids having a rich history and mythology. So I was prepared to embrace the concept of a magical bond between ravens and humans. I did at first, but somewhere in the execution of this tale, it all fell apart for me. I kept thinking that either there was something wrong with my audiobook, or that my overdrive app was going wonky. I kept losing chunks of text and then suddenly it seemed like these missing bits showed up at odd times later on. On top of this, I thought I had back tracked or something, but hadn't. It was just that the text was so similar, it seemed like it had. All that aside, I quite liked the characters of the four children. I only wish they had been developed more fully. I suppose this will happen in the sequel. I doubt I'll read it though.

This is another story where someone dies, but there is so much more going on than just a character dealing with it.
Danielle was babysitting five year old Humphrey when he ran into traffic and died. Her coming to grips with her grief and responsibility is a large chunk of what this book is about, but it's also about Humphrey and who he was. It's impossible not to love this remarkable little person.
All of this would make for a great read, but what makes the book exceptional is how different members of the community use the tragedy to further their own agendas. There is the group that wants trees cut down, sidewalks laid out and streetlights put up. When it turns out that the car that hit Humphrey was driven by an undocumented immigrant, a group wants to use this to force the police to automatically report such people to ICE. It's in the complex exploration of all this, as well as Danielle's personal encounters with old friends and new, that make this book a compelling read.
This has been on my to read list for a couple of years. I made certain to get to it this year because all of my readers have sung it's praises. They were not wrong.

Simon vs. the Homo Sapiens Agenda by Becky Albertali narrated by Michael Crouch

This book is worth all the praise that has been sung about it. On the one hand it is a coming out and coming of age story. It's a story about friendship and family. I appreciate how masterfully the characters are developed. There are no real bad guys, and even the one who did the most terrible things seems to be redeemable by the end. I also appreciated how sensible and authentic the parents and teachers of these teens are portrayed. There is a sweetness to this book that left me completely satisfied.

Currently I'm reading (and expect to be finished Sunday night), A Tangle of Knots by Lisa Graff. I've started listening to Thirteen Reasons Why by Jay Asher. It is being passed around by my grade 7's so I decided I better see what it is about.

Up Next? More from my 2015 must read list. I'm planning on posting an update at the end of the month!
Posted by Cheriee Weichel