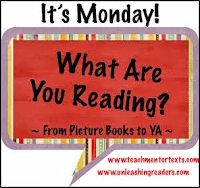 I'm happy to be back participating in #IMWAYR hosted by Jen From Mentor Texts and Kellee and Rickie from Unleashing Readers. Check out their links to find what readers of children's literature have been up to in the last week.

Aside from my reading life, it's been an exciting couple of weeks for me. I've been going through stuff to decide what to keep and what to toss as we pack up our house in preparation for moving to a new place in September. Then there have been all those wedding details to finalize. Last week I took a break from it all to embark on a cruise to Alaska with my mother and siblings. It was bittersweet as the trip was a gift of making memories, since Mom is ill with cancer and has limited time with us. The scenery was spectacular. The rate at which the glaciers are receding was truly dismaying. (I'm aware of the irony of travelling to see glaciers before they are gone at the same time as contributing to their demise by coming to see them)

Here is what I've been reading these past two weeks.

I listened to this one because we have the book at the library and I need to know what it is about so I can refer it to readers. I was pleasantly surprised by this story of mice who flee from a pet shop where they have been raised to be fed to other animals.
After escaping, two siblings, Pinkie and Hopper, are swept up in a rush of water and end up separated in the subway tunnels of Brooklyn. Hopper is saved by a rat named Zucker, who just happens to be Prince of Atlantia, an underground kingdom where an uneasy peace is maintained between Rats and Cats.
This is a book with interesting characters, suspense, subterfuge, betrayal, and battles aplenty.
I'm looking forward to encouraging readers to check this one out!

Sabriel, an 18 year old girl, inhabits a world that is separated into two parallel realities. Ancelstierre, is a more modern place with technology. The Old Kingdom is a place filled with magic. A wall separates these two places, but on occasion, magic spills across the wall into Ancelstierre. When Sabriel is forced to take on her father's mantle as Abhorsen, a magical personage whose role is to put the dead to rest, she heads off into The Old Kingdom to find him and try to bring him back to the living.
On the way, she has to battle numerous evil undead creatures. Ultimately, her task is to find Kerrigor, the most powerful necromancer ever, and defeat him, or at the very least, curtail his power. Along her journey she connects up with Mogget and Touchstone.
This book has some very fine writing. The scenes with Sabriel trekking across the brutal winter landscapes had me wanting to put on a coat and mittens in the midst of hot summer.
I wanted to like this book more than I did, but that is probably because I am not generally a fan of this kind of literature. It was still an exciting read. I can see that fans of high fantasy will appreciate this dark adventure. It has battles aplenty, and even a bit of romance.

I enjoyed this cheeky story about a plucky governess, Penelope Lumley, who heads off into the unknown to work with a passel of children who have, until recently, been raised by wolves. This is a hilarious romp which juxtaposes Victorian society and manners with the antics of children who are nearly still wild. There is a bit of a tease at the end as we never really find out what the mysterious howling is all about. (although there are clues) In spite of this, the ending is satisfying. Katherine Kellgren's  narration was the perfect voice for this. The only thing wrong with listening to this book is missing Jon Klassen's illustrations. I'm looking forward to the next in this series.

The Penderwicks on Gardam Street by Jeanne Birdsall (audiobook)

I love the Penderwick family! This story is delightful as Mr Penderwick, much to the dismay of his daughters, begins to date again. I love that it is filled with humour, trouble, and romance.

This story filled my ears while walking laps on the cruise ship trying to stave off gaining more pounds than I might otherwise. It is an enjoyable read. I liked the connections to Norse mythology and the premise that we need not replicate the mistakes of our elders. I can see why my readers enjoy this tale. It's filled with strong characters who work together. There is is action and excitement. I know that some readers like this kind of ending, but I am not a fan of stories that don't really finish up the story and end on a cliffhanger.

More Happy Than Not by Adam Silvera

I adored this book. I love the characters. I appreciated that although I was forced by circumstances to read this book over a longer period of time, the story wouldn't let go of me and haunted me with questions long after it was done. I'll be getting this one for our grade seven shelf.

In spite of the fact that I have some reservations, I enjoyed this story of a girl and her brother who are homeless. I was not particularly impressed by Gage, who took Arianna, his eleven year old sister, from a safe environment into a life of homelessness. Seriously? What kind of brother would do this? They were lucky to have an easy way out of their predicament but I appreciate that readers get a glimpse into what it might be like for people who don't have that opportunity.

There is a sweetness to the idea of this book - learning how to grieve and move on from those who have lived it. I wanted to like it. Unfortunately, it doesn't quite work for me. I kept trying to place this book in some time frame and couldn't, and this frustrated me. The writing feels stilted and these characters and their interactions, aren't quite authentic.

For the Right to Learn: Malala Yousafzai's Story by Rebecca Langston-George (netgalley)

While there are some promising aspects to this book, I didn't like the illustrations. I won't purchase a copy for our library as there are better titles out there that address Malala's story.

I'm not sure where the idea to read this one came from, but whoever you are, I thank you for it. This is a powerful story that explores the complexity of what it means to be evil. It's a book that hints at all kinds of relationships between the characters. Nimona, a shapeshifter, becomes the sidekick to Ballister Blackheart, a super villain with ethics and rules. Blackheart is the archnemesis of Sir Ambrosius, a Knight of questionable character, who works for the Institution of Law Enforcement and Heroics, a corrupt organization with a sinister plan to destroy the world.
Nimona is a complex character who seems to be out of control as often as not. Is she a young girl who transforms into a monster, or a monster posing as a young girl? It gets very complicated when Nimona and Blackheart come up with a plan to eliminate the Institution.


On one level this is a fabulous, at times humorous, adventure that combines magic and science fiction. On another, it's an allegory revealing a world view wherein young girls and women must be controlled or they are dangerous creatures. I'm glad Nimona escaped this fate.

My only complaint about this book is that the text is so small I had to put my reading glasses on. Even then it was a challenge for my old eyes.

Up Next
I'm working my way through my must read list and the rest of the box of books I brought home from school to read.
Posted by Cheriee Weichel