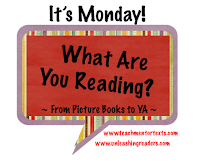 Here we are, it's Monday again, my favourite day of the week. Time to check in with hosts Jen From Mentor Texts and Kellee andRickie from Unleashing Readers, to find out what bloggers around the world are reading this week.

In spite of having to go in and do some clean up in the library, I've managed to get in a lot of glorious reading this week. I even managed to get my #MustReadin2105 update post up!

I'm just loving this series. I'm not sure what genre you would fit this into. It's paranormal, steampunk, and mystery, with a satisfying dash of humour. Carriger's world is filled with werewolves and vampires mingling together with regular humans. And there are robotics. Sophronia, our heroine, is a rambunctious girl who's been sent off to finishing school. Only it isn't the sort of finishing school she is anticipating. Learning how to behave in polite society is only part of the curriculum. Learning how to kill using different methods is another. Having read some of Carriger's adult novels set in the same world, it was easy for me to transition into this setting. I'm not sure if it will be as easy for new inductees. However, I am most definitely getting this series for our library. I can think of a whole mess of readers who will enjoy this as much as I do.

Glory O'Brien's History of the Future by A.S. King

I liked this book a lot, but not as much as Ask The Passengers.  While in general it worked for me, I just couldn't suspend belief and accept that women could actually be outlawed from working in the United States. I know that the struggle for equality for all people is never ending, but doesn't the constitution protect all citizens from this kind of segregation? Anyway, other than that, I did enjoy the book. I connected to the characters and ached for all of them.

I am charmed by everything Kate DiCamillo writes. Her partnership with Chris Van Dusen in their collection of companion books about Deckawoo Drive, are no exception. You can read more of my thoughts on this book by clicking on the title link above.

I got this as a free download from audiosync. It isn't the kind of story I expected to like as much as I did. But I did. I came to care about Shy and his friends. If the next book in the series was available as an audiobook from our local library, I might have gone on to it. As it is, I had to put it on hold. This dystopian novel is one I'll get for our library.

This is the story of three young Irish girls who are forced to deal with the loss of their mother, who has disappeared. Rumours abound that their mother is a selkie who has returned to the sea. While their father sinks into a depression, Cordie, the eldest, does her best to hold the family together. In the process, she gets tangled up in the stories she tells to her younger sister about a kingdom of selkies living on a hidden island just off the coast. I'm a fan of magical realism anyway, but I enjoyed this middle grade novel more than I expected. I had a hard time dealing with the actual solution that emerges about why their mother disappeared, but the read is still worth it.

Channing O'Banning and the Turquoise Trail by Angela Spady (netgalley)


I like much of this chapter book.  I found Channing herself to be a delightful character. She is a budding artist who keeps a drawing pencil in her hair and her sketchbook at the ready. The squabbling between her and her older sister feels authentic.
In this book in the series, Channing and her family head off to Arizona for a wedding. While they are there, they learn about the Native Americans who live/d there.
Unfortunately, I have a couple of issues with this story.
First, Channing ends up helping Lusita, a Zuni artist, create a wedding pot. it seems that as soon as they finish it, they put it into the kiln. Unless clay has changed a lot since my day, you don't put green (wet clay) into the kiln unless you want a disaster on your hands. So the notion that they could have this ready within a day or two to give away as a wedding gift is impossible.
Second, on page 80, while the family are readying to explore a mine for turquoise, they watch a video called, The History of Turquoise. It shows "pictures of fancy turquoise jewelry worn by Zuni and Hopi princesses." While I am no expert on Native American culture, I think that this kind of social attribution is a European construct that has nothing to do with authentic Zuni social structure. It shouldn't be there in a book that ostensibly introduces young readers to different places and peoples.

I was worried at first by the nasty bullying that went on in this book. (I am also dismayed that teachers could be so darn oblivious to it all) Eventually I was won over by Apple and her determination to become a musician. I just love Evan, the new boy from California. I think there are more Evan's in the world than this book would have us believe, but maybe we just don't get to know them.


The Art of Asking by Amanda Palmer

I went into this book blind so to speak, with no knowledge of who Amanda Palmer is. I'm sure glad I read it and discovered her. I love her honesty and her ability to put herself out there.  I've always believed that if rules assert that you shouldn't talk about something, then you should absolutely talk about it. Amanda, for the most part, is this kind of person also. I'm thankful that reading this book got me examining my own reticence to ask for what I need in some situations. In addition, Palmer's journey into the world of social media and crowd funding was enlightening. I'm in awe of her ability to navigate it. I certainly don't have the energy or inclination for it.

The Faceless Ones (Skulduggery Pleasant # 3) by Derek Landy

While we've been away working on our house in Oliver, a small town I grew up in, I've started in on a Skulduggery Pleasant listening binge.  In this one in the series, Valkyrie, Skulduggery and Tanith have to deal with someone killing off transporters. Eventually they find out that whoever is behind it wants to open a portal to let The Faceless Ones through into our world. It's up to Valkyrie, Skulduggery, Tanith, and a young transporter named Fletcher, to stop them and save earth as we know it.

Currently I'm listening to Dark Days (Skulduggery Pleasant # 4.) I started reading The Red Bicycle by Jude Isabella, but company arrived. Up next I've got two library books, The Letter Q edited by Sarah Moon, and The World on a Plate, by Mina Holland due back to the library July 8th, so I'll be focusing on them.
Happy reading to everyone this coming week.
Posted by Cheriee Weichel