The Entirely True Story of the Unbelievable FIB by Adam Shaughnessy 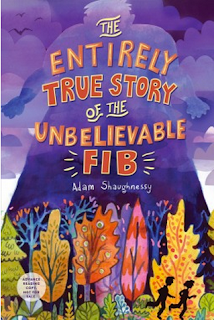 What if you woke up one morning to discover that a strange envelope, with a postcard inside, had been slipped under your bedroom door? If you bothered to open it, you would find that:

On the one side it said,


Be grave in your search,
and avoid having stones in your head.


And on the other, written in gold lettering,

WHAT IS THE UNBELIEVABLE FIB?

If you, like Prudence (Pru) Potts, want to be a detective, you are compelled to figure out what is going on. And so begins a thrilling and mysterious adventure for Pru, her new friend ABE, and you the reader.
Strange things are happening in the little town of Middleton. Nothing is quite as it seems. The weather with it's dark and gloomy skies is punctuated with rolls of thunder. Heavy fogs, so thick you can hardly see your hand in front of your face, sweep in out of nowhere. There is the odd man, Mister Fox, who roams around the town seeming to be invisible to everyone except Pru and ABE. The churchyard and forested areas have been invaded by giants. The town has been infiltrated by creatures from Norse mythology. There is even a rude talking squirrel!
On top of all this, Pru figures out that someone is lying to her. Who can she trust?

What I liked about this book:
These are solid characters. Pru, who is dealing with the death of her father, a police detective, is multifaceted. ABE is complex enough to be interesting. I liked that they have strengths that augment each other. At first Mister Fox is a dubious fellow, someone we are not sure if Pru and ABE can trust. Even the Norse gods, Odin and Thor, have qualities that show them to be complicated and flawed beings. Loki, who eventually reveals himself, is not truly evil.
Shaughnessy has created a believably ordinary town that is infiltrated by magical places and beings. I was right there with the characters in whatever realm they found themselves. I especially loved the idea of the chicken foot house. Honestly, my mind boggled trying to conceive of it.
This story is well written. Deep undercurrents of wisdom and philosophy abide beneath the surface, while above a saga of giants, witches and gods unravels. I highlighted many quotes:

"There's no such thing as just a story," he said. "After all, we're all stories in the end. Sometimes, even of our own telling. The trick is usually figuring out which bits of the story are true." p 20

“It’s all about belief,” Mister Fox called after them. "People believe too easily, today. When you believe in things, you close your mind to other possibilities." p 44

'There are whole worlds of difference between things that are true and the entire truth." p 218


What don't I like:
This is a book to curl up with and read without interruptions. It's my fault that I didn't do this. I tried to find time to read it at work. (Don't know what I was thinking, I never have time to read at work) When I brought my device home and settled into this story, I easily finished it in one sitting.

There are moments that felt a bit preachy to me - like when Mister Fox is trying to build Pru's confidence up so that she will do things she is afraid to do. But really, that is piddling compared to the great pleasure I took from this book.

I am looking forward to getting this title in my library. I liked that the main character is a young girl with the strength and courage to go beyond what she thinks she is capable of. I think all my readers, irrespective of gender will like this, and her too. Given that it is the first in a series, I'm pretty certain my readers will clamour for the next.

I read this title from Netgalley. It won't be published until September.
Posted by Cheriee Weichel