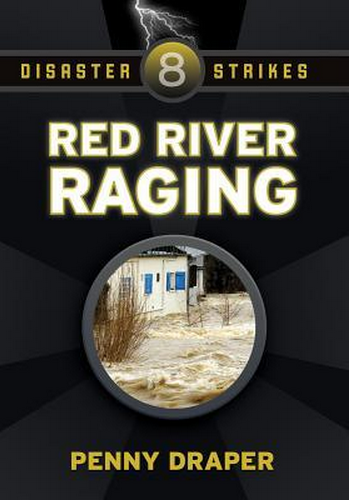 This is my third Penny Draper book. It won't be my last. The first was Ice Storm, an historical novel about the great ice storm in Quebec in 1998. Then I read Graveyard of the Sea, a tale based on a couple of famous west coast shipwrecks in 1906. This one, Red River Raging, is part of the same Disaster Strikes series. Red River Raging is set in and around Winnipeg, Manitoba, in 1997, when residents battled the flood of the century.

This is the story of a young teenage boy, Finn Armstrong, whose parents have landed a research project in Russia. Unfortunately, Finn doesn't get to go along. He is forced to go to St Agathe, a small farming community on the outskirts of Winnipeg Manitoba, and stay with his Gran and cantankerous great grandfather, Armstrong.

At first Finn is angry about his situation, but then starts to make friends and settle in to the community. He learns about the river from Peter, an old friend of Armstrong's, who teaches him about ice fishing and saves him from crashing through the melting ice of the river. It's when Peter gives him a carved catfish that things start to get strange.

It turns out that Peter is a ghost who visits select members of the Armstrong family to warn them of impending floods. The size of the catfish is a warning as to the magnitude of the flood. This one is almost as big as the catfish from 1826, the largest flood in recorded history.

Armstrong calls in some people who trust his knowledge of the river, and then everyone starts preparing for the flood. Finn and his friends organize a Flood Club, a group that goes around helping fill sandbags and building dikes.

What I loved about this book:


I recommend this one to all readers who like to read stories of people working together to battle the elements. I'm off to add the rest of the Disaster Series to my shopping cart.
Posted by Cheriee Weichel