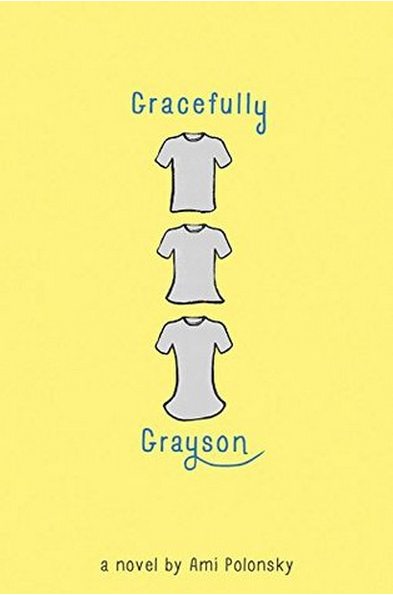 Let me begin by stating how glad I am that this book is here. I've been waiting for ages for a good middle grade book that deals with transgender issues. Gracefully Grayson will work perfectly in our elementary school library.

Grayson is a transgender girl. In her story here, we learn how she became brave enough to start to become outwardly, everything she already was inwardly.

She has lived with her aunt and uncle since her parents died when she was four. Most of the time Grayson tries to be invisible at school, all the while imagining her pants and over sized tops are skirts and dresses. Then she makes friends with a new girl, Amelia. When Amelia catches Grayson taking her first steps towards dressing like the girl she knows herself to be, Amelia not only shuns her, but tells Grayson's secret to everyone.

A couple of things happen to give Grayson hope. First, she lands the part of Persephone in the school play. Second, she discovers, through her mother's letters to her grandmother, that her parents were aware of her gender conflict and accepted whatever and whomever Grayson was going to be.

Unfortunately Grayson's aunt and uncle have a challenging time understanding and accepting her. At first they are upset about the letters and angry that the drama teacher, Finn, would offer the part to Grayson without consulting with them first. Eventually Uncle Evan comes to accept that this is what Grayson wants and becomes very supportive. However, Aunt Sally never really seems to figure Grayson out, although to be fair to her, I believe that she cares about her and wants what she thinks is best for Grayson. Unfortunately, for Aunt Sally, this means Grayson should stay the same and be safe. Grayson's older cousin Jack is mortified and angered by her gradual transformation, while her younger cousin, Brett, doesn't see what the fuss is all about.

In the theater Grayson finally finds acceptance from a diverse group of students. She gets to hang out with, and is accepted by the girls. In spite of this, there are a few students in the rest of the school who go out of their way to bully her, at one time actually causing her physical harm.

What worked for me:

These characters are exceptionally well developed. We even get to know Grayson's parents through the letters and her memories of them. Even negative Aunt Sally is shown as a real person with complex motivation. Grayson is the kind of individual my readers will be able to connect to and feel empathy for.

I liked that for the most part, the rest of the adult school population were positive characters. Finn was a remarkable risk taker in giving Grayson this chance. He must have been aware of the fallout that would ensue.

It's impossible for me to know how realistic Polonsky's portrayal of the transgender experience is, as it is not within my purview. A number of years ago we had a transgender girl at our school. Her experience was as positive as possible. Her classroom peers were accepting as over the few years she was with us she transformed her outer appearance to match who she really was. While some of Grayson's peers ignored her, she experienced some of the same kinds of support in her relationship with her peers in the theater.

What didn't work for me:

What bothered me is that this child has so much to wrestle with. Seriously, I would have thought that having a child deal with being transgender would be enough to come to grips with in one book. Having her have to cope with the loss of her parents and her grandmother on top of this, was over the top. It became a bit of a melodrama for me, and this got in the way of my connecting to the characters in the way I had hoped to.

My siblings, who are also teachers, often tell me that I don't work in the real world, but I believe that if we are prepared to put in the work, we will be amazed to see how respectful, kind and supportive our students have the capacity to be. I wish we had seen more of this kind of work in the book.

Thank goodness that Ami Polonsky is a very fine writer, and I wanted to love this book, or I might have abandoned it. I'm glad I didn't as I came to care about these individuals. I hope they all find their own happily ever after.