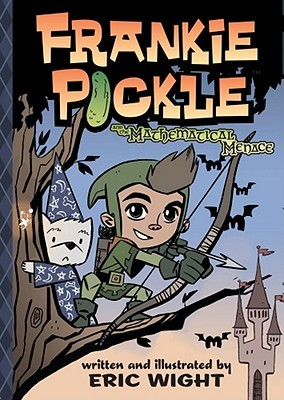 James at Kidsbooks convinced me to purchase this book, proving once again, that James is rarely wrong.
I am so glad I did. This book is infinitely fun. It integrates graphic novel with text. There is humour, but it is serious and sweet as well.
It's perfect for my readers starting to read real chapter books, and will probably entertain reluctant readers of all ages.
Frankie struggles with mathematics. After drawing all over his math quiz, his teacher gives him a second chance to write it. After telling his folks a tall tale about why he has to write it the following week, this is how they respond:
"That's a pretty incredible story," said Dad, trying to keep a straight face.
"It was so good, I'd like to hear it again," said Mom. "Only this time, without all of the made-up parts."
The problem is that when he studies, the numbers become squiggles and turn 'his brain to goo."
He has the best of intentions to study all weekend.
But he has to go with his mother to the grocery store where he runs around collecting coupons equal to a Captain Atomic comic he wants. After they get home, his best friend, Kenny, drops by to play a new version of Yugimon card games. The next day he is sidetracked from studying by his sister, Piper, who has: "transformed the backyard into her personal exercise facility, or as she liked to call it, her Playground of Pain." She convinces him to play a game of catch with him. Then, when he is determined to go inside and study, his father distracts him by getting him to help bake muffins.
Of course All these activities have been loaded with mathematical thinking, but you will have to read the book to find out if he passes the test.
We have one more in this series. I am most certainly getting more of them!!
5 stars