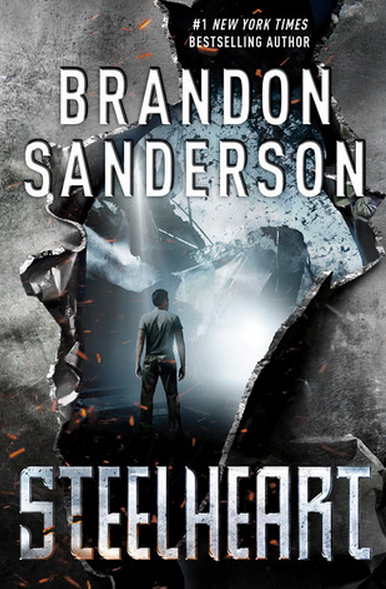 At first I wasn't enamoured with this book. I can see why so many of our students love it, but not only did it not pull me in, the main character, David Charleston, actually irritated me. Thankfully, it was the only audiobook on my phone, and so I continued to listen. It was most assuredly worth it.


Imagine a world filled with individuals with super powers. Now imagine that they are all evil. This is the premise behind Steelheart. A strange star, called Calamity, burst into the solar system and enabled ordinary individuals to develop these powers and become Epics. Epics have different kinds of powers. Some have more than one. While they all have a weakness, each one's is as unique as its power.

When David Charleston was 8, he watched Steelheart, a seemingly invincible Epic, kill his father. He barely escaped with his life. Since that time he has studied everything he can about epics. He's also researched the Reckoners, a group that searches out and kills them. More than anything else, David wants to watch Steelheart die.


David manages to introduce himself to the Reckoners and get accepted as a recruit.  Not only this, he manages to convince them to stop going after minor epics, and set their sights on Steelheart.

David is foolishly cocky. (I fear this is true of many young men and probably young women too.) He's smart but doesn't want to come across as smart. While he has amazingly detailed notes and the capacity to figure out so much about these two groups, he doesn't seem to have the capacity to envision the consequences of his actions. He also doesn't have the wherewithal to figure out that just keeping these kinds of notes is dangerous. I just couldn't buy into the scenario of this audacious kid making his way into the group and having this kind of influence over experienced adults.

It was only when these aspects dissipated that I got swept up in the story. I like adventure/mysteries that have many twists and turns, and this one has its share. I also appreciated the look at how power has the capacity to corrupt individuals.

My final quibble with this book is that while there are a few strong female characters, they are both in secondary roles. One of them ends up being more or less evil: a meme that I'm tired of. I just wanted more from these women.

In retrospect I can see why so many boys in my school like Steelheart. (After all, I did come to appreciate it!) They will clamour for the next in the series when it comes out. I'll get it for them, but I won't be reading it.