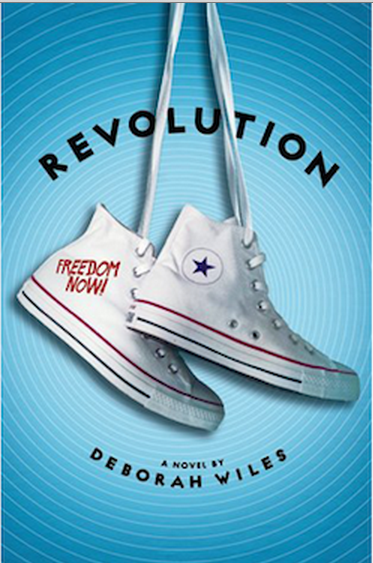 If I could only find the words, I'd gush all over about this book. Spectacular. Heartbreaking. Fascinating. Mind-blowing. Let's call that a good start.
Revolution is the second documentary novel in Deborah Wiles' The Sixties Trilogy. It tackles The Freedom Summer in Mississippi in 1964. Like Countdown, the first in the series, Revolution integrates fiction and nonfiction. Photographs, posters, newspaper headlines and quotes, music lyrics, and biographies merge with fine fiction writing to provide the reader with an exceptional history lesson. On the one hand we are exposed to the facts. On the other we vicariously experience what it means to have lived while they were taking place.

In 1964, Mississippi was flooded with a thousand or so black and white volunteers. These college students came from northern states to register black voters. It wasn't easy. Three young men, two white and one black, went missing on the first day. Media spotlighted Mississippi in the eyes of the country and the world. Yet in spite of the resistance, fear, and violence, over 80,000 black voters registered in those few summer months.
Against this backdrop Deborah Wiles crafts characters so rich and complex that it's hard to believe they aren't real. Raymond and Sunny are the same age. They live in the same town but inhabit separate social and cultural worlds: worlds that are about to collide in a fulcrum of peaceful protests and violent retaliation. Raymond is impatient. He wants to to grab onto liberty with everything in him, even if it means getting arrested over and over again. Sunny is struggling with complicated family issues compounded by discovering that good people can do bad things. She wonders, "Is there something wrong with me, or is there something wrong with the world?" They both have to learn that, "Being good is not a straight line. Being good is not being ever-obedient and never making mistakes. Being good is more complicated than that."
Here we have two characters aware of each other, connected, but not at all sure of what is going to happen and how they can learn to live together in a new way. This macro reality is played out in the micro reality of Sunny and her stepbrother, Gillette, struggling to merge their old families and create a new one.
This historical struggle reminds me, here and now, that it is our collective responsibility to ensure that we don't throw away what so many have sacrificed to obtain. Democracy is messy business. I'm left contemplating what this word really means. Neither noun nor verb, it's more of an ever evolving system of ideas. If we aren't vigilant, if we don't nurture and challenge it, we'll become complacent and then it can be deeply eroded or transformed in ways we won't want to live with.
These inherent political lessons are significant. Yet at its heart, this book is about the complicated love and dynamics that make family and community. Additionally, it's about the power we wield together.

As Sunny ultimately realizes,"I'm connected to everything. That's what the Westminster chimes are telling me in their ringing. Each of us is small, all by ourselves, but we are BIG, when we stick together."
Posted by Cheriee Weichel
Email ThisBlogThis!Share to TwitterShare to FacebookShare to Pinterest
Labels: Family, Friendship, Historical, Realistic Fiction, Social Responsibility