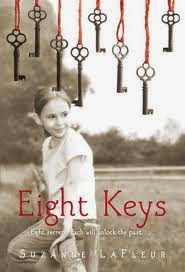 This was an almost perfect read. It's why realistic fiction is my favourite genre. In this one, small, sweet book, everything in the world that's important is revealed.

It's a book about relationships: losing them, finding them, and fixing them.

Elise Bertrand has just discovered that middle school is a whole lot more complex than elementary school. First, she shares her locker with a bully. Second, her relationship with Franklin, her best friend since she can remember, is falling apart. She knows she is responsible but doesn't understand what to do about it. Third, she's having trouble keeping on top of her homework and feels like a failure. In short, Elise's school and social life are disintegrating.

Elise lives with her Aunt Bessie and Uncle Hugh because her parents died when she was young. Every year she gets a letter left for her from her father. This one, on her 12th birthday, will be the last. It motivates her her take a key in the barn with her name on it and open one of the locked rooms on the top floor. Over the next year other keys show up that open other doors. Each room is set up in a way to deliver a message to Elise from her father, if only she can figure them out.

In the process of interpreting what they mean Elise finds the strength to deal with her school work, Franklin, the bully, and even make a new friend. Ultimately she comes to grips with who she is and who she is wants to become. Is there anything more important than that?