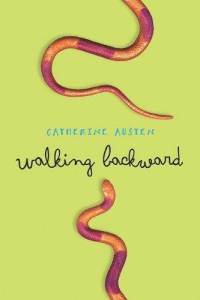 Josh’s mother had ophidiophobia – a terror of snakes. One summer day a snake slithered out from under her car seat. She panicked, lost control of the car, crashed into a tree, and died.

This is the story of Josh, a twelve year old boy, his four year old brother, and their father as they struggle to make sense of her death. Their psychiatrist gives them journals where they record their thoughts and feelings. This is Josh’s journal.
They cope in their own ways. Josh, a very smart kid, researches death rituals across different cultures and religions. He studies phobias. He also spends a lot of time trying to figure out how the snake got into the car. Was it put there deliberately? Was it an accident?
His father seems to have abandoned the boys. He spends time in the basement trying to build a time machine so that he can go back in time and remove the snake from the car.
This leaves Josh with the responsibility for the care of his little brother, Sammy. Sammy sleeps with Josh every night and continues to have conversations with their mother through a girl power ranger doll.
Eventually Josh and Sammy create a memory scrapbook of their mother so that they won’t forget her as they get older.
In spite of the heartbreaking topic, this book is full of many funny moments and some really great jokes. I resisted picking it up because of the topic, but once I started reading it I loved it. I loved the characters. I cried. I laughed. I couldn’t put the book down once I started. This was a very satisfying read.